Protests, plans, penalties: Stories you may have missed during the 2021-22 school year 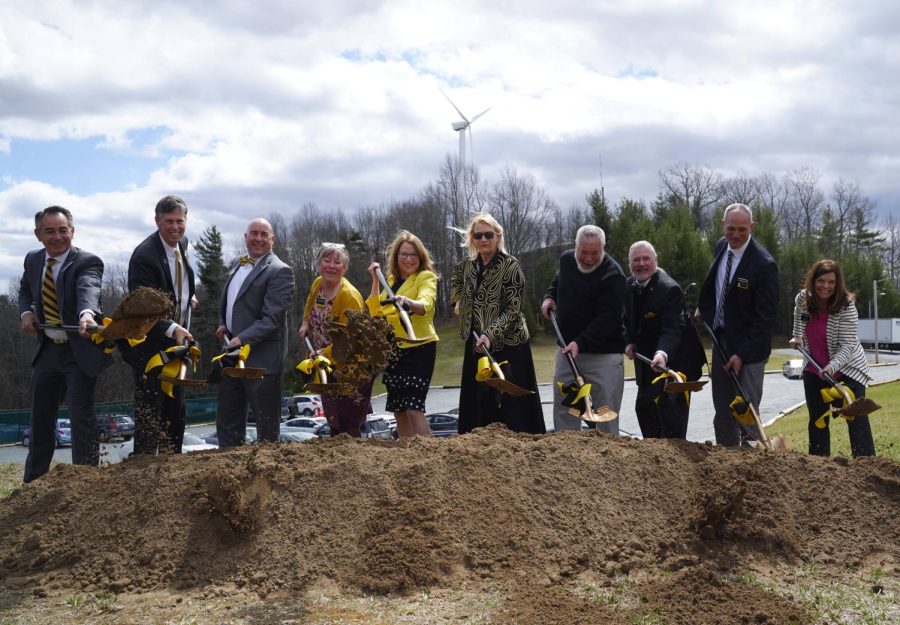 Chancellor Sheri Everts and others break ground on the Conservatory for Biodiversity Education and Research March 25, 2022. The Conservatory will be the first building of the university’s Innovation District.

The 2021-22 academic year was full of huge stories. So many, in fact, one might not have been able to keep track. Students have led marches against abortion bans, held a vigil for the war in Ukraine and even participated in the unionization of a Starbucks. Here are some big stories that one might’ve missed last year:

Amid life changing Supreme Court decisions, students took to the streets of Boone to protest in support of reproductive rights.

Last September, a student-led Planned Parenthood group led over 100 students in protest of a Texas abortion ban which banned abortion past six weeks of pregnancy.

In July, students and locals protested the Supreme Court decision overturning Roe v. Wade; a decision which erased the constitutional right to abortion, allowing states to make new specifications or bans on the procedure. During the protests, students and locals shared their stories and beliefs regarding reproductive rights, the federal government and trying to find solutions in the wake of on-going political change.

In November 2021, Chancellor Sheri Everts announced a future App State campus location; one that is not in Boone.

A new 225,800 square foot Hickory location was purchased for $1,017,293.64 and aims to increase the number of rural and first generation students who attend App State, according to an App State press release. This new location will serve the largest metropolitan area in North Carolina currently without a major public university campus.

Earlier this year, construction started on the first building in the Innovation District. The Conservatory for Biodiversity Education and Research has the aim of understanding the natural history and economic importance of our region and gaining a heightened appreciation of research and creative endeavors happening at App State, according to App State’s website.

Finally, the university board of trustees approved a new parking deck next to Holmes Convocation Center, designed to provide 600 new parking spaces to faculty, staff and students.

The Town of Boone was able to complete its goal of having all municipal operations use only renewable electricity eight years ahead of schedule, leading to recognition from local leaders and even receiving recognition via Tweet from Governor Roy Cooper.

Meanwhile, ClimACT, a local sustainability activist group, led protests as a part of the Global Climate Strike. Students, faculty and locals have joined the protests which have largely been adjoined to App State Board of Trustees’ meetings.

Michael Weiss, a community organizer with ClimACT, even wrote into The Appalachian, stating a belief that the activism led to the university’s increase from using 2% renewable energy to 15% renewable energy.

The 2021 local municipal elections brought a new mayor to Boone, along with five new members to the Boone Town Council.

In October 2021, Mayor Tim Futrelle told The Appalachian the biggest challenge facing the Town of Boone is the preservation of water, and said he plans to continue to promote environmental sustainability through Boone’s sustainable energy initiatives.

An April story from The Appalachian shows as Boone rent remains high, students and locals have struggled to find their feet. According to the 2021 NC Growth Housing and Business Resiliency in Boone report, the median home value in Boone is 50% higher than those in neighboring counties, while the median household income remains the lowest in the High Country.

One local, Angel Jackson, shared her story of her apartment flooding with sewage while she was giving birth to her child. An App State student shared their experiences of having mold grow under their floors and on clothes and furniture.

“They live in substandard places that have black mold and should not be inhabitable,” Carter said.

The Cottages of Boone face civil penalties and lawsuit

The Cottages of Boone, a student-housing complex located just outside of Boone, faced civil penalties from Watauga County and a lawsuit from an App State student. Due to unlawful dumping of nearly 100,000 gallons of untreated wastewater, The Cottages were forced to pay an undisclosed amount of money in civil penalties to Watauga County, according to a Nov. 16 press release.

Adam Zebzda, a senior political science major, filed a lawsuit against Watauga County in January 2021, requesting the North Carolina superior court division grant declaratory relief against Watauga County due to unlawful dumping. Zebzda claimed Watauga County has “constitutional and statutory obligations” to protect its land and waters and their inaction on the incidents would amount to negligence.

In January, Rose Hernandez, The Cottages community manager, said that alongside working with the North Carolina Department of Environmental Quality to comply with its permit The Cottages have taken measures such as replacing existing toilets, showerheads and kitchen and bathroom taps with “low-flow fixtures.”

Boone Starbucks is first to unionize

In December 2021, a Starbucks in Buffalo, New York, voted to fully unionize; becoming the first in the country to do so, according to NPR. The effort to unionize followed this development, and started after employees from the location submitted a plan to Starbucks interim CEO Howard Schultz declaring their plan.

Employees of the Boone Starbucks aim to “initiate a positive change for ourselves and our fellow partners, to provide encouragement for partners at other stores, to strengthen the unionizing movement and to secure a positive and safe working environment for all of the partners who will succeed us” according to a press release from Starbucks United Boone’s Twitter account.

App State students and faculty took to Sanford Mall on March 17 to hold a candlelight vigil in support of Ukraine.

After Russia’s invasion of Ukraine on Feb. 24, Andres Tellez, assistant professor of Applied Design, organized the vigil. Appalachian Advocates, Office of International Education and Development, International Appalachian and International Business Student Association were also a part of its creation, which gathered around 50-60 attendees.

Tanya Molodtsova, an economics professor from Ukraine spoke during the event.

“The heart of every Ukrainian in the world, whether they are in Ukraine or outside, is broken right now. Just watching how your country is being destroyed every day by the aggressor,” Molodtsova said.

Cafe Portofino, a local Italian restaurant and bar located off of Rivers Street, closed Jan. 11 to both disappointment and confusion.

Established in 2000, Cafe Portofino was adjacent to Ale House and other local restaurants like The Local. Employees of Cafe Portofino were initially told that it was to be closed indefinitely, according to Houston Holland, a former bouncer at the restaurant.

“It was just kind of random,” Holland said. “I know everybody was a little upset that it just happened out of the blue.”

Parson, who is also an associate professor in the Department of Finance, Banking and Insurance, served as interim chief diversity officer for a year following Fleming’s retirement.

On Feb. 20, faculty, staff and student senate bodies gathered for the first town hall in Belk Library to discuss concerns over the university’s response to various issues on campus.

Bailey Gardin, former student body president, spoke on the university response to George Floyd’s death in 2020, where on July 21, 2020, Black at App State held a Zoom meeting with the chancellor’s cabinet to discuss the organization’s concerns.

“The Black at App Collective was effectively silenced when a member of the administration muted every Black student’s microphone on the call. Black at App used the chat feature to ask to be unmuted but was blatantly ignored,” Gardin said.

In January, Richard Rheingans, professor in the Department of Sustainable Development, had written an open letter to students, writing the App State administration has “failed” in its pandemic response.

Rheingans spoke during the town hall, encouraging those in the community to “take responsibility for realizing a mission that’s been abandoned by others.”

“Many of us have learned that when we act together, the response from above is sometimes swift. We’re told to sit down and shut up,” Rheingans said. “Usually, that’s a sign that it’s time to stand up and to speak up.”