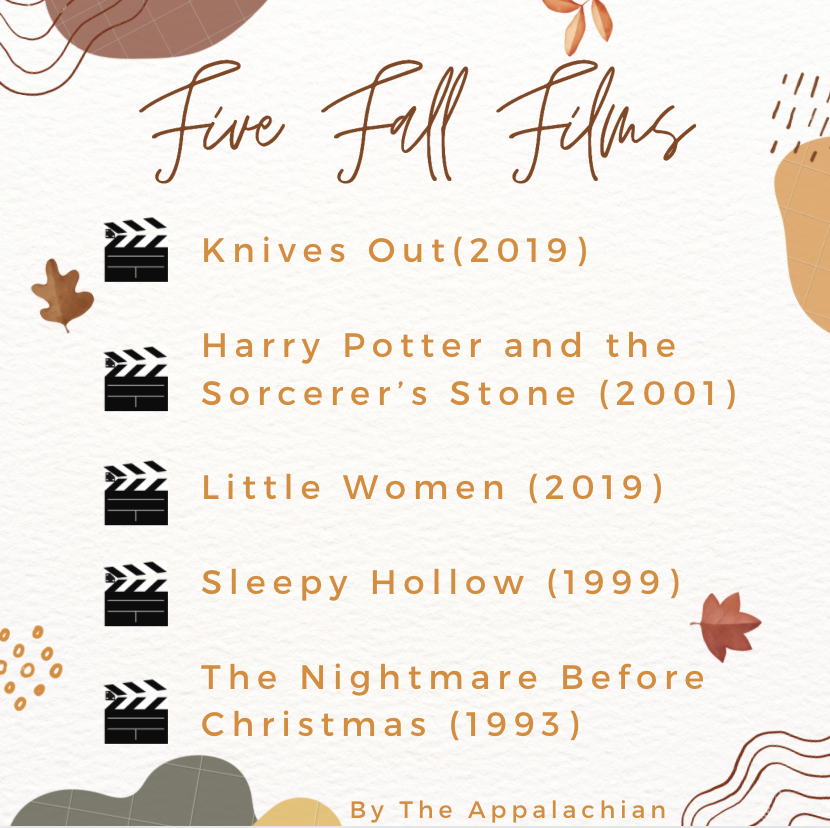 As the seasons change and the weather cools, you may find yourself spending more time inside than before. One of the best activities for a chilly autumn day is curling up under a blanket with a mug of something warm to drink and watching a movie. Compiled below are five different movies across several genres that are perfect for a fall-themed movie night, so be sure to take some time out of your busy schedule to sit down with a film you enjoy and just relax.

In this modern mystery, millionaire author Harlan Thrombey is found dead under mysterious circumstances in the aftermath of a family gathering. Respected detective Benoit Blanc is summoned to investigate, and he places every member of the Thrombey family under suspicion. “Knives Out” is filled with intriguing plot twists, surprising humor and just enough knit sweaters for this to qualify as a must-watch during the fall season.

The first in a series of magical films that captured the hearts of many children and adults alike, “Harry Potter and the Sorcerer’s Stone” was released almost 20 years ago and follows the adventures of young wizard Harry Potter. Harry must learn how to navigate a new school, make friends and, of course, defeat an evil wizard. Filled with witches, pumpkins and plenty of red and yellow scarves, fall is the perfect time to watch, or rewatch, this magical movie.

This recent remake of Louisa May Alcott’s most well-known novel tells the story of the March sisters’ growth into adulthood through the many seasons of their life. The four March sisters are vastly different people who fight and grow apart just as much as most siblings do but still find their way back to one another at the end of each of their tales. This particular adaptation of “Little Women” places a beautiful emphasis on the fall and winter holidays that will make you long for falling leaves and chilly days.

This light horror film is loosely based on Washington Irving’s “The Legend of Sleepy Hollow.” Set in 1799, the story follows Detective Ichabod Crane’s investigation into several mysterious murders in the small town of Sleepy Hollow. The town suspects a supernatural headless horseman as the culprit behind the murders, but they eventually discover the true force behind the horrors. Based on a classic Halloween fable and filled with plenty of haunting imagery, “Sleepy Hollow” is a great choice for your next scary movie.

This holiday time classic follows the adventures of Jack Skellington, Halloweentown’s very own pumpkin king, as he discovers the joys of Christmas. Deciding that Christmas is a much happier new holiday, Jack attempts to take Santa Claus’ role as Father Christmas. However, he quickly discovers that running Christmas isn’t as easy-going as he first imagined. “The Nightmare Before Christmas” is the perfect film to watch as the fall season ends and begins to shift into the holiday spirit, and it truly captures the essence of both Halloween and Christmas.