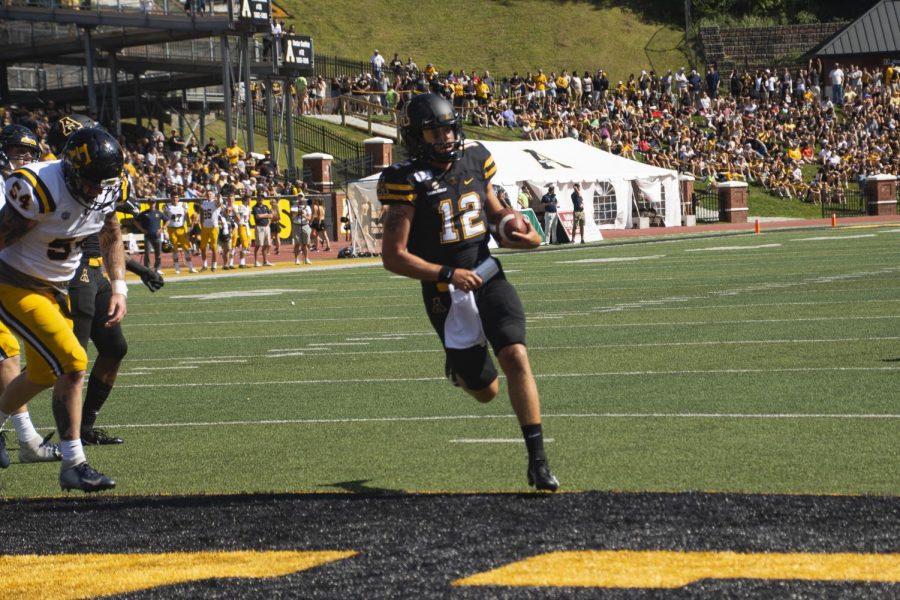 “It isn’t about preseason awards. It’s about postseason awards,” junior quarterback Zac Thomas said, understanding the pressure on his shoulders as App State heads into the 2019 football season.

Last year, Thomas had a different type of pressure on his shoulders — the pressure as a first-year starter replacing four-year Mountaineer great Taylor Lamb. Thomas withstood that pressure and delivered one of the best years a quarterback has ever had at App State. Thomas threw for 2,039 yards last season and 21 touchdowns to match. He also rushed for 504 yards and 10 touchdowns.

“Last year was great, but this is a new season, and you can’t think about the things you did last year when going into this season,” Thomas said.

Thomas, who wears No. 12, is operating under a new coach this season as former head coach Scott Satterfield left for the University of Louisville and was replaced by former NC State offensive coordinator Eliah Drinkwitz.

“Obviously the offense is a little different,” Thomas said. “The passing game is more in depth this year; there are a lot more routes. There will be more passing calls than (Satterfield) had, but obviously we still pound it on the ground.”

Despite the new face on the sidelines, Thomas has familiar wide receivers around him. Juniors Corey Sutton, Thomas Hennigan and Malik Williams all return. Sutton and Hennigan were top two on the team in receiving last year, while Williams finished fourth.

T“It is big time having those same guys around me,” Thomas said. “They know how I play, and I know how they play, and I think that will bring us more success.”

Thomas drew national attention this offseason but understands that nothing happens instantly.

“We take it game by game, and if we’re hoisting that trophy at the end of the year, if we have those awards, then we did our job,” Thomas said.

Four talented quarterbacks are stationed behind the Thomas on the depth chart. Jacob Huesman, who threw for 200 yards and two touchdowns last year returns as Thomas’s backup. Talented recruit David Baldwin-Griffin from California also adds some flavor to the mix as a dual-threat, left-handed quarterback from the IMG Academy in Florida.

“We are testing ourselves every week, knowing that if we do our jobs, then we get the wins,” Drinkwitz said.

A big 2019 season starts with No. 12. Thomas understands his job and what he has to do, and if he does it, then he said all those preseason awards will likely turn into postseason awards.