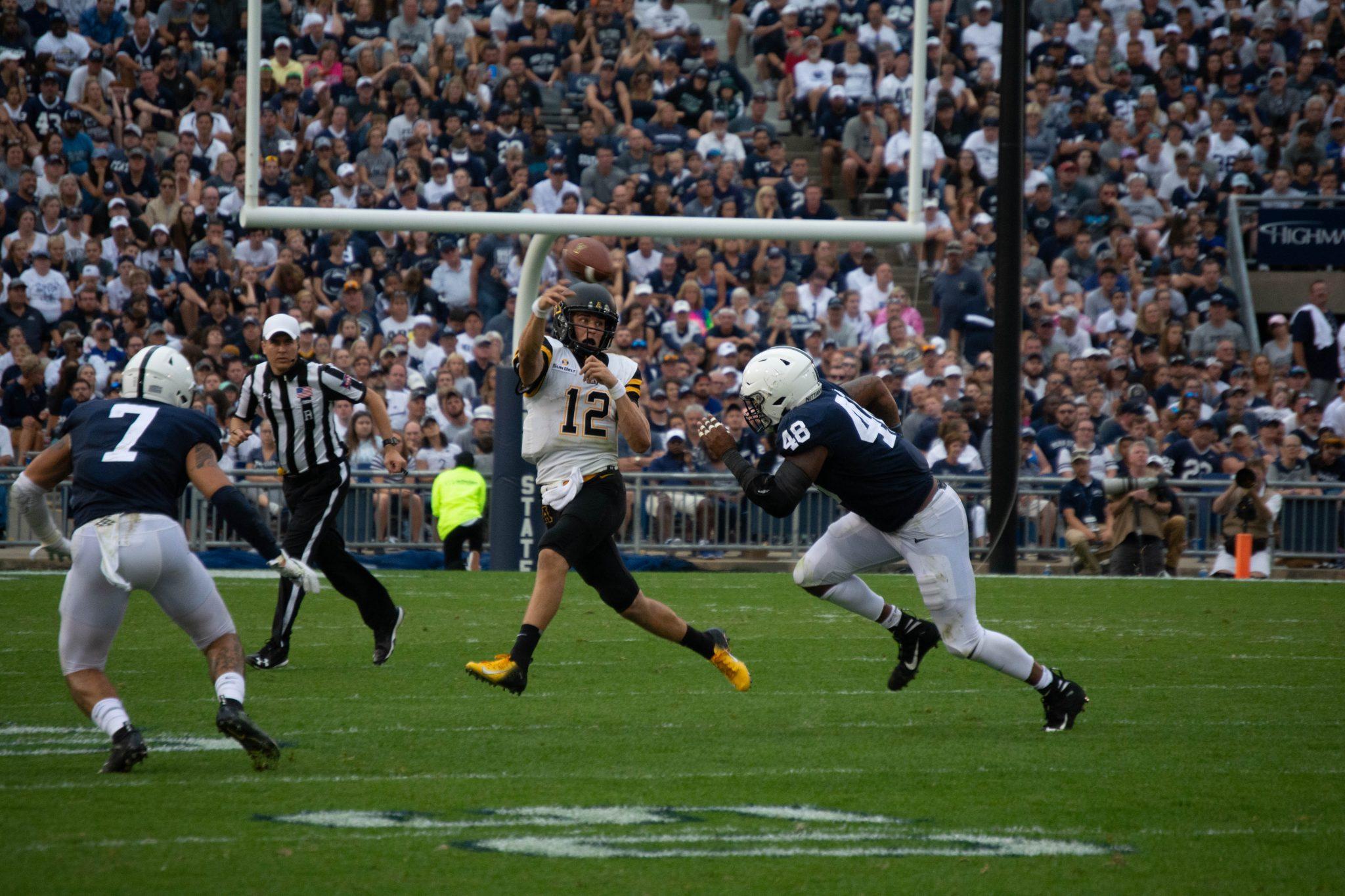 Redshirt sophomore quarterback Zac Thomas’ debut as the starting quarterback for the App State Mountaineers has been talked about since he arrived on campus before the start of the 2016 season, and even more so following four-year starter Taylor Lamb’s departure after the 34-0 Dollar General Bowl victory over Toledo at the conclusion of last season.

Lamb was great under center for the Mountaineers. He finished his career as the Sun Belt Conference’s all time leader in touchdown passes thrown with 90, so for coach Satterfield to come out and say this even before Thomas’ first start is setting a high bar for the young quarterback.

Satterfield isn’t the only person with high expectations for Thomas, either. He was named to the preseason third-team all-Sun Belt squad by Athlon Sports without having ever having made a start at the collegiate level.

Although he is largely inexperienced, Thomas has been involved with the team for a while. The 2018 season is the third year that he has been in the Mountaineer program. After his redshirt year in 2016, he was the backup quarterback in 2017 and totaled 33 passing yards with six completions on ten attempts. Thomas was able to work closely with Lamb in practice and on game days and learned a lot from him in his first two seasons.

“Taylor was an awesome figure just for leadership, he led the offense and he led the whole team, just in every aspect of the game,” Thomas said. “He taught me how to lead people in the right direction and that’s just one thing I want to do as being the starting quarterback.”

Although the Mountaineers return many of their offensive weapons from last year’s successful season in which they finished 9-4 overall, won a share of the Sun Belt Conference regular season championship and won the Dollar General Bowl by way of a shutout, they don’t return one of the single most important contributors: the quarterback.

“It’s extremely important to find a quarterback. You can look at the NFL all the way to Pee Wee, if you don’t have a quarterback you’re gonna have a hard time winning football games,” said Coach Satterfield. “For us, we feel like we’re in good shape with Zac.”

The time has finally come for Thomas to run the show and let people see what he’s got.

The 6-foot-1-inch 205 pound redshirt sophomore quarterback out of Trussville, Alabama, by way of Hewitt-Trussville High School made the first start of his young career on Saturday afternoon as the Mountaineers made their way to College Station, Pennsylvania, to take on the No. 9 Penn State Nittany Lions in front of a crowd of 105,232 fans.

Thomas impressed on Saturday, finishing with 270 passing yards and two touchdowns on a 65 percent completion rate to go along with his 43 yards and another touchdown on the ground while nearly willing the Mountaineers to the big time upset.

In the early part of the fourth quarter and at the beginning of the Mountaineers’ comeback, Thomas left the game for a play after taking a big shot and getting the wind knocked out of him. Redshirt freshman quarterback Peyton Derrick came in and completed a 22-yard pass that set Thomas up for a touchdown throw to sophomore wideout Malik Williams on the very next play to cut the Penn State lead from 14 points to just seven with 13:39 left in the game.

“He’s a competitor, that’s one thing I love about Zac. He competes his tail off and our guys feed off of that,” Coach Satterfield said. “When you go out because you got hit that hard, and you have to come to the sideline and we don’t even know if you’re coming back, and you come back the next play and go score– it’s incredible heart. That’s what our team is made of.”

Penn State eventually won in overtime 45-38 after senior cornerback Amani Oruwariye made an outstanding interception on a would-be game-tying pass in the end zone from Thomas.

“The corner made an unbelievable play. He reached right over top of Corey and made a great interception,” coach Satterfield said after the game. “That’s football, you have to be able to make the plays and their guy made it.”

After the starting debut that Thomas made, it will be a fun ride for the rest of the season to see how he handles the ups and downs of a full season of collegiate football. Thomas and the Mountaineers turned a lot of heads on a national scale with the performances they put up during the season opener.

App State will travel to UNC-Charlotte next week on Sept. 8th for a 6 p.m. matchup with the 49ers. It will be interesting to see how they respond going up against a non-Power Five team in their first action since the heartbreaking overtime loss in University Park