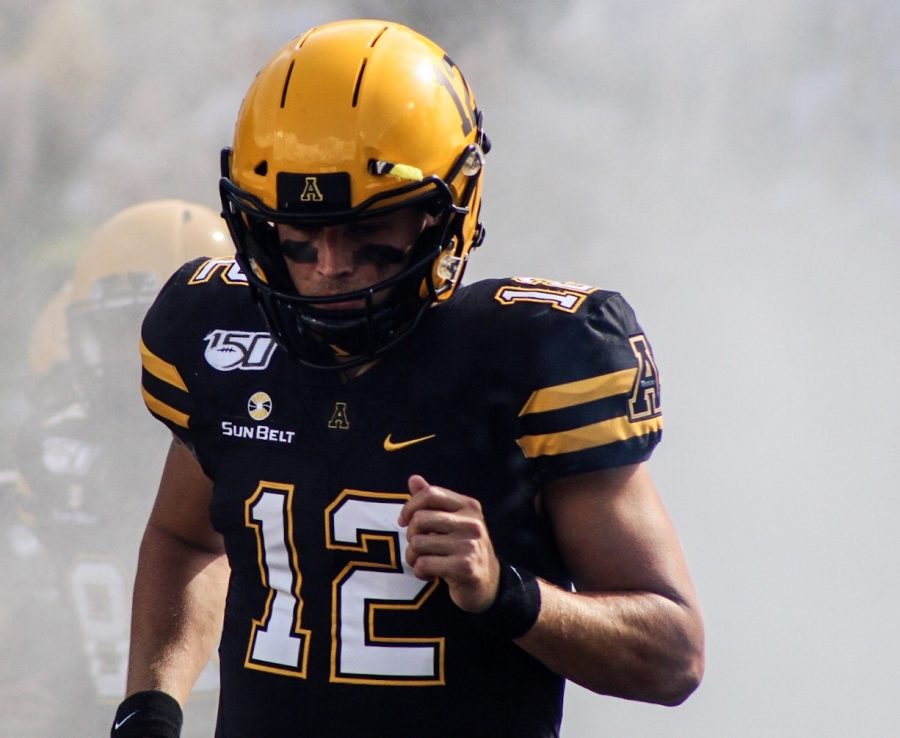 Heading into his 2020 senior season, App State QB Zac Thomas holds a 23-3 career record since being named QB1 before the Penn State season opener in 2018. Thomas takes the field before App State's game vs. Coastal Carolina on Sept. 28 last season.

Since being named App State’s starting quarterback before the 2018 opener at No. 10 Penn State, senior Zac Thomas has very rarely experienced losing. He’s won 23 games for the Mountaineers and lost just three.

“Zac’s a guy who, no matter what, I’m glad that we have him as our quarterback on Saturdays,” senior captain and wide receiver Thomas Hennigan said. “That guy is just a natural-born competitor.”

Head coach Shawn Clark said Thomas had looked a little shaky in practice leading up to the Penn State game and that the coaching staff was prepared for a backup plan if he didn’t do well.

“Once he got hit a few times and settled into his role as the leader of our offense, he’s taken his game, year in and year out, to another level,” Clark said. “I can’t say enough good things about him.”

Thomas went on to account for over 300 yards of offense and three touchdowns in that first game against Penn State, dueling with then-Heisman hopeful quarterback Trace McSorely on his home turf.

App State fans were excited for the future after seeing Thomas’ performance in such a high-stakes first career start.

The early excitement behind Thomas was justified when he was named the Sun Belt Offensive Player of the Year in 2018 after helping the Mountaineers to their third straight conference title and fourth straight bowl win.

In the two seasons Thomas has been App State’s QB1, the Mountaineers have elevated the program to heights previously unreached.

Last year, App State became the first FBS team from North Carolina to record a 13-win season. The Mountaineers also earned the Sun Belt conference’s highest ranking ever when they came in at No. 20 in the AP Poll after starting the season 7-0. App State finished the year at No. 18 in the Amway Coaches Poll after the New Orleans Bowl win over UAB.

Thomas, one of six captains in 2020, is roommates with a couple other App State captains and senior leaders in Hennigan and center Noah Hannon.

Hannon explained how it’s easier to go harder for your teammates on the field when you develop close relationships with them outside of football, like how he is with Thomas and other members of the team.

Thomas is clearly an important leader for the Mountaineers, but he isn’t always as vocal or outgoing as some of his teammates.

“Zac is a great kid, a little bit quiet til you get to know him,” offensive coordinator Tony Petersen said. “He’s not going to let you in too quick, which I totally understand.”

Hennigan agreed that Thomas often keeps to himself and goes about his business, but pointed out that he is a great leader and communicator despite not being the loudest guy in the locker room.

“He leads by example, and I think I’d rather have that from my quarterback, rather than someone who’s dancing or singing around all the time,” Hennigan said. “People need to understand that Zac is vocal, but it’s not the ‘loud’ type of vocal… (He’s) very good at communicating with me as a receiver, and the O-line, and the coaches I know really enjoy having him as a quarterback.”

Mountaineer faithful across App Nation love and appreciate Thomas for what he’s helped the program accomplish. But his teammates and coaches are just as appreciative, if not more, for their reliable QB1.

“Without a doubt, he’s a winner, and a fierce competitor,” Hennigan said. “I’m just so blessed to have a quarterback who fights like that on Saturdays.”