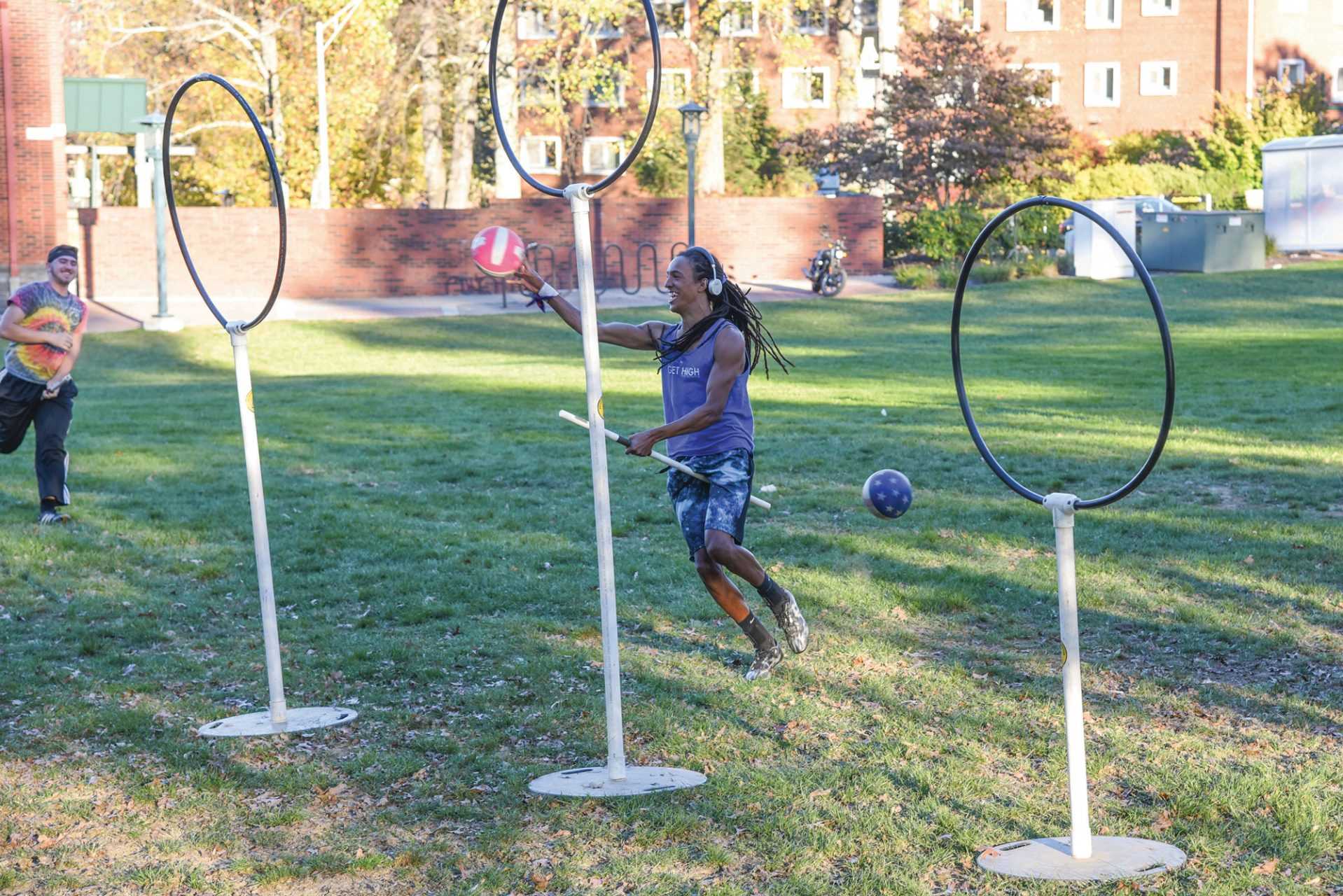 Brandon Poole throws the quaffle through one of the hoops to score during practice last October. The Appalachian Apparators practice every Tuesday and Thursday on Duck Pond Field.

If you stroll or ride past Duck Pond on a Tuesday or Thursday night after 5 p.m. you are bound to see something that looks familiar: three poles, all different sizes, sticking from the ground with a large hoop attached to the end of each one. You would also see a deflated volleyball being tossed at these hoops by various players running around while holding onto their ‘broomsticks’ underneath their legs. The field looks like something out of your favorite J.K. Rowling novel, and that’s because it is.

The Appalachian Apparators, App State’s very own Quidditch team, was formed in 2009, according to the website for the United States Quidditch Association. One of the first teams to begin to play the sport in North Carolina, the Apparators started what was at first a trend but now a popular club sport.

The basic rules of Quidditch stem from the beloved “Harry Potter” novels but according to junior chaser Luke Siegfried, the game has taken “a more professional turn in the past few years. At first it was just a bunch of friends running around pretending it was Quidditch, but now we have the United States Quidditch Association as an overarching body for all teams and they produce a rulebook each year that everyone should follow.”

These rules include the normal game rules, such as number of players and length of games. It also includes some more advanced social rules for 2018. There are six players, three of which are chasers. The chasers are the players attempting to score the quaffle, or deflated volleyball, into the large hoops for points.

All chasers must “always have one hand on their broom, which is actually a long piece of pvc pipe, and if they drop their broom they will be penalized. Much like how in basketball you have to dribble or in soccer you can’t use your hands,” Siegfried said.

Along with the chasers you also have two beaters, whose main goal is to knock chasers off their brooms with bludgers. The bludgers in the QSA aren’t iron balls like in the wizarding world, but instead they are three small dodgeballs. Siegfried has been a member of the team since he was a freshman and said he believes that the beaters can control the game.

“The beaters can really determine if the chasers score. They are the defense. If they hit a chaser holding the ball with bludgers then the chaser has to physically remove his or herself from the broom and drop the ball in place, then run back to his hoops and touch each hoop before reentering play,” Siegfried said.

Attempting to stop the chasers that get past the bludgers is the keeper, whose job is exactly how it sounds. The keeper is like the goalkeeper in any sport, his or her one job is too prevent the opposing team from scoring in the hoops. The hoops range from 3 feet to 6 feet. The 6-foot-hoop is in the middle while a 3-foot and a 4.5-foot-hoop stand by its sides.

There is also the seeker and the snitch — the part of the sport that most Harry Potter fans remember. Harry sometimes had trouble with the snitch and so do the players in the QSA. This is because after the 18 minutes of regulation finish the snitch reveals itself. In this league the snitch is a person dressed in yellow with a small tail and nothing they want to do to the seeker to prevent being caught is off limits.

They can push the seeker, they can tackle him, they can even take the seeker’s broom and throw it across the field to stay in play. Siegfried said the longest he has ever seen one go was “20 minutes — and it was for the other team.”

Now along with the basic rules of Quidditch there are also some social rules that each team must abide by when putting their team onto the field. There are rules in place to make sure the teams truly are co-ed, Josh Bartlett, junior chaser, said.

“No more than four of one gender on the field. This is an important rule in any co-ed sport, but especially in our day and age it allows for a team composition to be representative of who we are as a country today,” Bartlett said.

Bartlett is a former beater who will be switching to chaser this year. He is also one of the team captains. He believes this rule is great because it allows “the opportunity for non-binary, female, and male players to all be represented in a time where representation is so important. I believe that this rule definitely helps female players make sure they have field time, although we as a team are almost evenly split so we wouldn’t notice much change without the rule.”

Barlett and Siegfried are both juniors who have been playing Quidditch since their freshman year and thoroughly enjoy the sport. Bartlett said it’s tough to determine what he loves most about it but the relationships are what mean the most to him.

“Probably the supporting and family-like relationships that the team members have with each other (are my favorite),” Bartlett said. “At no point is it only about how well can we play it’s more like we are here to have fun and enjoy hanging out,” Bartlett said.

Both said they expect the team to be good this year. They play in tournaments all around the United States and look forward to winning a few this year.

“There will be a tournament in Boone in early October, round robin style,” Siegfried said.

The date has yet to be set but when it is they will make sure they get an announcement out so that anyone can stop by and watch the game. They also welcome anyone who wants to join. They have two teams this year — a black and a gold squad. Practices take place from 5:15-6:45 p.m. on Tuesdays and Thursdays at Duck Pond.

So if you’re a fan of “Harry Potter,” a fan of a friendly environment, or looking for a new physical activity stop by Duck Pond. In the world of Quidditch, everyone is welcome.