Race against time: 24 hours to put on a show 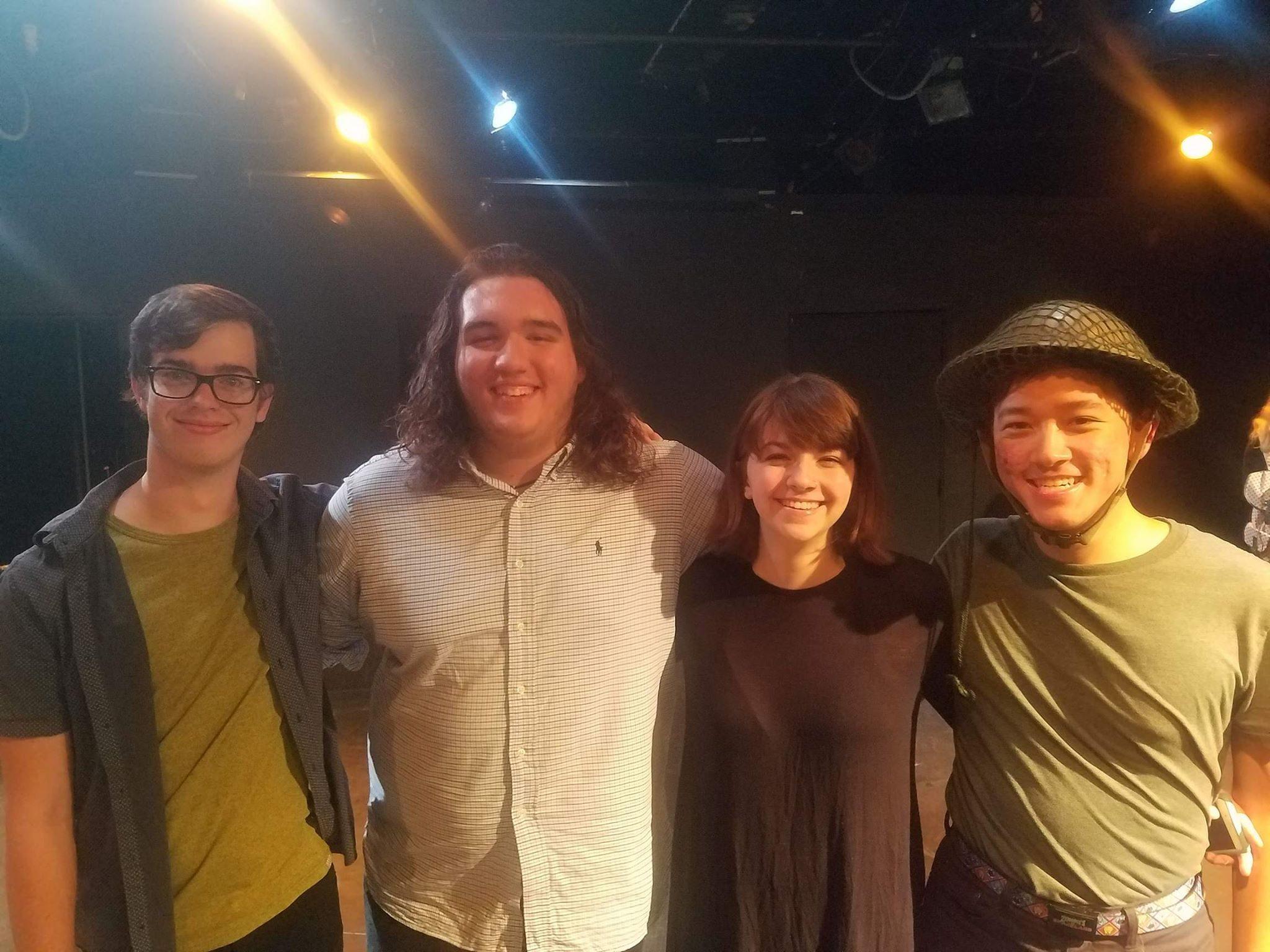 Andrew Wilson, Joe Purdue, Alyssa Overton and Ian Lee stand together after their performance Sunday. They were the cast of the play "Yes Drill Sergeant."

Playcrafters presented the fourth annual 24 Hour Arts Festival in the I.G. Greer theater on Sunday. The festival is compiled of one-acts led by students who begin the process of writing, casting, directing and rehearsing 24 hours before the actual performances.

“I’ve done the 24 Hour Arts Festival since my freshman year. It was like my first way I got involved in the department, and I just wanted to have a way to perform,” Julia Ridenhour, a senior performing arts major, said. “I acted in it the first two years I did it, I directed last year and then this year I decided I wanted to produce it.”

The festival is an easy way to get involved with theater on campus as it is generally all-inclusive and welcoming of anyone regardless of grade, major or interests. As well as acting, students can participate through directing or writing. Dance routines were a new addition this year, meaning students can dance or choreograph in the following years.

“[The festival] really brought me out of my shell because the first time that I performed in it, I hadn’t done anything with Appalachian yet. I hadn’t been involved in our theater department at all, so I was really nervous, I didn’t know anybody. But it really got me out of my shell and encouraged me to meet new people and just go for it,” Ridenhour said.

If students are not interested in participating, all are welcome to attend the performances free of charge and seating is on a first-come, first-serve basis.

The performances at this year’s festival included scenes about the ultimate quest to manhood, bad dreams, a drill sergeant, an aching tooth, a Willy Wonka interrogation, a meeting of villains and a dance duet.

Every year, each of the writers are given a phrase they have to somehow incorporate into their script. This year the phrase “you gotta stand in jello before you have dessert,” made its way into every scene excluding the dance number.

Performer Kat Sokol, freshman theater and English major, said it was very difficult to stay up for 24 hours to perform.

As the staging was a mix between black box and a thrust stage, the audience surrounded the performers on three sides, the back serving as backstage and exits and entrances. Being so close to the performers made friends in the acts recognizable to audience members.

“I thought [the show] was really cool and interesting,” Urh said. “I have some friends in the show and I am also super interested in theatre.”

Thoroughly experienced in the festival, Julia Ridenhour recommends anyone interested in getting into theatre to participate in the 24 Hour Arts Festival in the coming years, and assures that there is room for everyone.

“It’s such an easy way to get involved because everyone gets to participate in it. If you want to act in it, you’re guaranteed a spot,” Ridenhour said. “We’ll make sure we have enough roles for you.”