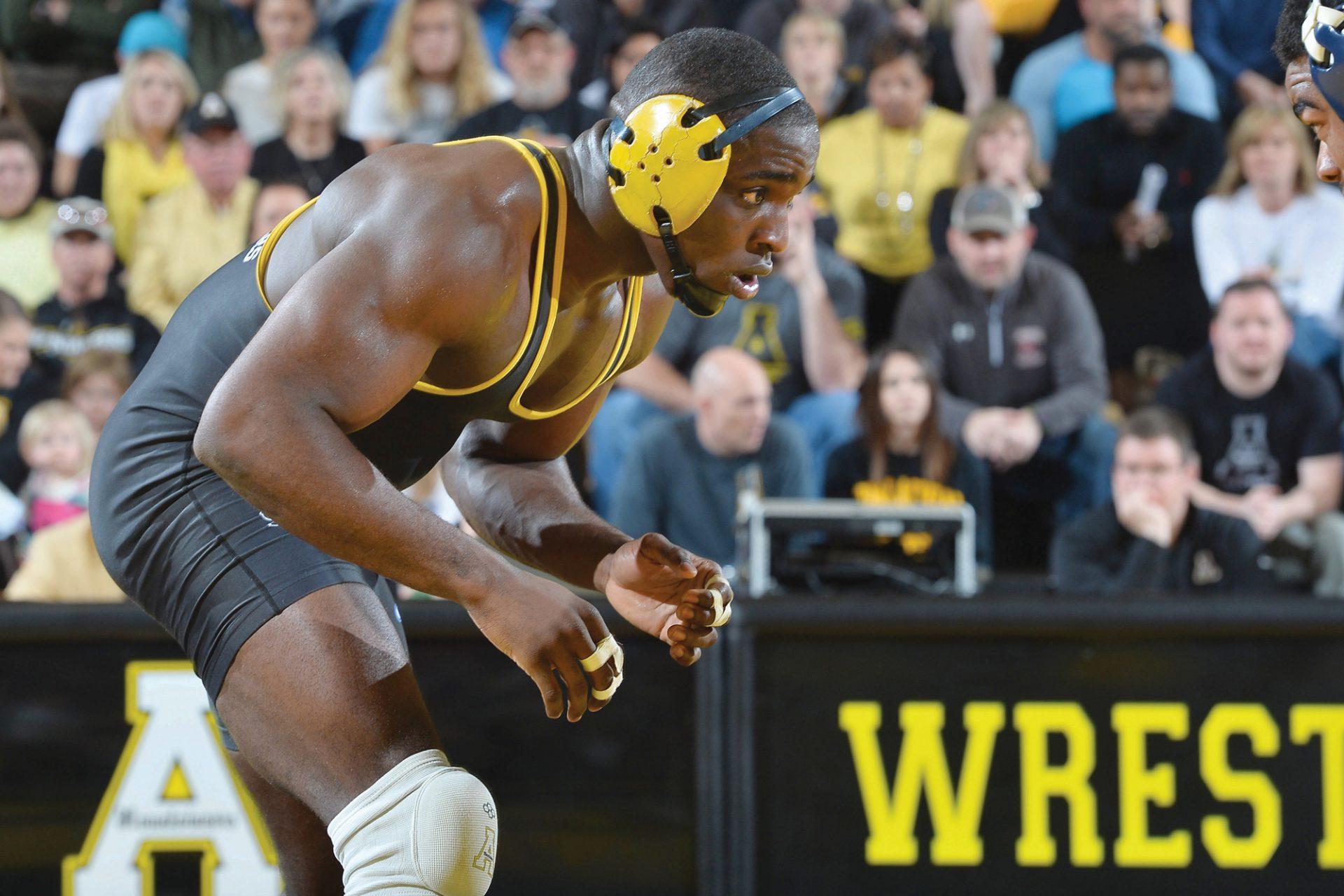 Senior Randall Diabe taking on a UT-Chattanooga opponent in Varsity Gym during the 2017 season.

Head wrestling coach John Mark Bentley has a young team this season. Of his 30-man roster, there are five active seniors, including two possible All-Americans.

Senior Irvin Enriquez was a preseason All-Southern Conference wrestler for 2018 after his impressive 2017-18 performance. The Aberdeen, North Carolina, native finished 17-13 with a victory at the Southern Conference Tournament for the 141-pound weight class.

Enriquez has been a consistent member of the starting roster since his debut in 2015. With a victory at the Southern Conference tournament, Enriquez has his sights set on national achievements.

“I want to be an All-American,” Enriquez said. “We’ve won the Southern Conference, it’s time to think forward.”

Senior Randall Diabe is another preseason All-Southern Conference wrestler who hopes for national recognition this year. He has been another key member of Bentley’s wrestling team since he graduated from Dudley High School in Greensboro.

Diabe finished 2018 20-9 overall at 191 pounds while also earning third place at the Southern Conference tournament and his first invite to the NCAA tournament.

Diabe’s nine losses all came out of conference, meaning he finished his 2018 season perfect in conference play. His consistency at 191-pound weight class helped App State stay competitive in its conference matches.

“We need to work on our identity as a team,” co-head assistant coach Ryan Leblanc said. “Our seniors are important to helping establishing that identity.”

Senior Michael Elliot comes from Jefferson as a former 2-A state champion at the 152-pound weight class. Elliot finished his senior year of high school 36-2 before coming to App State in 2015.

Since making his Mountaineer debut in 2016, Elliot has a career record of 10-12 overall, including a seventh place finish last year at the Keystone Classic.

Senior Angel Najar rounds out Bentley’s roster as the final senior wrestler. Najar is originally from Bethel and made his debut in 2015 after an impressive high school career at North Pitt High.

Najar was a four-time state qualifier and the 2-A state champion at 160 pounds as a senior. That victory capped off a 59-1 season overall.

“We have a lot of leaders on this team,” Bentley said. “We want some All-Americans; we’ve become a program that expects them at this point.”

App State’s seniors look to lead their young team back to the Southern Conference Tournament again. Further ahead, some of the seniors hope to earn All-American honors in their final year at App State.

Photo By: Courtesy of Tim Cowie