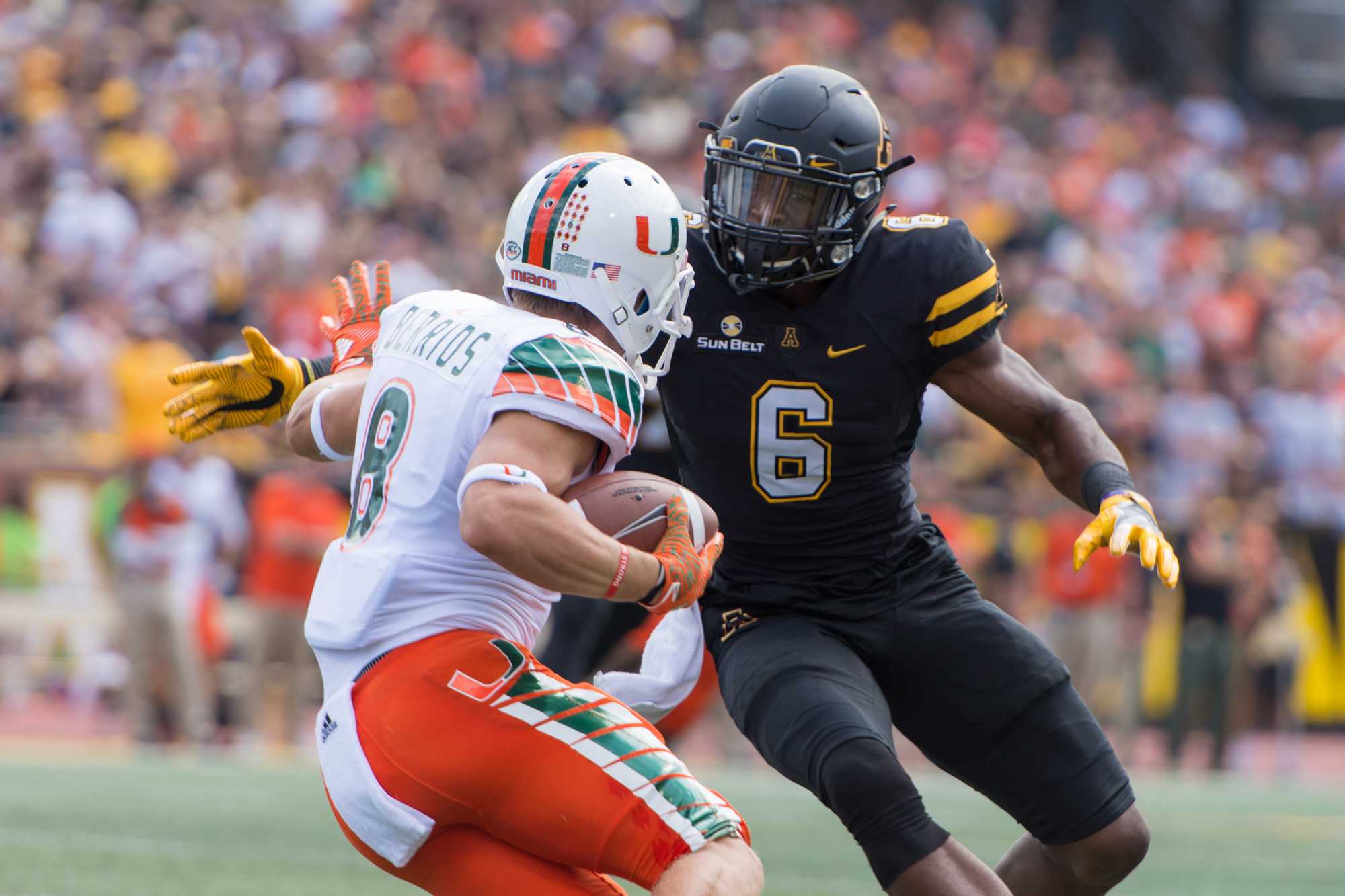 Coming off of a solid performance at Tennessee and a dominating win against Old Dominion, the Miami Hurricanes were on upset alert this week and the Mountaineers were picked by some to pull it off, entering the game only as a 3-5 underdog.

The Mountaineers aimed to get their first win against a ranked opponent this season against No. 25 Miami, but fell short 45-10. The Mountaineers move to 1-2, already having as many losses as last season, and Miami moves to 3-0 on the season.

The Kidd Brewer Stadium attendance for today was at 34,658 fans surpassing the last record set on October 9, 2010 during a game against Elon, which totaled 31,531.

John Law intercepted a pass thrown by Miami quarterback Brad Kaaya on the Mountaineer goal line and returned it to the Miami 37-yard line.

That interception then led to a Taylor Lamb touchdown pass to senior tight end Barrett Burns for 24 yards.

That touchdown pass was Lamb’s 50th of his career.

Junior Zy Letman got his first career reception as a Mountaineer on a catch that went for 22 yards.

Miami running back Mark Walton took the first Miami play from scrimmage 80 yards for a touchdown.

Cox left the field at the end of the first quarter and had some stretching done to his left knee. He didn’t return for the rest of the half.

Cox would later be officially ruled out for the rest of the game with 10:30 left in the third quarter.

Kicker Michael Rubino missed a 41-yard field goal at the end of the half.

Defensive mishaps from the Mountaineers would prove to be a theme throughout the game as two missed tackles led to two separate touchdowns for the Canes as well as a blown coverage leading to a 55-yard touchdown pass.

Penalties also proved to be big with App State ending with 5 for 58 yards. One of which being a holding call that brought back a Marcus Cox touchdown run of 79 yards.

The Mountaineers fall under a .500 record for the first time since they were 4-5 in November 2014.

The students came out in full force today filling up the student section at 10:00 am, two hours before kickoff as well as the hill filling up 30 minutes’ prior.

Miami scored early and often totaling only 25:36 in time of possession, with most of their touchdown drives finishing under three minutes.

Brad Kaaya and the Canes threw most of their passes out to the flats on wide receiver screens, giving the Mountaineers difficulty all day.

Kaaya totaled 21-27 passing with 368 yards and three touchdowns along with an interception.

On the other hand, Taylor Lamb only went 10-21 with 115 yards and one touchdown and interception on the day.

Also the defense couldn’t get much pressure on the Canes backfield with only one sack coming from junior linebacker Eric Boggs. And as a team there were two total quarterback hits throughout the game.

Next week the Mountaineers travel up to Akron, Ohio to take on the Zips on September 24 at 3:30 as they hope to move back to .500