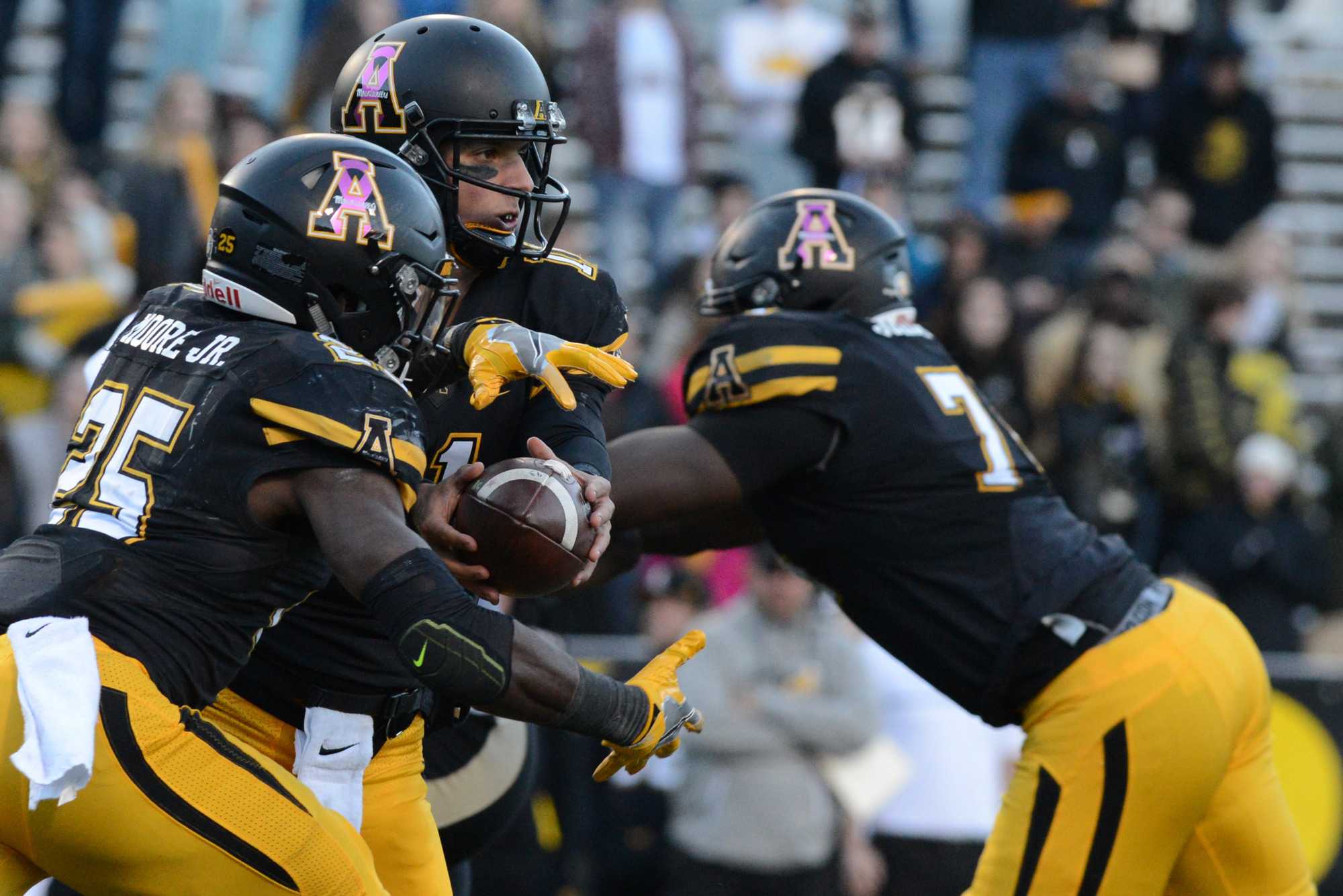 After a defensive first half, App State (5-2, 3-0 Sun Belt) stayed undefeated in Sun Belt conference play pulling away in the second half to defeat Idaho (4-4, 2-2 Sun Belt) 37-19.  App State continues to only have four losses in their last 26 games only losing to Tennessee, Miami, Clemson and Arkansas State.

Bentlee Critcher only punted three times in the game.

Junior quarterback Taylor Lamb rushed for his third-rushing touchdown of the season on a two-yard rush to give App a 10-0 lead in the first quarter completing an 80-yard drive.

Wide-receiver Mock Adams caught two passes including a long 18-yard pass for a key first down early in the game.

Freshman running back Darrynton Evans rushed for a big 25-yard gain to put App on the two-yard line leading to Lamb’s touchdown.

App State would stop Idaho from scoring a touchdown on three of their red zone trips.

Sophomore running back Jalin Moore picked up a big 31-yard rushing gain with six minutes left in the first half.

App finished the first half with a consistent 85 passing yards and 84 rushing yards.

Receiver Zy Letman connected with Lamb for a season-high five receptions and 68-yards including a 30-yard catch.

The 30-yard catch would be the longest reception of the night.

Defensive end Dezmin Reed had his fifth sack of the season. Second on the team.

Lamb started the second half with a 15-yard pass to senior receiver Shaedon Meadors then a 20-yard pass.

Lamb went eight-for-eight in passing in the third quarter.

He surpassed 7,000 yards of offense in his career.

Freshman cornerback Clifton Duck had the biggest play of the game with a 44-yard pick six to give App a 20-6 lead.

The interception was his third of his career and his first career touchdown. He would catch his fourth career interception in the fourth quarter and second of the game.

App State went six-for-six in the red zone on the night.

Moore rushed for a five-yard touchdown, his sixth of the season.

The touchdown was Jones second of his career and first of season.

Lamb struggled to score in the red zone early on having the Mountaineers settle for three field goals in their first four trips.

Idaho quarterback Matt Linehan was red hot in the first half and finished 13-16.

Lamb fumbled the ball on first snap in second quarter but recovered it. He fumbled for again late in the game and Idaho recovered it in App’s territory.

Idaho had 138 first half passing yards compared to App’s 85.

The Mountaineers were only able to knock out three penalties from the Vandals.

Linehan threw the only Vandals touchdown with five seconds remaining in the game.

Idaho was also perfect in the red zone going four-for-four.

App State dominated on defense once again despite a garbage time touchdown.

The Mountaineers intercepted Idaho’s Matt Linehan three times and had there first six-pick of the season.

Clifton Duck finished with two of the three interceptions and his first touchdown.

Linebacker Eric Boggs led the team with seven tackles. Despite no player have double digit tackles, 10 different players have more than two tackles.

App finished with four sacks on the night.

Despite both teams scoring on every trip in the end zone, touchdowns seemed to be a struggled for both the Mountaineers and Vandals.

App State would have to settle for field goals in three of their first four red zone trips.

Idaho did not even score a touchdown until the final five seconds of the game.

Having one of the best kickers in the country, Idaho had no problem kicking field goals and even hit a 46-yarder.

App State also was a perfect three-for-three on field goals.

The App State receivers had the best all around game of the season.

Five different receivers had multiple receptions and Meadors and Zetman both had season high receptions.

Meadors finished with 106 receiving yards and Zetman had a season high 68 yards.

App State totaled 246 receiving yards with 187 yards in the second half.

App State will have a short week and travel to Georgia to take on their biggest conference rival Georgia Southern for a Thursday night showdown at 7:30 p.m. App defeated the  Eagles last season on Thursday night in Boone and holds a 16-13-1 all-time record against them.