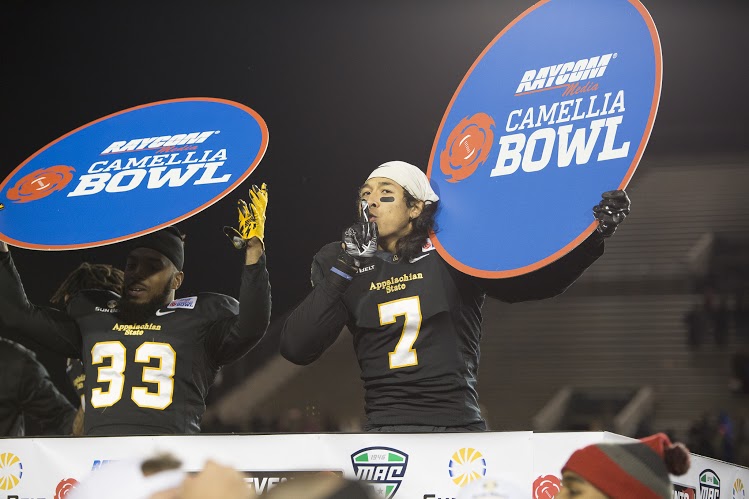 The Mountaineers won their eleventh game of the season 31-29 over the Ohio Bobcats, breaking the record for single-season Sun Belt victories and securing their first NCAA bowl victory.

It might be stating the obvious, but the best thing that came from tonight was Appalachian State’s first bowl win in program history.

What’s even more impressive is that it came in their first year of bowl eligibility at the FBS level.

What’s even more impressive than that is how they won. The come from behind victory was one of the most thrilling games Appalachian has played in recent memory. App State was down 24-7 entering the fourth quarter, and within two minutes, they were up 28-24. Then it all came down to Zach Matics and Taylor Lamb. Trailing by one point with under a minute and a half to go, Lamb orchestrated a drive using both his arm and legs to get the Mountaineers into field goal range.

Then Matics, who had missed both of his field goal attempts earlier in the game, came in the clutch and was able to hit the game winner from 23 yards out as time expired.

While the comeback was exciting, it should have never happened.

Ohio had a similar scoring burst late in the first half, scoring 17 unanswered points in the final 1:31 of the second half to take a 17-7 lead. They scored the majority of those points off of Taylor Lamb turnovers. Lamb had a fumble and threw an interception, both leading to Ohio touchdowns.
Beyond the turnovers, personal fouls and injuries were two huge cruxes for the Mountaineers.

Three Appalachian State records were either tied or broken in the Camellia Bowl.

Taylor Lamb broke Armanti Edward’s record for touchdown passes in a single season. Lamb threw 31 touchdowns this season, surpassing the 30 touchdowns that Edwards threw in his 2008 campaign. Perhaps what makes Lamb’s feat more impressive is the run-heavy nature of the offense this season.

Marcus Cox has tied the Appalachian State school record for most 100-yard rushing games in a career with 22. Cox ran for 175 yards and a touchdown in the Camellia Bowl, earning him the Bart Starr MVP award. Cox should be the lone record holder sometime next season.

Barrett Burns also tied a school record — this time for single-season touchdowns caught by a tight end with eight. Burns, known for his blocking, was one of Lamb’s favorite red zone targets all season long.