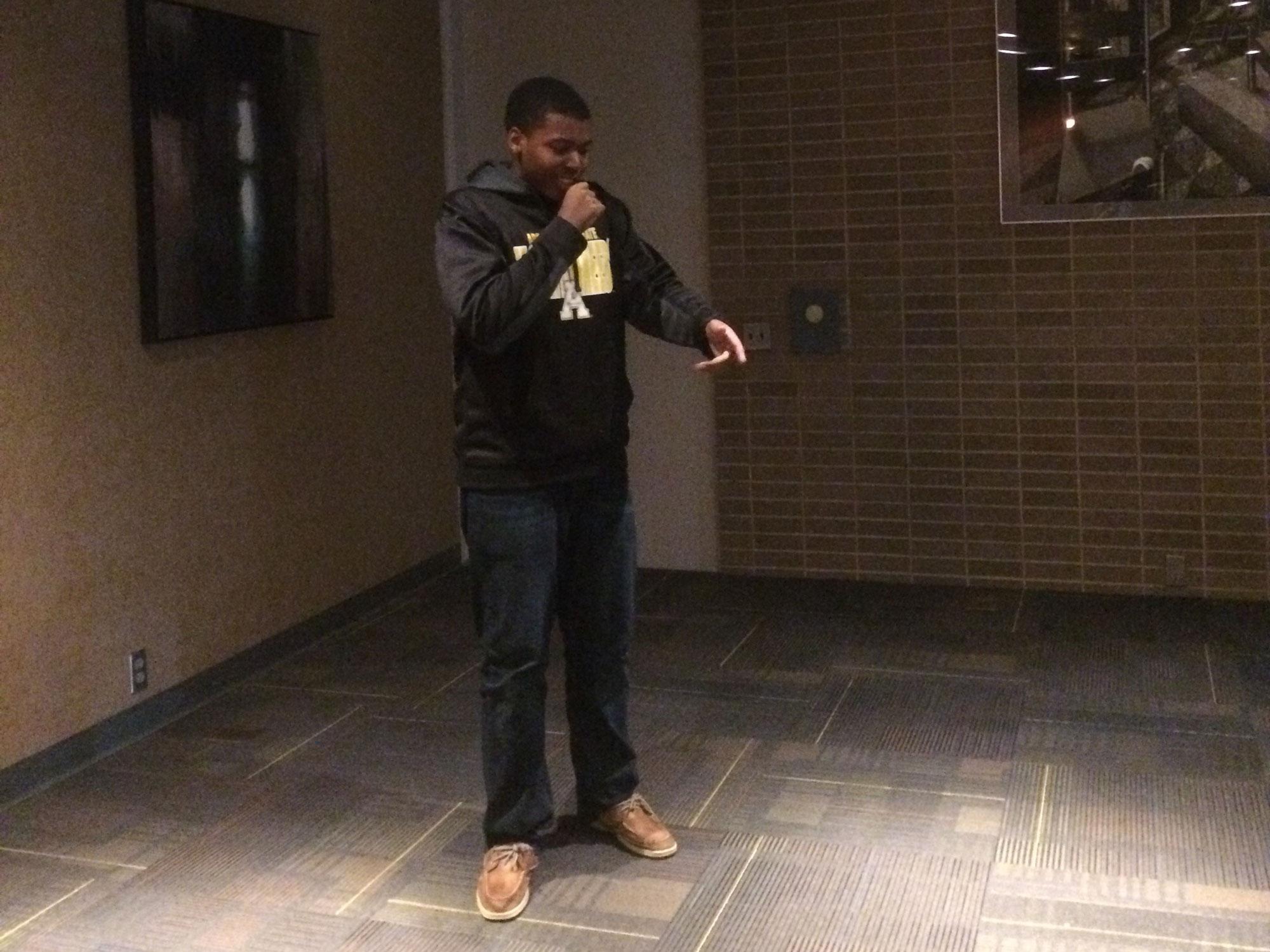 Phillip Martin the second rapping on stage in the White Water Lounge.

Phillip Martin is a local gospel rapper who uses his poetic art form to convey his message of hope at Appalachian State University.

“My message is to promote God and to get to non-believers who don’t believe in him,” Martin said.  “I want people to realize that he is real.”

Martin is a freshman at Appalachian State University majoring in forensic science. He was born in Winston-Salem, but was raised in Lexington, North Carolina.

“I grew up in a Christian home and my strong faith in God makes me want to share his goodness,” Martin said.

Martin’s father is the minister of the Mt. Carmel Missionary Baptist, Martin’s church home. Gospel’s influence on him came at a young age when he first saw a gospel rapper perform at his church. He said it drove him to pursue gospel rapping as a hobby and then eventually it became a means of ministry for God’s message. He used his poetic abilities to not only express himself, but also to spread his message of God’s love for all.

Martin writes his own lyrics and said the most difficult part is finding the proper motivation.

“It’s hard for a gospel writer to write because it all has to be driven by the spirit,” Martin said. “I think about what’s happening today and use my rhymes to make a positive statement about that.”

Martin also creates his own beats, something he said he wishes he knew how to do better. He feels that eventually after his load of schoolwork calms down he can take classes at Appalachian State that will further his beat-making abilities.

“I want to take classes here at App State to get better at making the music behind my bars,” Martin said. “I started buying studio equipment a year ago, but I’m still growing to make my sound better for the lord.”

Martin said his rap style is very southern and one of his favorite southern rapper and influence is Lucrae, a fellow gospel rapper.

“I love Lucrae, he’s one of my favorite artists,” Martin said. “I would love to see him live. I compare myself to Lucrae.”

Martin’s love for hip-hop and his drive to rap didn’t come from a happy beginning, it came after a terrible accident including his family and a drunken driver. When Martin was just three years old, he was struck head-on while driving with his parents. The driver of the car was drunk and the accident traumatized Martin.

“I was scared and crying. My mother was hurt and screaming pain,” he said. “With me being a momma’s boy, it affected my mental state.”

Martin’s father rescued them from the wreckage and helped them get to safety.

“This is what made me become a gospel rapper because after the accident I developed a stuttering problem,” he said. “It would affect my pronunciation of words and how I read things.”

Due to the incident, Martin was left with an inability to speak properly which affected his work and home life.

“It would leave me frustrated and angry all the time because people would pick on me,” he said. “My second grade teacher would see me as somebody to ask questions to because she knew I would stutter. She said I would never make it, she said if I did make it, I would have no social skills or probably be working at McDonald’s the rest of my life.”

Martin’s stuttering was the direct impact of the accident and found that speaking correctly was nearly impossible. Prior to accident, however he still rapped, but not for the Lord. He always felt something was missing and after the accident his ability to rap dropped because of the stutter.

One night, Martin said, through his faith in God he was miraculously cured.

“I had a dream where God brought back the image of the car wreck,” Martin said. “It felt scary, but there was a reason for that. He said I needed to change, to get better, and to better the kingdom of the Lord.”

Martin said he began to use gospel rap as a means of communication and a way to express the anger he felt concerning the accident. Through his dedication to his craft and faith in God, Martin was able to overcome his stutter and use his gospel rapping abilities to reach others.

His abilities are still growing today and every day he works at it, he said he becomes stronger and stronger.

“In the New Testament, it says use your gifts for the lord, use them and work hard at them and grow,” he said. “If you have a gift from the lord and you don’t use it properly you will not grow.”

Now Martin’s next challenge is to figure out a way to balance school, work and rapping.

“I see college first, then music,” Martin said. “Yeah, I would want to go in the booth and get started on dropping bars, but education, based on this time of day, is important for survival. If you don’t have it, the system will see you as a statistic. I would love to rap as a career, but I see education as far more important.”

For now, he is studying and working hard on getting his degree, but he never forgets the impact rapping has on the people around him. He feels that God blessed him with this gift to reach others.

“I believe this is a ministry,” Martin said. “I showed my friends in high school that I was a gospel rapper and some said they didn’t care. One guy I ministered to was going to drop out of high school because he was over 18 and he was a gangbanger. And I talked to him and rapped to him. He encouraged me to rap for God and I encouraged him to finish school. He graduated and his faith in God pushed him to do so.”

Martin said he feels that anyone can become an artist, even a gospel rapper, they just have to find the proper motivation.

Martin said that the feedback he gets from his music is mixed and that sometimes there are those who don’t feel the same way he does about God. He said that does not discourage him and he’ll keep rapping if it means more souls being saved.

Some students who have heard Martin rap say that it’s one of the best things they’ve heard in a long time.

“When I heard Philip rap I was shocked, I don’t listen to gospel, but I’d listen to this kid,” junior environmental science major Jack Hertzfeld said.

Martin said he gets reactions like that often when he tells people he’s a gospel rapper. Some love it, others don’t, but they like the way he sounds.

“I am an unashamed Christian artist and as a Christian artist you get both sides, the influential and the opposition,” he said. “It goes both ways, you just have to know how to approach it. People are going to have their opinions at the end of the day. People are going to say this and that as long as you do it for God no one else’s approval matters.”

Friends of Martin say that everyone should listen to his lyrics and hear Martin’s message.

“Support my bro, his stuff is good and it will change your life,” junior exercise science major and friend of Martin Amin Aminu, said.

Martin’s music can be found on SoundCloud as Phillip Martin II and will be available on Spotify soon.