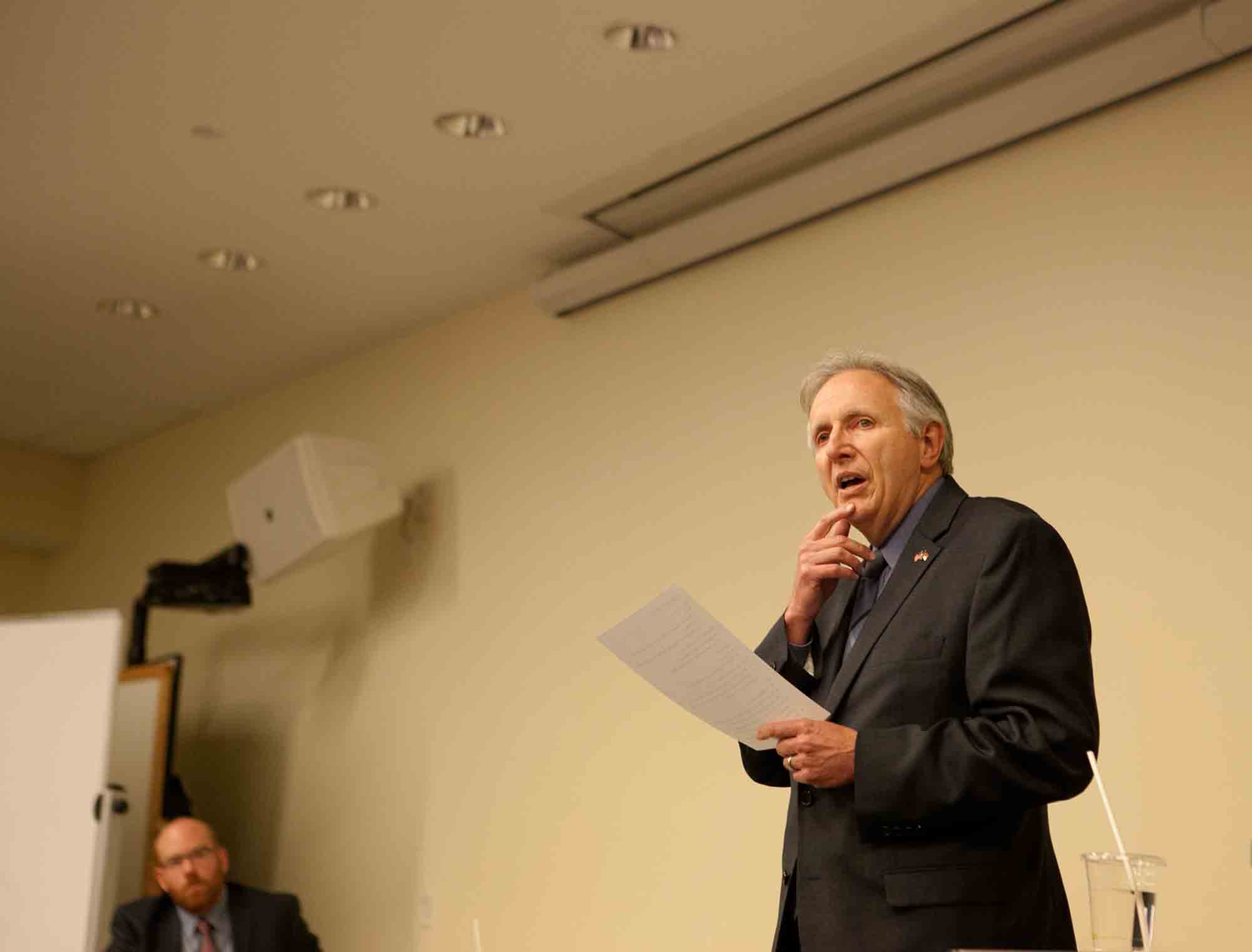 Candidate Ray Russell gives his opening statement Tuesday evening as he gears up to debate his opponent for North Carolina district 93, Jonathan Jordan.

A man with a past full of different interests and careers, Ray Russell makes his way toward the next hopeful chapter of his life by running as a Democrat for the House of Representatives 93rd District seat.

“It will give me an opportunity to use the gift that I’ve been given and to give back to the community in ways that I never would have been able to otherwise,” Russell said. “That’s really the fundamentals. I’ve always believed ‘to whom much is given, much is required’ and I’ve been given much.”

“I’m a computer scientist. Computer scientists are problem solvers,” Russell said. “We look at problems and figure out how to take existing resources to solve those problems. That’s what I’ve done for over 30 years. I think it’s a great skill set to bring to the political table, specifically with economic development.”

Russell has worked as a computer science professor at App State since 1991. Before teaching at App State, he taught at Virginia Commonwealth and Freed-Hardeman universities. However, Russell is more commonly known as the founder and president of the small business Raysweather.com.

Ray’s Weather covers the weather in the Southern Appalachian region. In 2016, the Boone Chamber of Commerce recognized it as the “Business of the Year,” according to Russell’s website.

In addition to being a professor and weatherman, Russell also said he has been a minister for churches in North Carolina, Mississippi, Georgia and Tennessee.

“It was clear to me that we needed candidates running for office that were connected in communities, that had a passion for the communities and we needed to change the very tone of elections and of being in office,” Russell said.

Russell said he saw problems he wanted to fix and knew his background from Ray’s Weather could lead him to winning the 93rd District seat.

When identifying problems Russell has seen and the solutions he would like to implement, he created the values for his campaign, which is named Ray For NC.

The four main problems and values he hopes to tackle if elected are in education, healthcare, environmental issues and addressing economic development in rural districts.

Russell said he finds healthcare to be a huge issue, particularly Medicaid expansion. Russell said that he finds the failure to expand Medicaid to be the biggest mistake North Carolina has made in the last five years. He said that people should develop a better understanding of the impact it is having on the state and its people.

Russell’s wife, Rhonda, has served as an early-childhood educator and is a senior lecturer in the Department of Family and Child Studies.

“My wife is passionate about early childhood so she rubs off on me a lot,” Russell said. “Early childhood education and issues related to it is a special skill-set that maybe I don’t have specifically, but it does live with me in the house.”