Review: Cast of “The Laramie Project” offers humanity in wake of tragedy 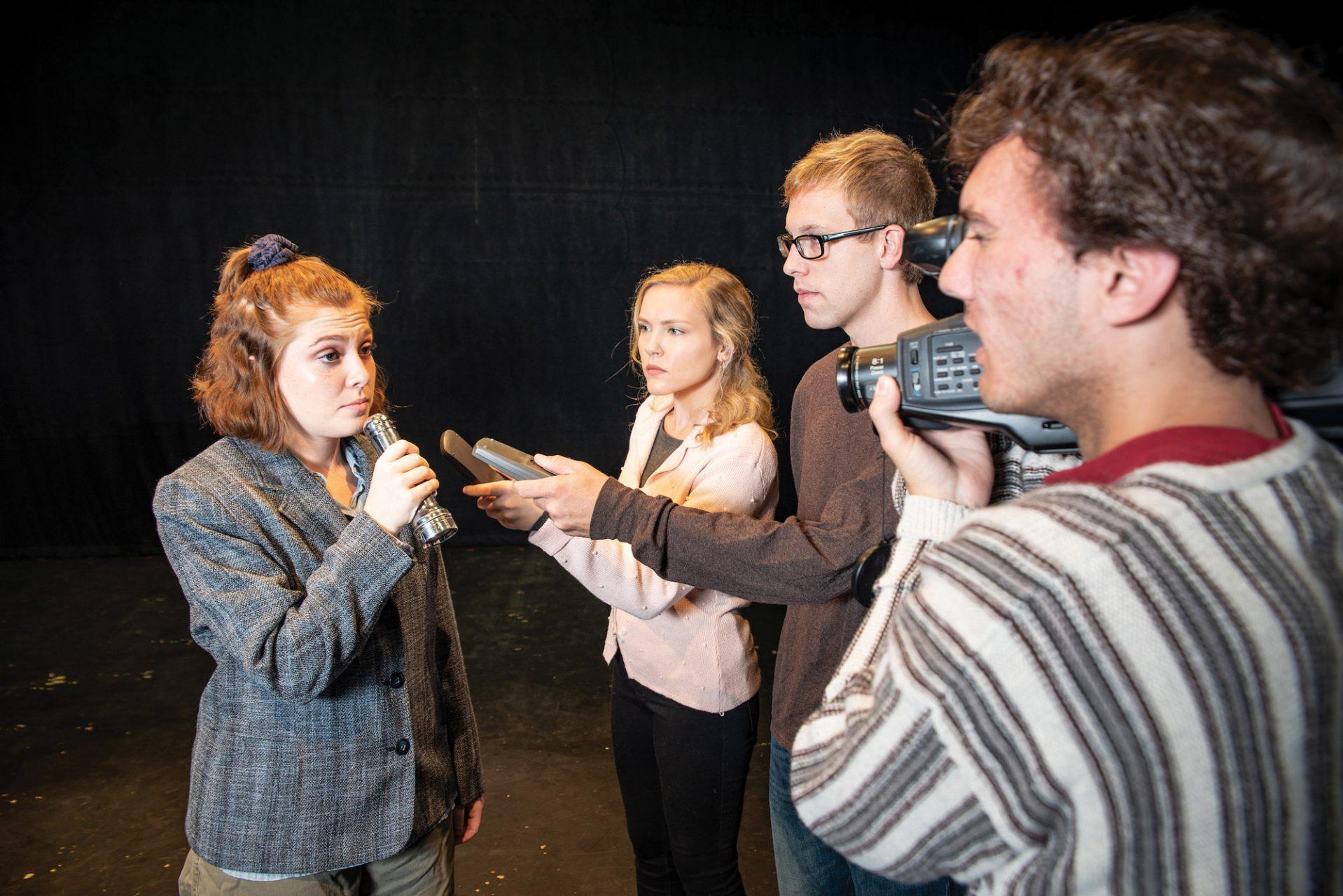 Media representatives from around the world descended upon Laramie, Wyoming in 1986 to cover the Matthew Shepard hate crime and the subsequent trial. Pictured here are Theatre and Dance students involved in the production of the play, which coincides with the 20th anniversary of the actual event. From left to right, they are Zoe Dean, Virginia Riggsbee, Forrest Barker, and Devon Bucey.

When the voice of the stage manager rings out “Five minutes until places,” over the intercom, it may sound distinctly like a technical difficulty. In “The Laramie Project,” however, every action functions to remind the audience that they are participating in a constructed performance.

“The Laramie Project” uses “moment work,” a form of acting that rejects realism, to press audiences through Matthew Shepard’s beating and death in Laramie, Wyoming. Audiences may engage with the play emotionally, but the actors take great care to ensure audiences don’t forget they are watching a constructed version of the events.

Playwright Moises Kaufman drew inspiration from Bertolt Brecht, according to the dramaturgical notes in the play’s program. Brecht was a playwright and director who termed the “alienation effect,” which keeps the audience separated from the events on stage.

One defining aspect of “The Laramie Project” and moment work is the transition from character to character. Each actor portrays upwards of four roles throughout the play, so many costume changes and recharacterization happen on stage. The audience knows that the characters are not static and that the actors can change characters at any moment.

The beauty of this performance, however, is that even when audience members are aware of their alienation from the story of Laramie, they cannot help but cling to each character like life-support as the play moves forward. Even when characters hold troubling beliefs, the constant reminder of the construction of the theater allows the audience to think critically instead of being driven by outrage.

The most compelling relationship in the play is between Reggie Fluty (Zoe Dean, junior theatre arts major) and Marge Murray (Mackenzie Smith, senior theatre arts major), whose lives are intertwined with Matthew’s story when Fluty, a police officer, responds to the scene of Matthew’s beating. Fluty and Murray are human, driven by anger, fear and love. Dean and Smith fearlessly bring them to life and engage the audience without testing the appreciation for the characters.

Parker Stone, senior theatre arts major, also delivers a stunning performance of Dennis Shepard’s tearful address to the court about Aaron McKinney’s (Dalton Forster, sophomore theatre arts major) death sentence. The scene is stark, if not vivid, and allows the audience to focus on Stone’s performance without distraction from other cast members.

“The Laramie Project” has the opportunity to leave audiences miserable and crestfallen, but the student actors and director Teresa Lee, professor of theatre arts, don’t allow viewers to linger in the morbidity of the show. Actors give gravity to the unsettling, but don’t hesitate to create space with comedic relief. No moment in the show is treated as less significant than another — each one is critical to the story of the town.

Audiences will have a much easier time celebrating “The Laramie Project” if they accept what the cast and crew has already figured out. The play is not, in fact, the story of Matthew Shepard. It’s not about the past, for the ideas presented haven’t gone away. This play presents the humanity of small-town America and urges audiences to consider their role in hate, healing and moving forward.

In the play, Father Roger Schmit (Shane Buchheit, junior theatre arts major), comes to members of the Tectonic Theatre Project and tells them, “I will trust that if you write a play of this, that you say it right. You need to do your best to say it correct.” It is clear that the cast and crew of “The Laramie Project” took Schmit’s words to heart, and they said it right.

Featured Photo caption: Media representatives from around the world descended upon Laramie, Wyoming in 1986 to cover the Matthew Shepard hate crime and the subsequent trial. Pictured here are Theatre and Dance students involved in the production of the play, which coincides with the 20th anniversary of the actual event. From left to right, they are Zoe Dean, Virginia Riggsbee, Forrest Barker, and Devon Bucey.