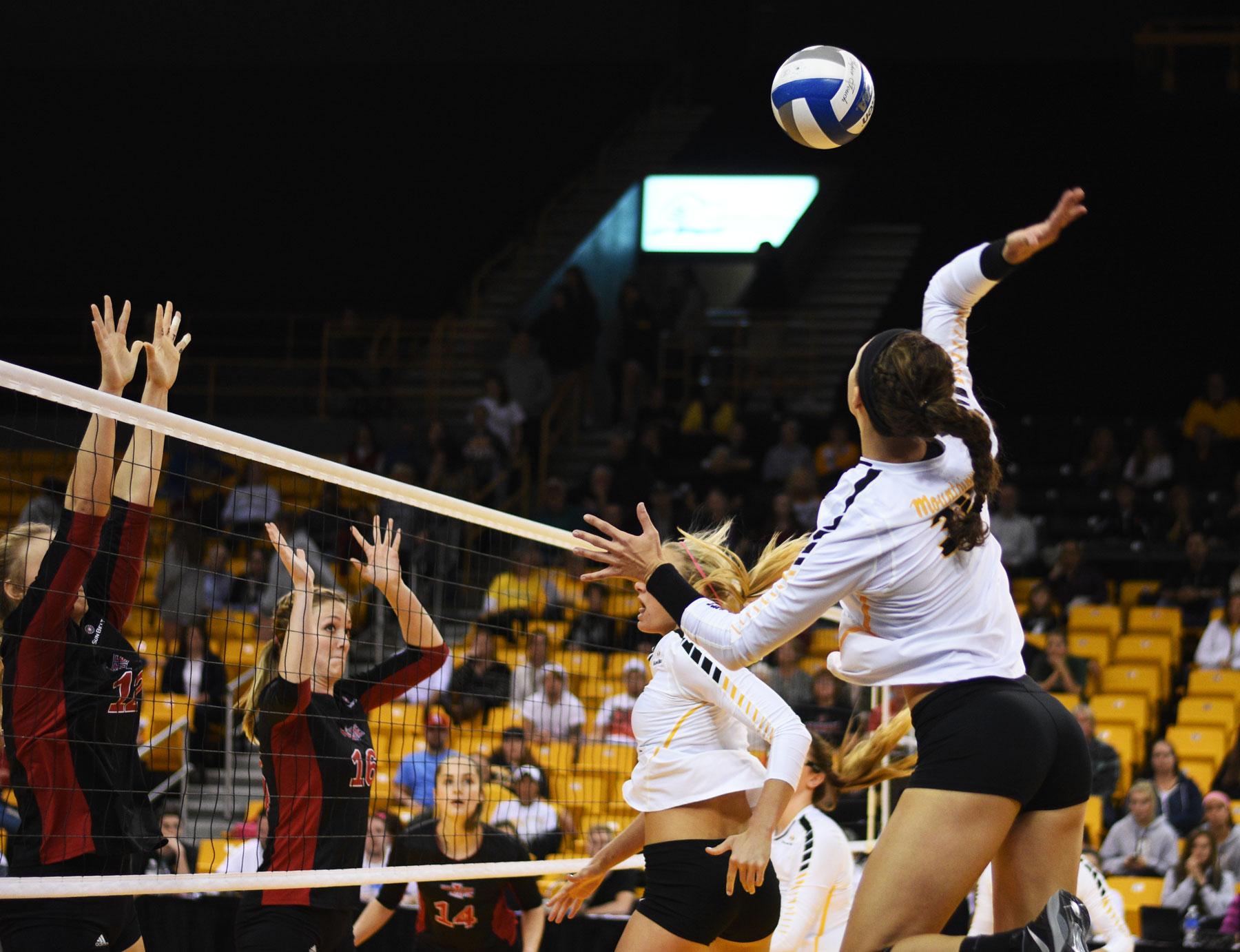 The App State volleyball team (20-5, 13-1 Sun Belt) was defeated by the Arkansas State Red Wolves (22-1, 13-0 Sun Belt) 3-1 on Sunday to hand the Mountaineers their first Sun Belt loss of the season, snapping a 13-game winning streak in the conference.

The atmosphere during the match was electrifying as the members of App nation appeared in full force to support the team. With every point scored and every huge save, the Holmes Center was rocked with raucous screaming and clapping as fans attempted to will the Mountaineers to victory in what was the biggest game of the year in the Sun Belt so far.

Both teams were undefeated in conference play when the day began. The first set opened up with a vicious back and forth, as neither team went up by more than a few points for the first half of the set. Senior outside hitters Emily Corrigan and Jess Keller had three kills and four kills respectively, and senior setter Paige Brown put up 11 assists, complimented by nine impressive digs. Senior libero Meghan Mahoney and sophomore defensive specialist Olivia Loeffler also had five digs apiece in the set. The Red Wolves would eventually put some separation in the scoring however, winning the first set 25-18.

The second set was total domination by the Mountaineers. Jess Keller added seven kills to her total of 18 and Emily Corrigan had five. Junior defensive specialist Olivia Reed made her match debut in the second set and put up seven digs. The momentum shifted completely into the control of the Mountaineers, who opened up two, five-point streaks during the set, eventually winning by 10, 25-15.

After this, however, Arkansas State took the match into their own hands, winning the next two sets 25-23 and 25-17 and claiming the game.

The Mountaineers fought valiantly, especially in the third set, making comeback after comeback to bring the set back to within a point at Arkansas State’s set point. The team combined for 12 kills, 12 assists, 18 digs and 14 points, but could not pull out a set victory, giving the Red Wolves a huge advantage, needing only one more set to take the game.

The fourth set was similar to the first, staying even for the first half, until Arkansas State pulled away with four-point and five-point streaks to win the set and the match.

After the game, head coach Matt Ginipro tacked the loss up to sloppy play on the court.

App State will get another chance at the No. 21 Red Wolves on Thursday, when they travel to Jonesboro to face them again in their second to last regular season match. The game will decide who takes the number one seed in the Sun Belt Tournament and who will be demoted to second, as the Mountaineers attempt to spoil Arkansas State’s undefeated record.