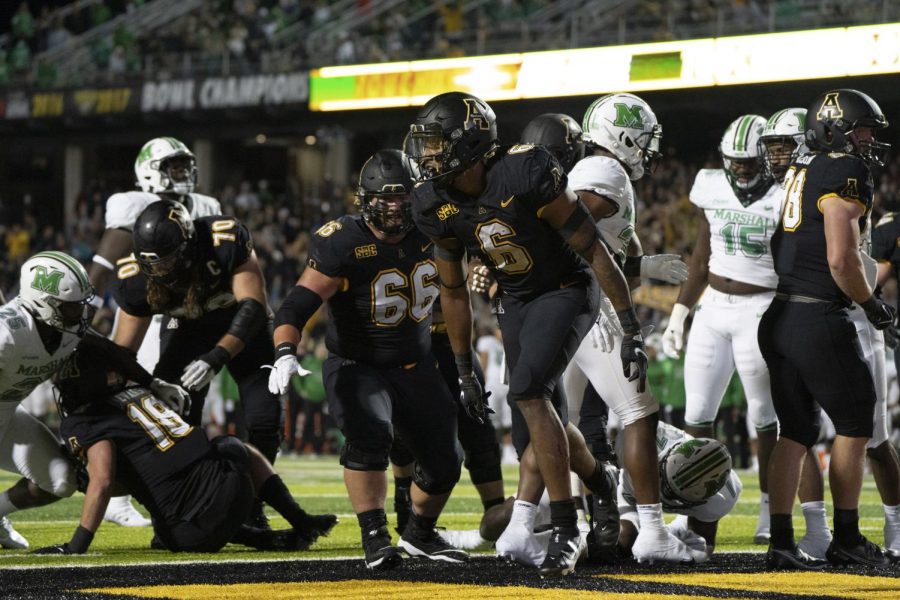 Junior running back Cam Peoples celebrates a touchdown in a 31-30 win over the Thundering Herd. The Mountaineers will soon compete with Marshall every season.

After two schools joined the conference in three days, the Sun Belt has added another to the roster, one very familiar to App State and its fans.

Marshall University accepted an invitation to the Sun Belt Conference Oct. 29 and are expected to join the East Division. The move extends the Sun Belt’s foothold into West Virginia and pushes the conference to 13 football programs.

Clark was a part of the former rivalry, playing for the Mountaineers from 1994-98.

Over the last two seasons, App State and Marshall have competed in two thrilling matchups, including a 17-7 Thundering Herd win and a 31-30 comeback victory for the Mountaineers. The games called back to the 1990s in the Southern Conference rivalry when the two competed every year, working for a spot in the Division I-AA National Championship.

During the SoCon era, the Thundering Herd won two national championships, with one including a 24-10 win over the Mountaineers in the semifinals. Marshall joined Conference USA in 2005 and has been consistent since.

Marshall was a contender in C-USA and has been trending up in recent seasons, but the sudden poaching of seven other programs has led them to join the Sun Belt and reignite its rivalry with App State.

The move has no set timeline, but the other new members, Old Dominion and Southern Miss, will join the conference by July 1, 2023. The Sun Belt now has 15 members with James Madison set to make it 16 as early as next week.