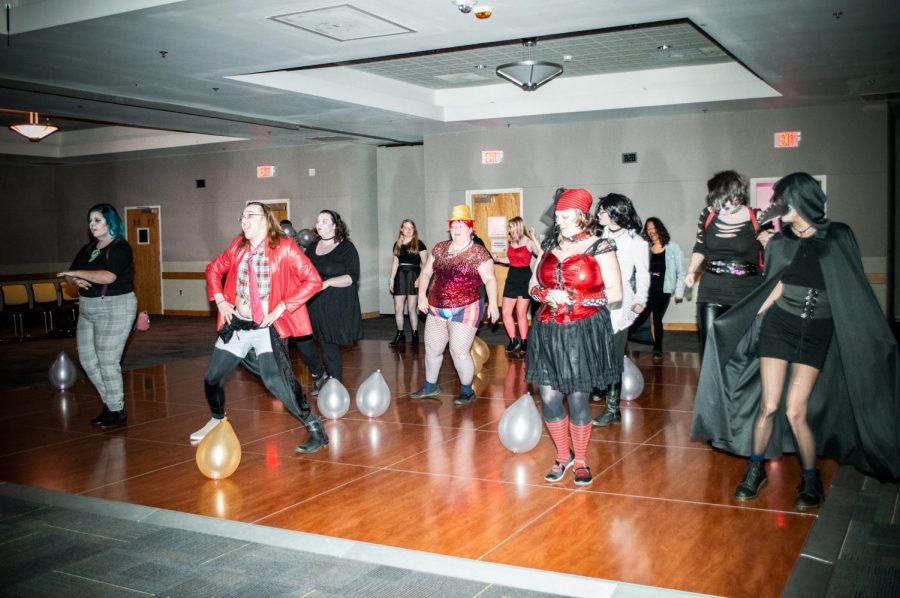 This Halloween, freshman Wynter Clemmons decided to take a gruesome route with her Alice costume from “Alice in Wonderland.” She paired her light blue dress and white apron with a bloody slash mark she applied to her neck with makeup.

The interior design major said she has experimented with cosplay makeup for 6 years, and her gore makeup took 6 hours to complete for this year’s Rocky Horror Halloween Ball.

“We haven’t done it before, and with Halloween, there are only so many that look like repeat ones. So we were like, ‘This one is a festive one that we haven’t done yet,’” Smith said.

“I really enjoy the horror aspect to (my costume),” Clemmons said. “I did the cut in the neck to (show an) ‘Off with her head’ kind of thing.”

The ball also had a dance competition, where attendees watched others take over the dance floor in costume.

Senior studio art major Anna Kirk participated in the costume and dance competitions dressed up as Beetlejuice. In previous years, Kirk said she was swamped with school work making it impossible to participate in Halloween events. This year Kirk was able to embrace the spooky season and attend the Rocky Horror Halloween Ball with friends.

“Last year I didn’t get to do any costume for Halloween because of schoolwork so this year I just chose something that I already had mostly together,” said Kirk.