Runnin’ Bulldogs run out of the stadium 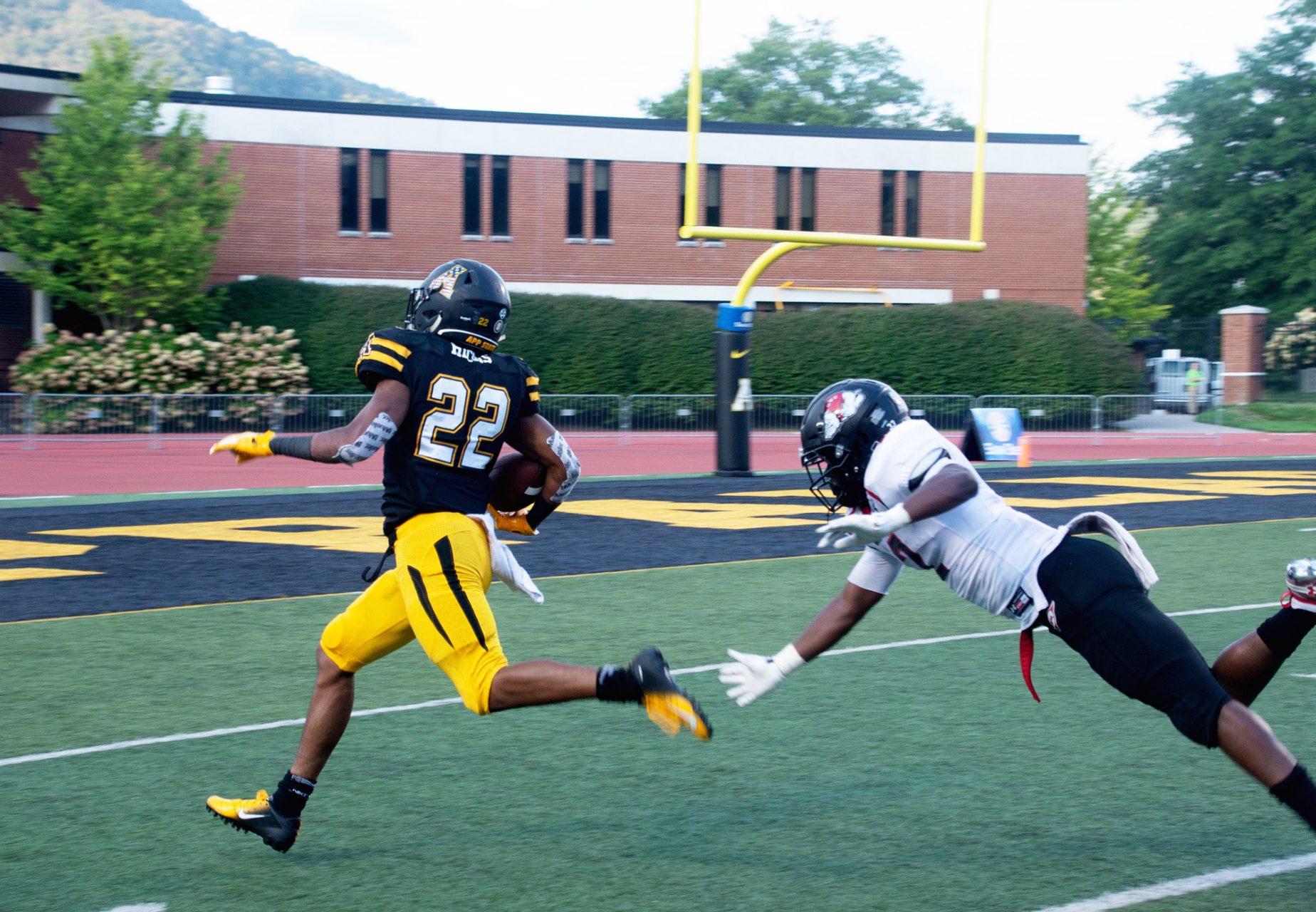 On a day that tied for App State’s latest home opening football game since 1972, the Mountaineers dominated the Gardner-Webb Runnin’ Bulldogs, finishing with a final score of 72-7.

Things started off quickly with redshirt sophomore quarterback Zac Thomas completing his first pass attempt to graduate transfer receiver Dominique Heath for 64 yards and a touchdown. The defense then forced a three-and-out from Gardner-Webb, and redshirt freshman cornerback Steven Jones blocked and recovered their punt in the end zone, giving the Mountaineers a 14-0 lead less than three minutes into the game, which they never gave up.

After the game, head coach Scott Satterfield said that he felt like the starters came out ready to play and perform from the get go, but was even happier with the play from the second and third stringers who got into the game in the second half.

“I’m even more proud of the guys that finished the game. We cleared our bench and played everybody today that was down in uniform,” Satterfield said. “The great thing is there wasn’t sloppy play when they got in. Sometimes you get guys that haven’t played a whole lot, they get into the game and you get some sloppy play here and there. But those guys went in there prepared and ready to play and did a great job.”

The game turned ugly quickly for the Runnin’ Bulldogs. App State could not be stopped on either side of the ball and they poured it on, leading 28-7 at the end of the first quarter and 52-7 at halftime. The Bulldogs could not find any rhythm, posting -7 rushing yards at the half and only 89 total yards to App State’s 401. The second half didn’t go much better for them, finishing with only 152 offensive yards to App State’s 692.

Thomas finished his day going 11-15 in passing attempts for 185 yards and a touchdown and also rushed for 8 yards and a touchdown. Seven different quarterbacks saw action for App State on the day, with backups redshirt freshman Peyton Derrick, redshirt senior Zeb Speir and redshirt sophomore Jacob Huesman all recording completions. Redshirt freshmen Tanner Wilson and Jackson Gibbs and freshman Stephon Brown all made their debuts for the Mountaineers but did not attempt a pass.

Redshirt senior running back Jalin Moore had only eight carries on the day but picked up 119 yards and two touchdowns, including a 81-yard rush for a score, the longest run of his career. Five other running backs made appearances for App State, including redshirt freshman D’Andre Hicks, who picked up 150 yards on 11 carries with a 73-yard touchdown run in the fourth quarter.

“It’s crazy when you have that much talent and everybody can go,” Moore said. “I deeply believe that anybody in that room can be a starter and contribute to this team. That’s just our goal, to have the next man up mentality and everybody was ready. Whoever’s number was called came out and produced.”

Special teams also had another outstanding week, blocking two punts on the day, including one for a score. Junior cornerback Clifton Duck also had a 62-yard punt return for a touchdown in the second quarter, making this the third straight game that the Mountaineers have returned a punt or kickoff for a touchdown and the second consecutive game with a punt return, the last coming from sophomore receiver Thomas Hennigan against Charlotte.

“(Hennigan) being a receiver and me being a corner, that’s already our battle,” Duck said. “But he also told me, ‘Look, I got one, now you have to get one.’ And he had a key block, on the kicker I want to say, for me. I feel like this year, our special teams is all playing together, all playing for one another…the way everybody gets down the field and the way we compete, I feel like that’s what makes us who we are this year.”

With the cancellation of the Southern Miss game, Gardner-Webb marks the end of App State’s non-conference schedule. They will resume play on Saturday for Homecoming against South Alabama and their first Sun Belt game of the season.

Featured photo caption: Redshirt freshman running back D’Andre Hicks breaks free for a 73-yard touchdown against Garnder-Webb. He rushed for 150 yards on 11 carries for the game.