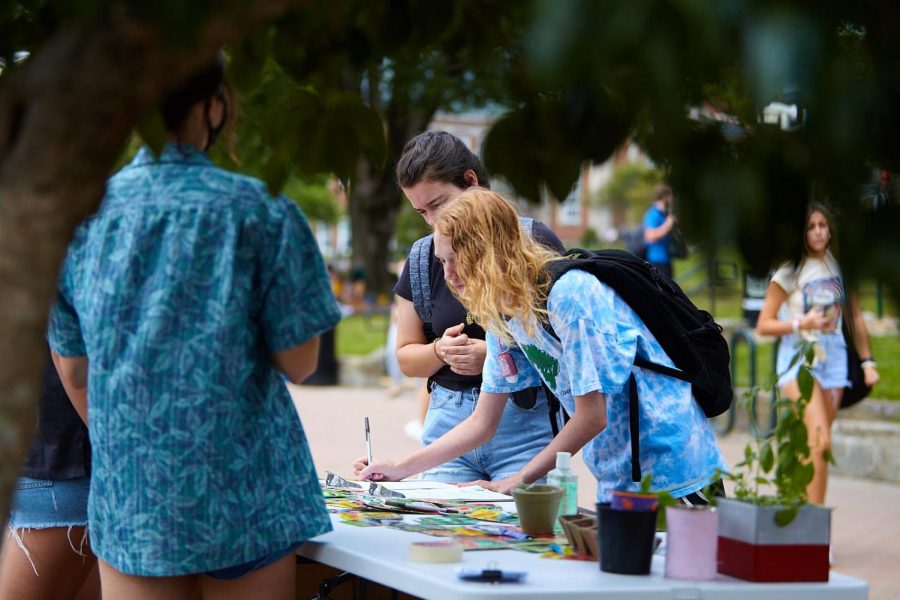 ClimACT set up a table Monday on Sanford Mall. As students walked by their table they could join the club, pick up free seed or sign a petition.

One student climate activist group is bringing plants, popsicles and painting to campus with their upcoming Greek life-inspired rush week.

“We think that there are really exciting and necessary things that can be done for the community to help people while protecting ourselves from the future impacts of climate change,” Weiss said.

After COVID-19 made it difficult for many people to commit to the group, members decided to host a “rush week” from Aug. 23-27, with different events planned each day to recruit new members.

Events include a plant day, clothing swap, street art and banner making. The full list of events can be found on ClimACT’s Instagram page.

The group decided on the idea of a “rush week” to show freshmen that getting involved in Greek life isn’t the only way to find friends and a community at school and make strong bonds, said Hannah Cullen, co-coordinator for the ClimACT communication team.

With negative climate news over the summer and the recent IPCC report, Cullen hopes people are coming into school more aware and passionate about climate change.

“We really want to create this inviting atmosphere to join because we think that everyone has their own place in the climate movement,” Cullen said.

Since 1990, the United Nations body, the Intergovernmental Panel on Climate Change, has created six reports assessing climate change. The most recent report confirmed that human activity has warmed the atmosphere, ocean and land, at an unprecedented rate in the last 2,000 years.

“Rush for Earth” is ClimACT’s first event of the semester, following a summer that included attending a board of trustees meeting June 18.

Weiss said the BOT are the primary decision makers at App State and have the power to enact all of ClimACT’s demands to the university. These demands include committing to purchasing 100% renewable energy by 2022, investing money into sustainable infrastructure and creating a Climate Action Committee on the BOT.

After emailing the BOT to set up a meeting with no response, the group felt attending one of their meetings would be a good pathway to have their voices heard.

“That was a really good experience for all of us,” said Sarah Sandreuter, junior sustainable development major. “It definitely made us excited to keep doing our campaign for the board of trustees because the environment and the language that we got from that was intense.”

Sandreuter said ClimACT hopes to show the university the group will get progressively more intense by increasing the numbers and frequency of their demonstrations if they continue to receive no response.

Members of ClimACT plan on attending the next board of trustees meeting Sept. 24, on International Climate Strike Day.

“The work that ClimACT does is important because it brings students into a grassroots organization and shows that you can have power just being a student,” Sandreuter said. “Doing something about it can help people who feel overwhelmed that they can’t do anything at all, and it’s just a place to find solace and work together to fight for something that matters.”