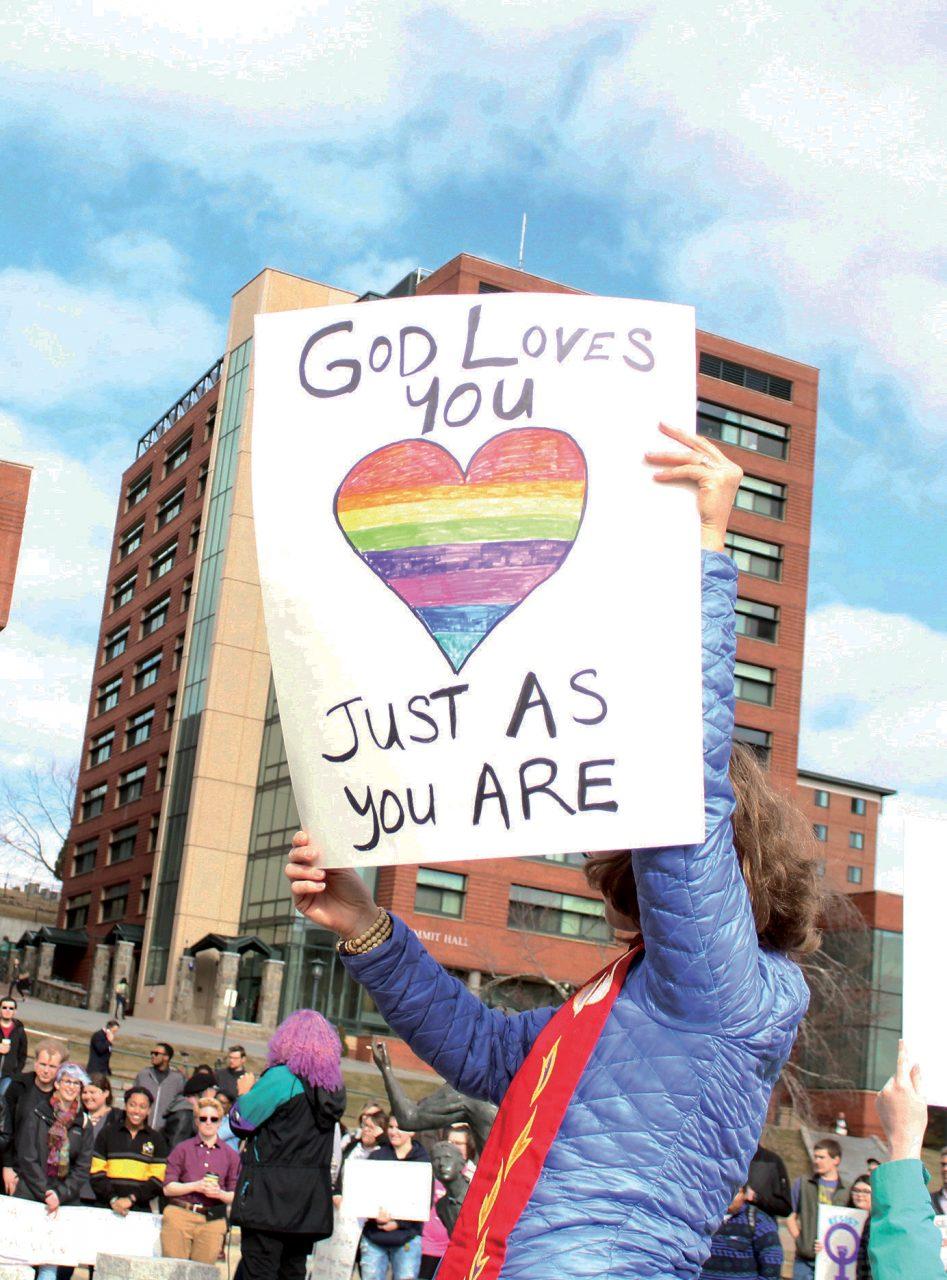 A sign from a protest against Michael Brown's visit to App State last semester. Protestors believed that his relgious rhetoric disguised a discriminatory message.

Preachers pass out pamphlets on Sanford Mall, spreading the word of God and reciting the gospel. As students gather around, an act of free speech turns into hostile shouting when beliefs clash.

Sanford Mall is known for its wide-open space and for students relaxing between classes. Evangelical preachers gather on the mall in small groups to preach, but often face backlash from the student body. App State police observe the scene to ensure safety for everyone while taking complaints from students.

“As a university, we encourage the sharing of different ideas and beliefs,” Andy Stephenson, director of public safety and chief of police,  said. “It is our job to make sure people are safe, seen and heard.”

“Preachers have a right to be seen and heard just like everyone else,” Stephenson said. “Preachers make general statements toward the public about their belief and what God has dictated they should say.”

There is no violation of free speech until harassment, obscenity or threats toward an individual or group have taken place, Stephenson said.

“Fighting words and directly insulting an individual are not protected under the First Amendment,” Stephenson said. “Any language that would provoke a violent reaction can be classified as fighting words or threats.”

Legally, harassment has only taken place when an individual or group has been repeatedly targeted and threatened.

Stephenson said many students have reported acts of hate speech by the preachers on the mall. Although people may not agree with or like what the preachers have to say, their right is protected under the First Amendment.

“Hate speech is protected speech, but threats are not,” Stephenson said. “For example, we would have to treat a white supremacy group just like any other group.”

Daniel Smith, a North Carolina volunteer preacher with a campus ministry group from California, said people should be allowed to speak their mind no matter where they are, but said some people take it too far.

“I don’t think free speech should interrupt class time,” Smith said. “But, free speech is protected under the Constitution.”

Smith said many campuses, such as UNC, have free speech zones, but ultimately public universities should allow free speech anywhere. Smith said he knows people pay to come to App State, but students should still be exposed to different cultures in the process.

Smith’s group’s only mission is to spread the word of God with no intention of harming or harassing anyone in the process, according to the campus ministry group.

Stephenson said police make sure events are not disrupted. Issues only arise when there are counter-protesters with opposing viewpoints who want to silence the other group.

“Our mission as a police department is to provide security and ensure people can voice their opinions, despite the content of the speech,” Stephenson said.