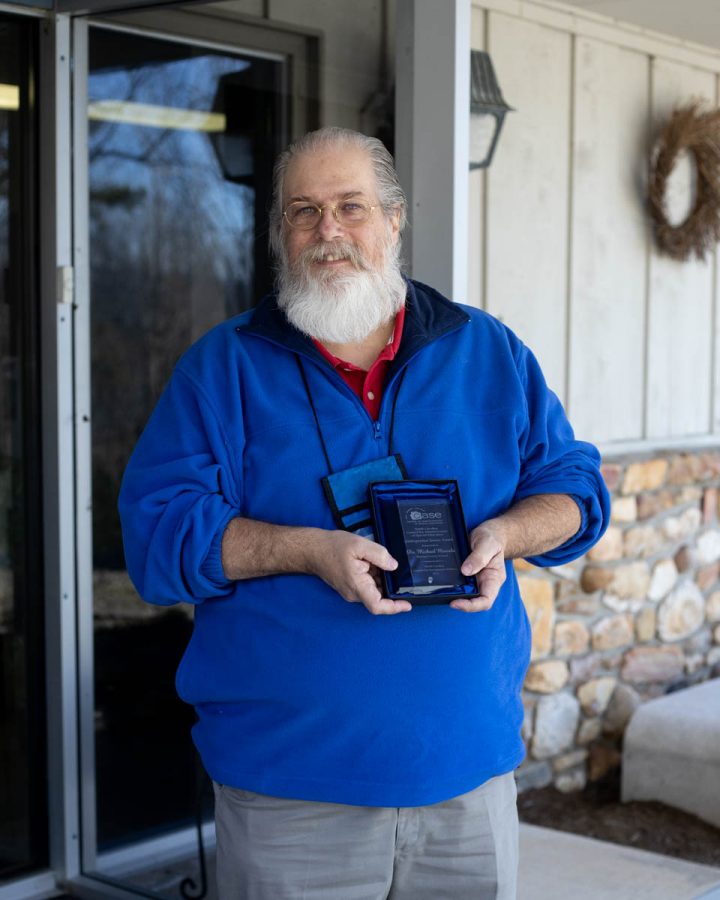 Mike Marcela, photographed at Watauga County Schools central office, has worked as program director for nine years. His central passion, Marcela said, is providing the best support and education for exceptional children so they can succeed.

A program director for Watauga County Schools, who students know as “Dr. Marcela Santa Claus,” received the distinguished service award for his work in the exceptional children department.

Marcela oversees roughly 900 students and 80 staff members in the exceptional children program, spanning across eight K-8 schools and one high school in Watauga County. Marcela has served as program director since 2012 but has worked in special education his whole career.

“I came to special ed to be involved with working closer with children. Children that were in the most need really appealed to me a lot,” said Marcela.

Marcela, former president of NC CASE, said his efforts with the council throughout his career is something he’s “very proud of” but is most proud of the work he does for kids in schools.

CASE is a nationwide advocacy group that works to enact policies for a more quality education for children.

Most recently, Marcela and NC CASE worked to broaden the services that schools can bill for through Medicaid, such as transportation, nursing, counseling, evaluations and personal care assistant support.

Whether it’s writing to legislators or working with the North Carolina Department of Public Instruction, Marcela said NC CASE works behind the scenes to ensure students and teachers have everything they need.

“To get that award from folks that you respect and you’ve worked alongside with and who are your mentors – it means a lot,”Marcela said.

Before working as program director in Watauga County, Marcela taught special education for 10 years and served as exceptional children director in Wilkes County and as an accountability specialist for Charlotte-Mecklenburg Schools.

“He’s just been amazing, not only in this county but in so many different areas,” said Jana Dobbins, Exceptional Children program specialist and transition coordinator.

The most rewarding aspect of Marcela’s work is watching the students grow and progress throughout the years, he said.

“Some kids started in pre-K when I started and they’re pushing high school age now,” said Marcela. “I get to hear from staff all the time that ‘this student couldn’t do this’ but now, a few months later, they’re doing things that we never expected.”

For the last several years during the holiday season, Marcela and his wife transform into Santa Claus and Mrs. Claus at schools, The Blowing Rock attraction, Tweetsie Railroad and community events.

Marcela said he takes this task seriously and becomes a “real bearded Santa” by only shaving once in January and letting his beard grow out the rest of the year.

Enjoying the administrative duties as program director, Marcela said his role is to provide help and support to teachers and students. He said he will step into the spotlight if somebody needs to “take a hit,” but otherwise he will stand back and let teachers do as they need.

“I do have a very firm belief that what a teacher does in the classroom is always going to be infinitely more important than anything I ever do in a day,” Marcela said.

The exceptional children program has been in person four days a week throughout the 2020-21 academic year and Dobbins said it has gone smoothly. Marcela said he consistently met with staff in preparation for the school year.

“I love working up here. We have got an unbelievable teaching and therapist staff and it’s just a great place to be,” Marcela said.