Senator of two years and ASG delegate runs for VP 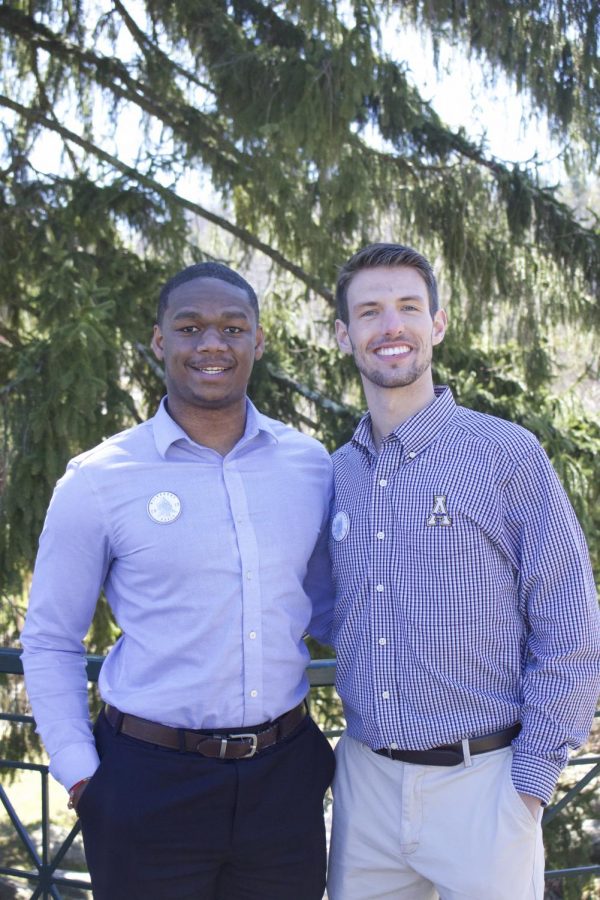 DeJon Milbourne, left, and Michael Davis, right, are running unopposed in the SGA Presidential Election. Davis is currently the ASG delegate and has served as a SGA senator for two years. Photo Courtesy of Michael Davis.

Michael Davis had no idea what Student Body President DeJon Milbourne wanted when he called him in for a meeting.

Already dressed in pajamas after a long day of classes, Davis received two phone calls from a weird number.

“I get a GroupMe message from DeJon that’s like, ‘Pick up the phone,’” Davis said. “It was Savannah Fonvielle (chief of staff) and she was like, ‘Come down to 185 in App Hall.”

Davis went down to the room still dressed in his pajamas.

“They’re all looking around at each other and DeJon’s like, ‘How would you like to be my vice president?’” Davis said.

Davis, junior political science major, has served as a Student Government Association Senator since his freshman year and is the App State delegate for the Association of Student Governments. ASG is a student organization designated “to represent the interests of students in the deliberations of the UNC Board of Governors,” according to its website.

Davis was raised in Wilkesboro, but was born in Boone.

Davis said one of the benefits about growing up in Wilkesboro was the emphasis on personal relationships.

In high school, Davis was on the swim team and played soccer, and loved working out to relieve stress. He’s a fan of App State and UNC-Chapel Hill sports, where he also got in and where his brother goes.

“I thrive off social interactions with people,” Davis said. “I don’t really like being by myself that much, even when I need to study.”

Running for vice president is surreal for Davis.

“It was something I always wanted to do, but when it actually happens it’s like wow,” Davis said.

The Milbourne.Davis ticket is running unopposed. Picking Davis as a running mate was a no-brainer for Milbourne.

“He’s always had really good character and I’ve always appreciated that and he seems to be very loyal, not to a person, but to the greater good,” Milbourne said.

Milbourne said some people join SGA for different reasons like creating a certain bill, but Davis joined because he wanted to help people.

Davis said he was most proud of co-sponsoring the Mountaineer Meal Share Act bill, which was passed in April.

The act allows students or non-students to donate meal plan money to those in need.

When he was helping with the bill, Davis said he realized that it would positively affect the student population.

Davis said as vice president he wants to recruit more people to SGA.

“I remember my freshman year there were 12 Senate seats and 32 people declared to run,” Davis said. “I remember at the interest meeting there were 50 to 100 people there, so I want to bring that back.”

Davis said Milbourne is a good friend and someone who mentors others.

The pillars for the Milbourne.Davis campaign can be found here.