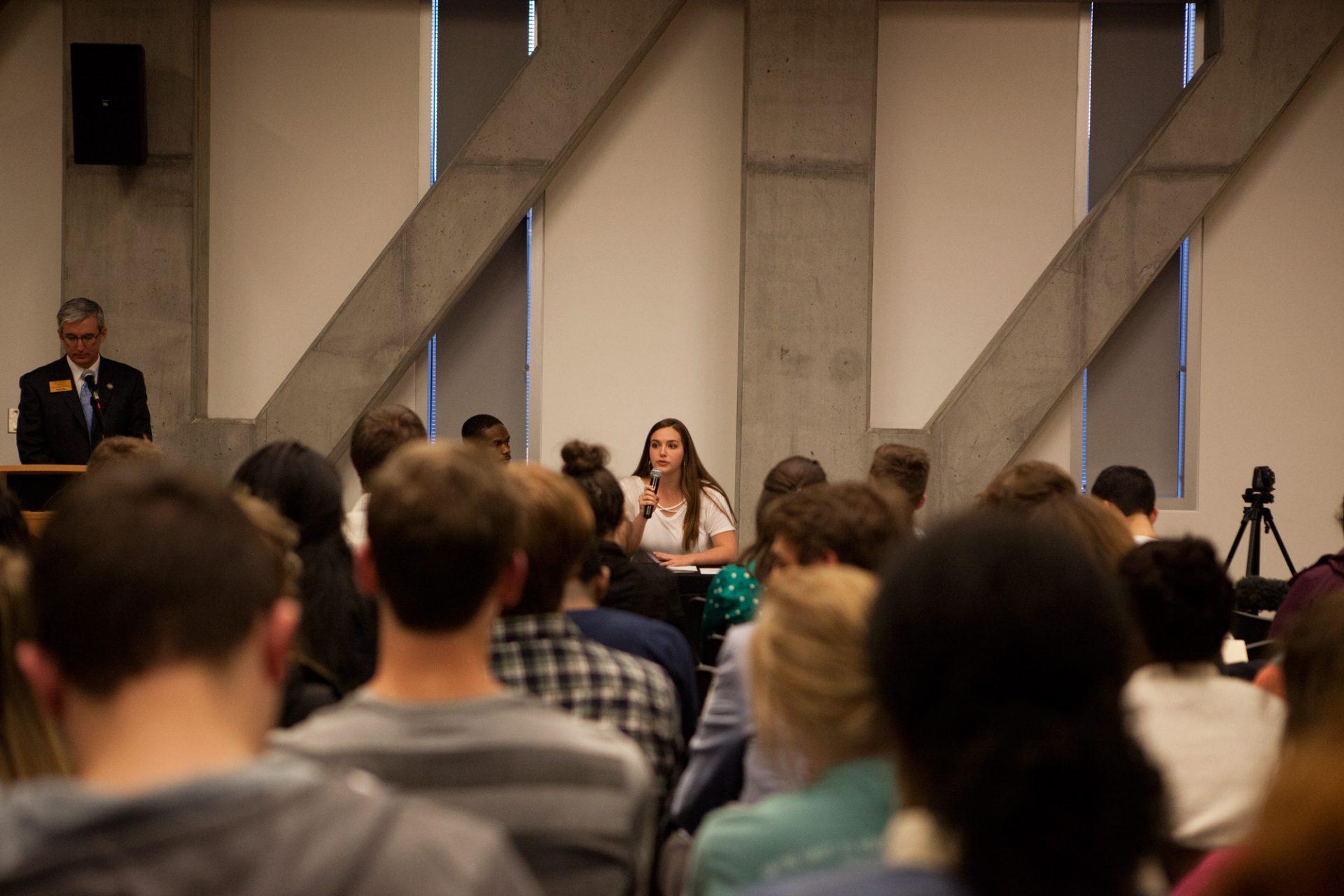 This week marks the 52nd election for representatives for App State’s Student Government Association. Before polls close on Friday, presidential and vice presidential candidates answered student and moderator-prepared questions during a public debate.

The presidential candidates, DeJon Milbourne and Anderson Clayton, are both seniors. Milbourne is an economics major and Clayton is studying both journalism and political science.

Before questioning began, each candidate presented their opening statements.

Clayton is the current SGA president with graduating vice president Alan Lee. Because she did not want to see her administration’s initiatives left unfinished, Clayton said she wanted to seek reelection in order to finish those pieces of business.

“We have the opportunity to make history this year because this is the first time Appalachian State has ever had a woman run for two terms in student government,” Clayton said.

Though not being involved with SGA his entire time at Appalachian, Milbourne said he felt he had an outsider’s point of view for how student government should operate.

“I think my experiences in other organizations and SGA has allowed me to have a perspective that I think is needed right now in our office, and I think it’s something that I think I’m very qualified for,” Milbourne said.

Clayton’s running mate, Chris Hinton, sophomore management major, is the current Chief Financial Officer under the current administration. Hinton said one of his major priorities is to increase SGA engagement with students who previously had little interaction with, or no idea, what SGA is.

Milbourne’s prospective vice president, Brigitte Kelly, sophomore political science major, has been in student government since high school. Kelly said that as soon as she came to Appalachian she began petitioning to run for student government immediately.

During the debate, each platform had 2 1/2 minutes to respond to curated and student questions while the opposition had optional 30-second rebuttals before answering the question themselves.

One question asked each candidate what their first priority of business would be if elected.

Clayton said she would finish implementing the Mountaineer Meal Share program that is aimed at providing aid for students who frequently cannot afford to purchase food. Clayton said the Meal Share program would work with students, financial aid and donors to subsidize food costs for students in need. At the end of terms, students with funds to spare would also have the option to donate any remainder meal plan monies to a designated Meal Share fund.

Hinton said his priority would be to fill all SGA senatorial seats to improve representation in diversity. Of the Senate’s total 86 seats, 19 of those seats are currently empty.

Milbourne wants to focus on providing wide government support to students and student organizations, Milbourne said. Rather than provide simple solutions to issues that will arise, he hopes his administration would work with organizations, preparing themselves to be self-reliant for years to come.

Kelly said she was “in compliance with Chris (Hinton in that) there’s a definite lack of representation in the student senate,” and that it could potentially worsen with recently passed legislation that will reduce the number of senate seats starting next year.

When asked how they planned to work with organizations in Appalachian’s Club Council, Clayton/Hinton said they planned to use SGA’s budget remainder to support groups that lack funding. Milbourne/Kelly said they would work with groups to create ways of raising funds so as not to be dependent on student government.

The evening’s final question asked candidates how they planned to engage with those students that are unfamiliar with SGA. All candidates said it would be important to campaign and speak in sections of campus that are outlying from SGA’s office in Plemmons Student Union, both during the election and after.