The SGA Student Senate voted against initiating a review for impeachment on SGA President Anderson Clayton, a junior journalism and political science double major, for 27 violations of the student government constitution and bylaws on April 10.

Fifty-one percent of the senate voted in favor, 44 percent voted in opposition and 4 percent abstained. This fell under the two-thirds vote needed to initiate the review.

Clayton was not at the senate meeting as she was attending to a separate commitment.

The article, “AoR 051-001 Articles of Impeachment – Student Body President Clayton,” requests an investigation into Clayton for “Malfeasance in office,” “Failing to execute the responsibilities of the Executive” and “Showing a willful contempt for rules and due process.”

This article was introduced by Resident Housing Association senator Jared Mark, a sophomore political science major, at the meeting when he invoked North Carolina state law to go into executive session to discuss the article, according to the meeting minutes.

Mark included violations in the article such as: violating nine separate election bylaws, violating bylaws about only providing “objective comments regarding the implementation of the specific items being considered” and failing to disburse all of the funds that had been set aside by the budget.

“Usually if you want to say something in SGA you kind of like shoot Alan (Lee) an email, like, ‘Hey, do you mind if I stand up real quick and say something?’” Bouzigard said. “Usually they’re announcements and they’re an informal discussion.”

Members of the senate were confused until sophomore class senator Lee Franklin, a sophomore political science major explained that the review was the first step of the impeachment process, according to the meeting minutes.

Lee, a senior political science major and the vice president of SGA, wanted to include the advisors of the SGA, Jeff Cathey, director of the Department of Student Engagement and Leadership, and Leroy Wright, associate vice chancellor for student affairs, in the discussion. 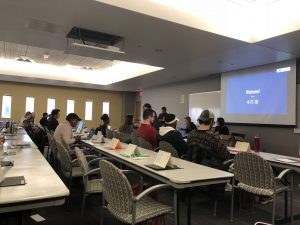 Members of SGA attend the first meeting after the impeachment review.

Freshman class senator Lauren Moody, a freshman political science major, motioned to block this, however her motion did not receive the vote needed to prevent Lee from including the advisors.

The College of Arts and Sciences senator Andrew Strahan, a junior political science major, attempted to move to have the meeting come out of executive session, but this failed to pass.

Debate ensued about the nature of the article, what the vote meant and whether or not discussion could be moved out of executive session. After a period of debate, Franklin initiated the vote on the article, which failed to pass.

Mark, who was appointed to the senate by the RHA, talked about his reason for drafting the article.

“It was my understanding that President Clayton was not upholding the values of the constitution and our bylaws that we have come to create together as a student body senate and as a student government association,” Mark said. “So I just wanted to set precedent for the next student body president and their posterity to understand that the constitution bylaws are there for a reason.”

Clayton said that she felt blindsided by the article.

In an email after the meeting, Cathey said that the situation disappointed him.

“Credibility is essential for SGA. Credibility both with the student community and with campus leadership,” Cathey said. “The organization must be careful in management of internal concerns that could serve to undermine that credibility.”

Clayton lost the recent election to President-elect DeJon McCoy-Milbourne, a junior accounting major, but she was recently elected to be the vice president of The University of North Carolina Association of Student Governments.

On Sunday, Mark was appointed by President-elect McCoy-Milbourne and Vice President-elect Brigitte Kelly, a sophomore political science major, to serve as the Director of Student Affairs for the 2018-2019 school year.

SGA holds Student Senate meetings Tuesdays at 6:30 p.m. in the Linville Falls room of the Plemmons Student Union. They have two more regular meetings left in the year. Minutes of previous meetings may be found on the SGA website.