Shaver sets new school record with vault of over 17 feet 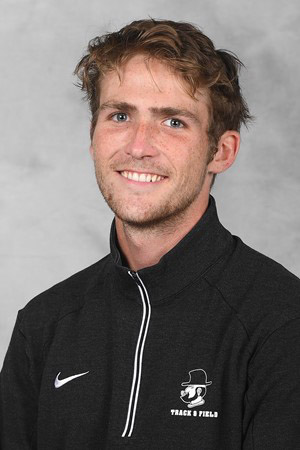 A new school pole vaulting record was set when senior Tristan Shaver cleared a vault of over 17 feet, eclipsing a 1998 mark of 16 feet, 8 inches.

Senior pole vaulter Tristan Shaver has won the pole vault in each of the team’s four meets this season. He also broke a school record at the Buccaneer Track and Field Invitational, hosted by East Tennessee State.

Shaver cleared a height of 17 feet,  1/2 inches, shattering the previous record of 16 feet, 8 inches Todd Poremba set  in 1998. Shaver said he set his sights on that record his freshman year.

“That was my highest jump ever,” Shaver said. “I came very close to it once my freshman year, and it took me until now to finally get over it.”

Shaver is no stranger to excellence in the sport. In his career at Ledford Senior High School in Thomasville, North Carolina, Tristan was a three-time outdoor conference champion in the pole vault.

He was also the outdoor regional champion and the indoor state champion his senior year.

Since joining the App State team in 2015, he has competed in the Sun Belt championships for both indoor and outdoor track and field. His best finish was in 2018 where he placed fourth overall.

He also qualified for the NCAA East Preliminary Round in the pole vault last season, where he finished 33rd overall.

“My coach and my teammates are my support system,” Shaver said. “When I’m in the runway I look to my teammate Mike and we do our handshake that we’ve always done. When I’m on the runway, hearing my teammates and coaches yell really helps with my confidence.”

Shaver has won four out his five meets this indoor season, earning him the second in the overall rankings for pole vault.

The Sun Belt Indoor Championship begins Feb. 18 with the NCAA tournament following closely behind that. With momentum from his five straight victories, Shaver hopes to continue his streak and trump his previous fourth place finish.