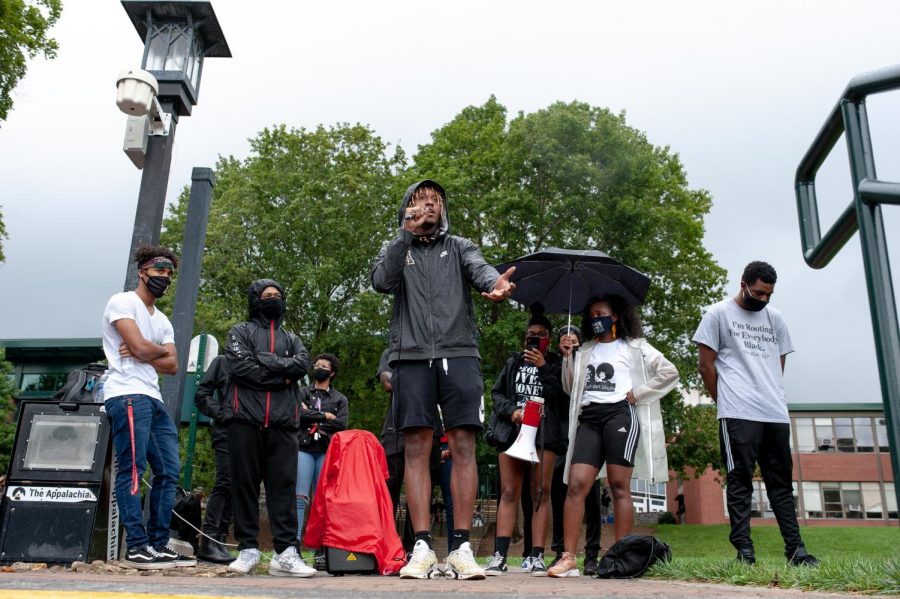 Camerun Peoples speaking during the Wake the Chancellor event on Sanford Mall Aug. 31, 2020.

Nearly 250 students from all walks of campus life, faculty and police gathered Monday to share stories and march alongside the Black at App State Collective from Sanford Mall to Chancellor Sheri Everts’ office. The group garnered attention for demands they sent to the university this summer, and organized the march against injustice to “wake the chancellor.” The collective says the university has not met the group’s demands, which focus on programming like diversified recruiting and a bias reporting system.

Jay Edwards, another leader in Black at App State, asked all non-Black attendees of the march to kneel in reflection.

Students lined up at a microphone on the mall to share their stories about being Black at App State.

Fennell has lived on campus for nine semesters now, and said after all his years working to make campus a safe space for Black students, and being silenced in the process, he is proud to leave the work to the collective when he graduates in December.

Olivia Shepherd, a member of the Black Student Association executive board, said she’s wanted to go to App State since she was 4 years old. But, when Everts didn’t say Black Lives Matter in her statement on racial injustice, Shepherd said she wanted to transfer.

“It crushed my heart. It ruined my day,” she said.

Shepherd said it’s disappointing that the chancellor is so enthusiastic about the football team, of which many of its players are Black, but can’t say, “Black Lives Matter.”

“We should feel safe,” Shepherd said. “It is (Everts’) job to make us feel safe, regardless of race. So we need the change, and we need to see it now. We are the change.”

Kynda Bichara is the president of the Black Student Association and a leader of the collective. She says she’s tired.

“I’m president of two (organizations), that’s not by choice,” she said. “Some things you have to step up and do because others are not doing them.”

Bichara told the crowd they need to show up all of the time – not just on social media or when there are protests – but in their classrooms and with their families.

In the wake of the police killings of Breonna Taylor and George Floyd, and the recent shooting of Jacob Blake, Bichara said she is expressing anger, but it isn’t coming from hate.

“When we say Black Lives Matter, we say that because we’re being killed, we’re being executed,” Bichara said. “I am Breonna Taylor, my brother is George Floyd …. But they ask why I’m an angry Black woman. Maybe it’s because you’re killing my brothers, my fathers and my son.”

Data compiled by The Washington Post show that the rate at which Black people are killed by police is more than twice the rate for white Americans.

Black at App State members shared frustrations at the lack of communication they had received from the chancellor and university administrators.

At the march, the collective shared that in a meeting with the Chancellor’s Cabinet this summer, their group was muted and not allowed to use the chat function in Zoom. They also said the university switched to using their own Zoom link at the last minute, instead of using the link the collective shared ahead of time.

“I know they see us,” Cummings said. “They send us emails in private, telling us to have coffee. (Emails that say) ‘We support y’all.’ What are they doing?”

Everts did not show at the march; however, other administrators, like Jeff Cathey, director of Student Engagement and Leadership, and Willie Fleming, chief diversity officer, attended the march and continually communicated with the leaders of the collective.

In a statement to The Appalachian, Everts said she and her team are moving forward with work on the collective’s concerns and the university’s strategic diversity plan.

“Black Lives Matter. Students, faculty, staff, alumni and members of the university administration share a strong desire, sense of urgency and a steadfast commitment to move forward on the diversity and inclusion work that is underway at App State and to begin on important new work that needs to be done,” Everts said.

Later, the group made its way down and across lanes of traffic stopped by App State Police toward B.B. Dougherty administration building, where Everts’ office is located. There, students occupied three floors of the building and chanted “Hey, hey, ho, ho, Sheri Everts has got to go.”

NEW: @BlackAtAppState’s “Wake the Chancellor” march has moved inside the administration building where @AppChancellor’s office is located. pic.twitter.com/jYgVKo89sr

When participants entered B.B. Dougherty, App State Police informed them that when the building closed at 5 p.m., they needed to leave, said Andy Stephenson, chief of App State Police.

When that time came, Capt. Johnny Brown, patrol commander for App State Police, formally asked all attendees to leave the building. But, several participants and members of the collective stayed inside.

Outside, supporters stayed at the doors to B.B. Dougherty and watched a live stream Bichara posted to the Black at App State Instagram while inside with police and administrators. Cummings amplified the live stream through a megaphone for supporters

Korbin Cummings is streaming @BlackAtAppState’s live through a megaphone so students outside can hear. pic.twitter.com/G0INx0Wa5l

“There’s some values we have to stand for,” Bichara said on the live stream.

When several members of the collective left B.B. Dougherty, they were crying with tickets clutched in their hands. But, Stephenson says police did not issue citations.

Cameron Hunter, SGA VP, holds his ticket from @appstatepolice. He was in the building with other @BlackAtAppState leadership after 5:00 p.m. pic.twitter.com/y8Jfe3CJ4c

“After meaningful dialogue, negotiation, and open discussion about issuing citations, participants chose to leave the building with no citations issued. The interaction with participants was calm, transparent and cordial,” Stephenson said.

Bailey Gardin, a member of the Black at App State Collective said the citations were rescinded on behalf of an administrator or faculty member who was present.

Mary Lyons, an App State alumna, came to the march after she heard about police presence inside.