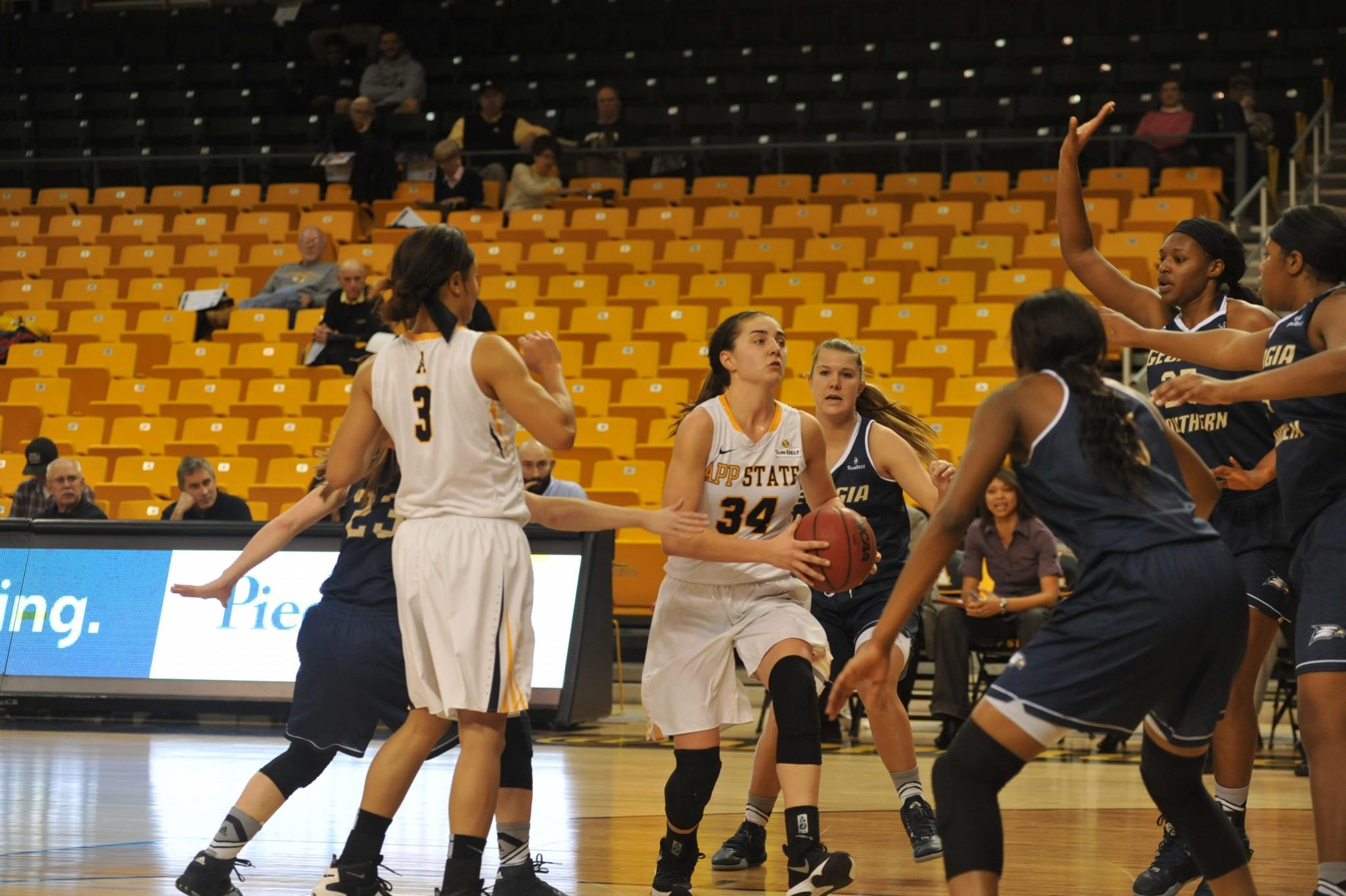 Madi Story gets swarmed by the Georiga Southern defense on her way to the basket in the Mountaineers 65-50 loss Monday night. Photo Credit Dave Mayo

Going up against school rival Georgia Southern (6-11, 3-5 Sun Belt) two days after being postponed because of winter storm Jonas, App State (5-12, 2-6 Sun Belt) women’s basketball couldn’t seem to get over the cold weather, posting an ice cold shooting night and falling to the Eagles 65-50.

“I thought I would be thanking blizzard Jonas for the extra couples days of practice, but, [in] hindsight looking at it, I take responsibility for two tough days because it obviously affected our shooting tonight,” head coach Angel Elderkin said.

Both teams had decent shooting percentages in the first quarter. Georgia Southern shot 64.3 percent from the field and App State shot 50 percent — the best shooting the Holmes Center crowd would see all evening.

“I think as a whole our team had a lot more energy in the first half,” Story said. “Our transition really gets us going and we didn’t have any of that in the second half.”

The second quarter showed the Mountaineers’ fatigue when they shot only 11.8 percent from the field and went 0-5 from the 3-point line. Both teams went on three minute or more scoring droughts and the Eagles led 36-35 at the half.

“I think the extra practice did affect us mentally. We should be in better shape and mentally tougher than that,” Story said.

In the second half, junior guard Joi Jones helped make up for Story’s lack of points, scoring nine of her 11 points, and hauled in eight rebounds.

Georgia Southern found its shooting touch during the second half and began to pull away, holding a 22 point lead at one point. The Mountaineers began taking desperation threes to narrow the lead.

“Towards the end we were down such a big deficit we were just trying to get a three to get back in it,” Elderkin said.

Elderkin knows her team is not the best 3-point shooting team and that it hurt them.

“We aren’t a very good 3-point team so if we are forced to shoot a lot of threes, it’s generally not in our favor,” Elderkin said.

The Mountaineers finished the game as strong as they could, making some late baskets, but ultimately fell 65-50 to a big conference rival.

“It’s not about the bounce back, it’s about what you learn to move forward. It’s about taking a step into the future and that’s what we plan to do this weekend in Alabama,” Elderkin said.

App State has a short time to recover from their shooting woes with a game at Troy on Thursday at 6:15 p.m.