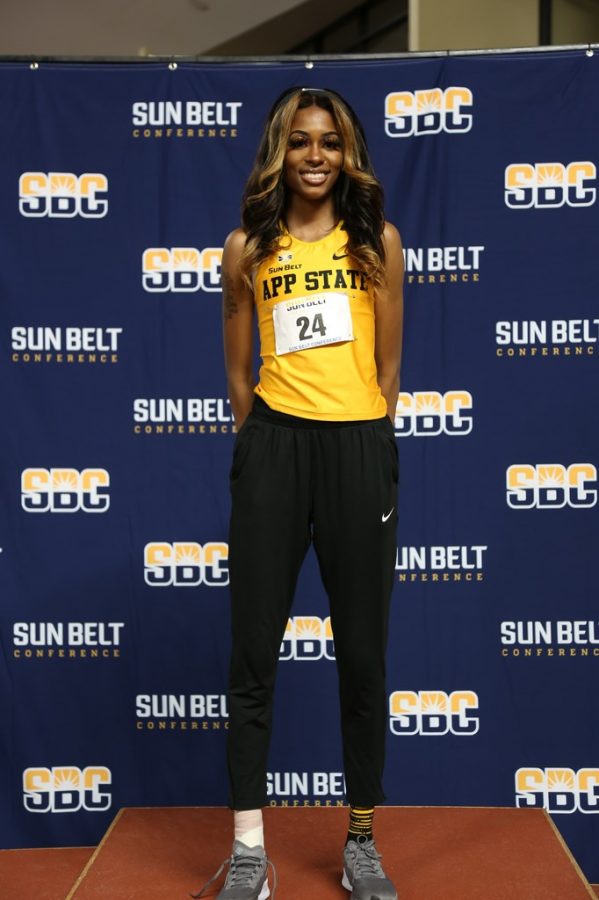 App State men’s track and field finished sixth of eight teams with 60 points, and the women’s team finished ninth of 12 teams with 29 points in the indoor Sun Belt championships in Birmingham, Alabama.

Arkansas State claimed the team title with 146 points, UT Arlington was second with 130 points and Texas State rounded out the top three with 95 points at the meet Feb. 22-23.

In the women’s championship, after posting leaps of 41-5.00 feet (12.62m) and 41-7.00 (12.67), senior Peighton Simmons secured her first individual and App State’s 16th triple jump conference championship in program history. A Mountaineer has not secured the title since 2010, when Danielle Thorpe won.

Simmons’ jump is good for third all time, behind Thorpe in 2010, and her own PR in last year’s indoor championship of 12.77m.

“As crazy as I feel for saying it, it was a very bittersweet moment,”  Simmons said. “I’m ecstatic to have secured a championship title and to help score points for my team, but I didn’t jump the mark I was aiming for. Securing the triple jump title left me hungry for more and ready for outdoor season.”

“When she came in, she was capable of winning the Sun Belt,” App State head track and field coach Damion McLean said. “We told her, ‘I expect you to be at the top of the Sun Belt as well,’ and now, after three to four months, she’s done that already.”

In the distance medley relay, senior Jessica Dixon, juniors Kylee Frady and Izzy Evely, and freshman Jasmine Donohue combined for a fourth-place finish with a time of 12:05.75, earning five points towards the team score. Frady and Evely also competed in the 3,000 meter run, where they placed sixth and seventh respectively.

Junior Bridget Kunkel also earned points for the Mountaineers, shattering her 5,000-meter run PR by nearly a minute, with a time of 17:37.80 to place sixth overall.

In the men’s championship, senior sprinter De’Shawn Ballard broke his own school record in the 200-meter dash, finishing in 21.16 seconds.

In the men’s distance medley relay, the team of senior Zachary Mercer, sophomore Mitchell Harris, senior Sean Doyle and sophomore Ethan Barber recorded a fifth-place finish with a time of 10:31.20.

Ballard, Johnson and Harris teamed with junior Dylan Blankenship for a seventh place finish in the 4×400-meter relay with a time of 3:35.91.

Each team now looks forward to the outdoor season, and hopes to build off their performances in the indoor championship.

Arkansas State claimed the team title with 146 points, UT-Arlington was second with 130 points and Texas State rounded out the top-three with 95 points.

“As a collective, the 2021 indoor conference championship wasn’t what we wanted it to be,” said Simmons. “We now have to go into outdoor season hungry for more championship titles, aggressive, and ready to outperform ourselves and compete to the degree that we already know we’re capable of.”

The outdoor season is slated to begin March 19, as the Mountaineers travel to the Queen City for the 49er Classic in Charlotte.