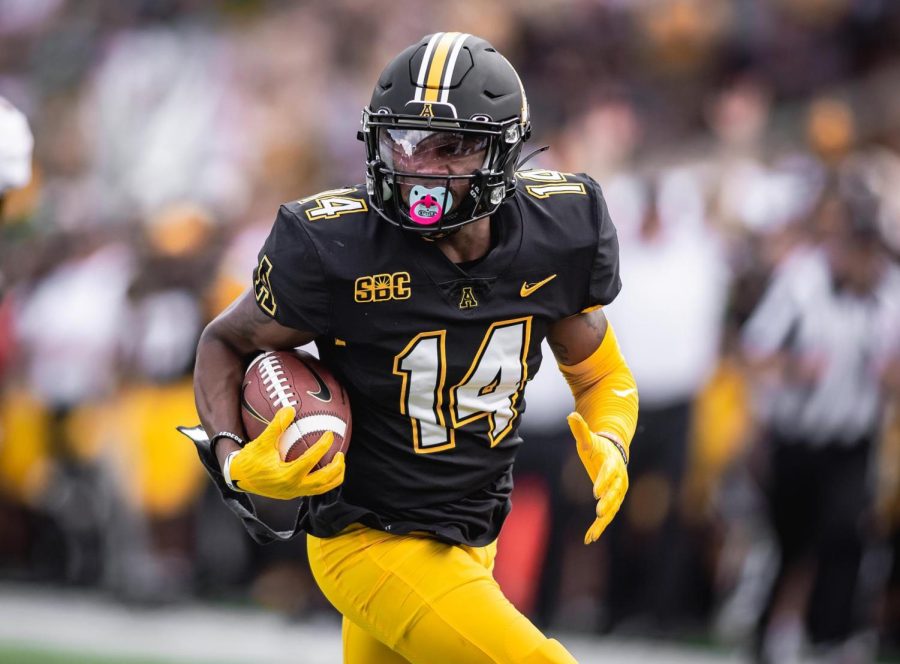 The 2022 NFL Draft saw the New Orleans Saints select standout linebacker D’Marco Jackson in the fifth round, but five other teams had eyes on former Mountaineers.

Defensive end Demetrius Taylor signed with the Detroit Lions shortly after the draft ended Saturday. He becomes one of four rookie defensive ends for the Lions, a group featuring second-overall pick Aidan Hutchinson out of Michigan. In terms of veteran presence, the Lions’ defensive end room is anchored by Michael Brockers, a former first round selection for the then St. Louis Rams in 2012.

Taylor was a nightmare for opposing offensive linemen during his five-year tenure at App State. Taylor, who is lovingly referred to as “Meech” by fans, students and teammates alike, posted at least six sacks in each of his final three seasons for the Mountaineers, including 2019, where his seven takedowns combined for a loss of 74 yards for opposing teams.

Shaun Jolly joins an impressive Cleveland Browns defense that features cornerback Denzel Ward and consistent Defensive Player of the Year candidate defensive end Myles Garrett. The Browns have not had success for the past decade, but the team has shown a rise in the last four seasons. Despite the slight dropoff last season, the team has been the model for improvement, winning 11 games in the 2020-21 season, three years after going winless in the 2017-18 campaign.

Jolly leaves App State after four seasons with the Mountaineers. Most notably of those four seasons was his 2019 campaign, which saw Jolly intercept five passes, two of which came at Georgia State. Jolly earned second-team All-American honors for his 2019 breakout season and was named to the first-team All-Sun Belt squad each of his final three years.

Jalen Virgil signed with the Denver Broncos before the final pick of the draft was announced Saturday night. His contract includes a $12,500 signing bonus and $30,000 guaranteed, according to a tweet by Pro Football Network reporter Aaron Wilson. Virgil jumps into the NFL after putting his impressive speed and athleticism on display at App State Pro Day. He joins a receiving core highlighted by Courtland Sutton and Jerry Jeudy. The most impressive part of the Broncos’ offense is future Pro Football Hall of Fame quarterback Russell Wilson, who will be distributing the ball in Denver for the first time this fall after being traded from the Seattle Seahawks.

Virgil will likely be used primarily for special teams in his rookie season, as that was his strong suit at App State. Virgil returned three kickoffs for scores in his five-year career for the Mountaineers, including two in his final season. Despite only returning kickoffs for two seasons, Virgil leaves App State with the eighth-most return yards and tied for the most return touchdowns in program history.

Malik Williams signed with the Buffalo Bills after going undrafted. The Bills added Williams to an already impressive offensive unit, featuring generational talent such as quarterback Josh Allen and fellow wide receiver Stefon Diggs. Buffalo has been a Super Bowl favorite for the last two seasons, and it looks to finally make the dream of being champions a reality in the 2022-23 season.

Williams consistently improved during his five-year tenure at App State, going from 19 receptions for 172 yards in 2017 to 52 receptions for 819 yards in 2021. The 2021 campaign was an impressive year for Williams, highlighted by a career game against No.14 Coastal Carolina. Williams tallied 10 receptions for a career-high 206 yards and a touchdown in the upset over the Chanticleers. Williams leaves his mark in the App State record book, finishing fifth all-time in both receptions and receiving yards and tied for seventh all-time in receiving touchdowns.

Corey Sutton joins Demetrius Taylor as Mountaineers in Detroit. Sutton joins a Lions offense that struggled in 2021, despite having talents such as tight end T.J. Hockenson and wide receiver Amon-Ra St. Brown. The Lions’ offense is centered around seventh-year quarterback Jared Goff, who joined the Lions last year following a trade with the Los Angeles Rams.

Sutton began his career at Kansas State in 2016 before transferring to App State in 2017. Sutton was required to sit out of the 2017 season per NCAA transfer rules but had an immediate impact in 2018. Sutton showed out week two of 2018 at Charlotte, hauling in three receptions for 155 yards and two scores. Sutton’s 2019 campaign was shortened to just nine games following a knee injury and he opted out of the 2020 season. Sutton came back in 2021 as quarterback Chase Brice’s favorite target, earning a career-high 904 yards in the season.

Sutton finishes his App State career with the third-most receiving touchdowns in program history while also coming in at sixth in receiving yards and tied for eighth in receptions.

Thomas Hennigan finds himself going from one cold climate to an even colder one as the Minnesota Vikings signed one of the most iconic Mountaineers of recent memory. Hennigan joins a receiving core that features elite talent such as Adam Thielen and 2020 Offensive Rookie of the Year runner-up Justin Jefferson. The Vikings compete in the NFC North Division, the same division the Lions compete in. As a result, Hennigan is set to line up against former teammates Sutton and Taylor twice a year.

Hennigan, a fan favorite at App State, leaves Boone after a record-breaking career. The five-year veteran wasted no time making an impact, hauling in 45 receptions for 585 yards and seven touchdowns in his freshman campaign. Hennigan’s breakout game came against Louisiana in 2017 where he caught five receptions for 99 yards and a career-high four touchdowns. Hennigan was a model of consistency at App State and he’ll carry that into the NFL.

Hennigan leaves App State with his fingerprints all over record books. He finishes his career with a program record 242 catches while coming second in receiving yards and fourth in receiving touchdowns. Hennigan also holds the NCAA record for most career starts, starting all but one of his 66 career games.