Sizzling with Sam teaches student-athletes how to cook healthily 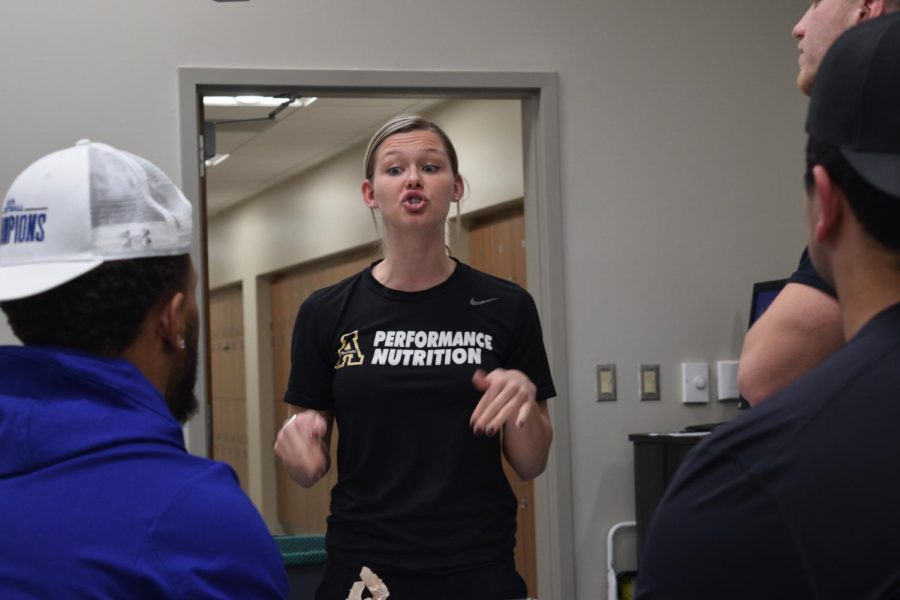 App State’s dining lab in Leon Levine Hall is primarily used for various cooking labs and nutrition classes, but once a month it is used for Sizzling with Sam, a cooking class for student athletes led by Director of Sports Nutrition Sam Mellert.

“I was on my interview here, and we actually toured the kitchen, and they were saying this would be a great opportunity to do cooking classes, so I didn’t even know that had existed until I went on my interview,” Mellert said. “So, right when I came here, I started talking to the faculty over there to see if they allow athletics to utilize that space, and thankfully they were able to.”

Mellert had a variety of changes she wanted to make to App State’s sports nutrition program when she was hired in May 2019, such as bettering the education of the student athletes. Her cooking class does just that, giving student-athletes valuable hands on experience that also reflects her nutrition philosophy that food should be fun.

“I’ve seen a lot of athletes treat food like it’s not fun, and you have so many meals throughout the day that it really should be fun,” Mellert said. “We should be using that food to fuel the performance but also enjoy it at the same time,” Mellert said.

Student-athletes are commonly faced with struggles like time management and lack of resources, so Mellert focuses on easy-to-make, interesting and healthy recipes that student-athletes can use in college and beyond.

“I really like it, I feel like it gives student-athletes the power over their own nutrition, which is something we’re going to have to learn when we leave college. We’re not going to have people telling us what to eat all the time,” said Tess Cairney, senior women’s soccer player.

Mellert has received nothing but positive feedback since she started her cooking classes, as many student athletes who sign up once end up re-signing up for the following month’s class.

“I think the student athletes have realized that she’s invested in them, and that goes back to the old adage that people don’t care about how much you know until you know how much they care. Well, Sam cares about student athletes, she wants them to thrive, and I think that’s why on the back end this is a great opportunity,” said Jon Mitchell, senior associate athletics director for student-athlete health and well-being.

Through Mellert’s dedication to educating athletes through Sizzling with Sam, student-athletes have learned about the benefits of having a healthy diet and how it affects them on and off the field.

“It changes your performance by 1%, and that 1% is what matters in my opinion,” said Kelan Swales, sophomore men’s soccer player. “You’ll see you sleep better, you wake up better, you feel better on the field, you feel better in the classroom; nutrition is huge and it sets you up for your life to be able to cook for yourself or when you get a family.”

Editor’s Note: Kaiden Smith is a student-athlete at App State.