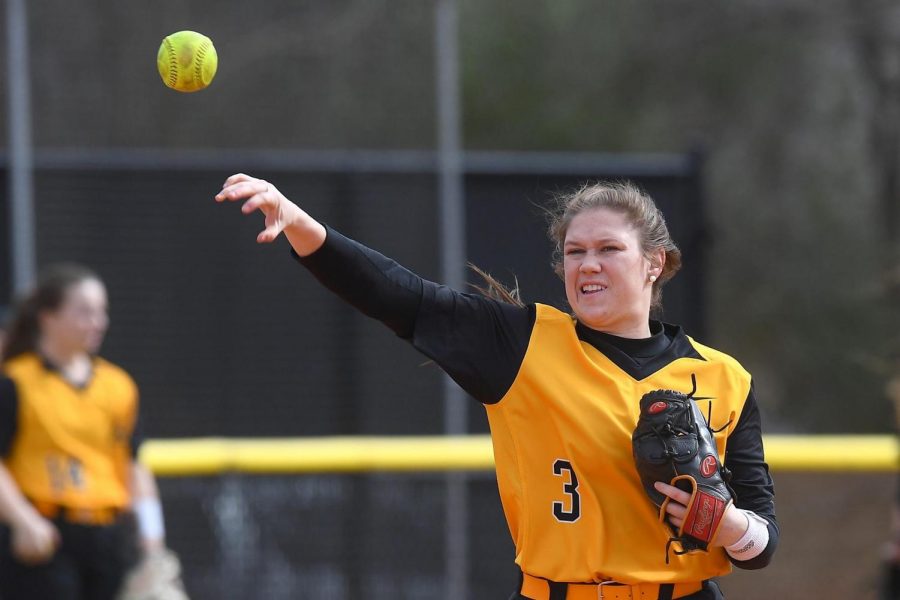 Senior third baseman Keri White makes a play during a game last season. White led the Mountaineers in seven statistical categories and was named to the all-Sun Belt second team a season ago.

In 2019, App State softball tied the program record for most wins in a season with a 31-25 record, including a 13-13 mark in Sun Belt play. The Mountaineers had the longest winning streak in program history when they won-eight straight between Feb. 15 and March 1. The team also qualified for the Sun Belt tournament for the first time as the fifth seed.

The 2019 season was a huge turnaround from the 2018 squad that went 17-35 and 4-20 in Sun Belt play. Head coach Shelly Hoerner, who’s in her third year at the helm of the Mountaineers, expects the team to build off of everything they accomplished a season ago.

“It’s a new team, so the expectation is to win — always,” Hoerner said. “We’ve got high expectations because we did do well last year, and especially well for what the program has done.”

This year’s team features a nucleus of experienced returners, including a pair of all-Sun Belt selections. Senior pitcher Kenzie Longanecker became the first Mountaineer ever named to the all-Sun Belt first team after going 14-9 with a 2.40 ERA and 95 strikeouts in 2019.

Senior pitcher Sydney Holland also won 14 games last year, tying with Longancker for the most wins in a season in program history. Holland led the team with a 2.16 ERA as well. This is her second season with App State since transferring from Francis Marion after the 2018 season.

“This season, obviously we want to take what we did last season and use it, but we have to focus on right now and (take it) game-by-game,” Holland said. “Our goal is to make it (to) postseason, but we really just have to focus game-by-game because that’s what’s going to get us there.”

Senior third baseman Keri White was named to the 2019 Sun Belt second team after leading the Mountaineers in seven statistical categories from the leadoff spot. She hit .347, scored 38 runs and was a perfect 13-for-13 on stolen base attempts a season ago.

“It’s my last year, I’ve been here for three years, I’ve seen the conference, I know what it’s about,” White said. “Just ready to build off of that, get better and do better than what I did last year.”

“It’s been a dramatic change,” White said. “When we went over .500 last year, I think the coaches have a big thing to do with it. They really invest in us and in the program, and then you have girls that want to be here and just do as much as they can to better themselves and the team.”

“There’s just so much change,” Hoerner said. “I think it’s just a total 180. I see the joy in them wanting to come to the field, them wanting to change the program. I think that I’ve seen change in every single one of them, and that for me as a coach is pretty cool to see.”

One of the big changes within the program is the strength of the relationships between teammates, Holland said.

“After we came back the first week, we kind of made a bond that we didn’t have in the fall,” Holland said. “Now, being like a week away from opening day, I think that we’re a lot closer so I’m excited.”

White pointed out that there are more personalities on this year’s squad than before. She said the team likes to have fun with each other, but that they also know when it’s time to focus and be serious.

“Out of those eight newcomers, we’ll definitely have a few in the lineup and some in and out of the lineup,” Hoerner said.

Hoerner said Emily Parrott, an outfielder from Palatine, Illinois, could be one of the freshmen that makes an impact.

“She’s got a great bat, just very consistent in the lineup and gets good reads in the outfield and has got some speed,” Hoerner said.

Hoerner also mentioned infielder Maegan Calandra from Pembroke Pines, Florida, as one to keep an eye on.

“She came in as a middle infielder, and we moved her to first base, and she has done a great job just embracing that role of change for us,” Hoerner said. “I expect her to do good things for us, too.”

The Mountaineers open their season on Saturday, Feb. 8 at the Charlotte Invitational versus ACC opponent Virginia.

“It’s my senior year, I want to go out with a bang,” White said. “I love this group of girls and everyone is amazing here.”