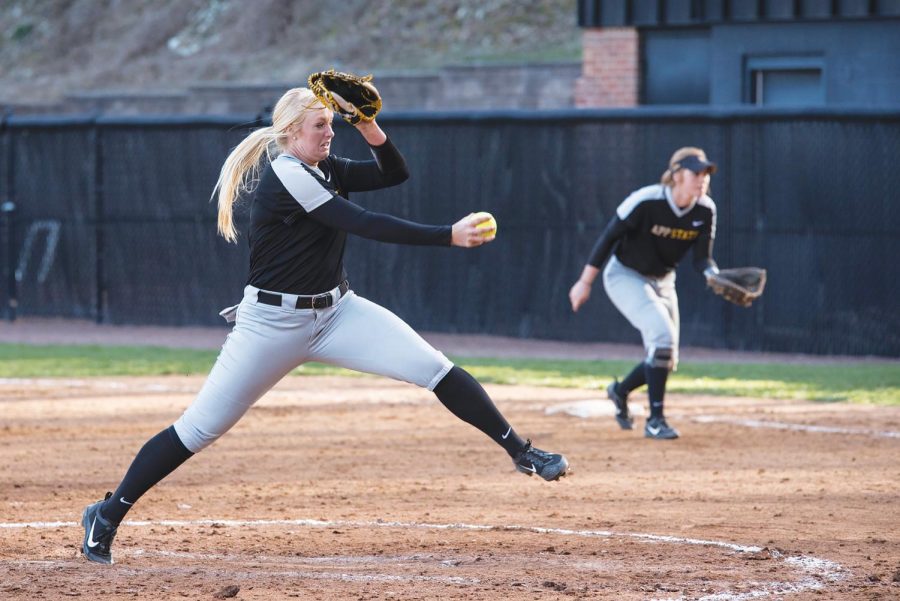 Junior pitcher Kenzi Longanecker winds up and fires to the plate.

After a 17-35 finish last season, the App State softball team looks to improve early in 2019.

After an offseason in which the team had several players earn numerous academic honors, players are displaying their hard work on the field.

Sitting at 13-6, the team is riding its best start in over 10 years. Earlier this season, the team held an eight-game win streak, the longest in program history, according to App State Athletics.

Head coach Shelly Hoerner is in her second year at App State and said she has worked with her team to bring a winning culture to the High Country.

“The vision that we’ve brought in as a staff, they have bought into and they want to win,” Hoerner said. “They want to take this program to the next level, and I definitely see they are more committed.”

After a 3-3 start, the team went on a six-game winning streak at the Holy City Showdown in Charleston, South Carolina.

White leads the team in batting average at .388 and the most at-bats with 67, which is good for No. 9 in the Sun Belt.

Longanecker is 7-0 on the mound for the season and sits at No. 5 in conference wins.

Stewart has 159 putouts in 165 chances and has committed only two errors in 2019. She leads the Sun Belt in both categories.

Hoerner said she will look for her squad to keep the momentum going for the rest of the season.

“We just need to be consistent in everything we do,” Hoerner said. “We need to stay focused on being in the moment, not worrying about the next game, just focusing on winning the inning and we’ll be okay.”