Softball scholars form relationships on and off the field 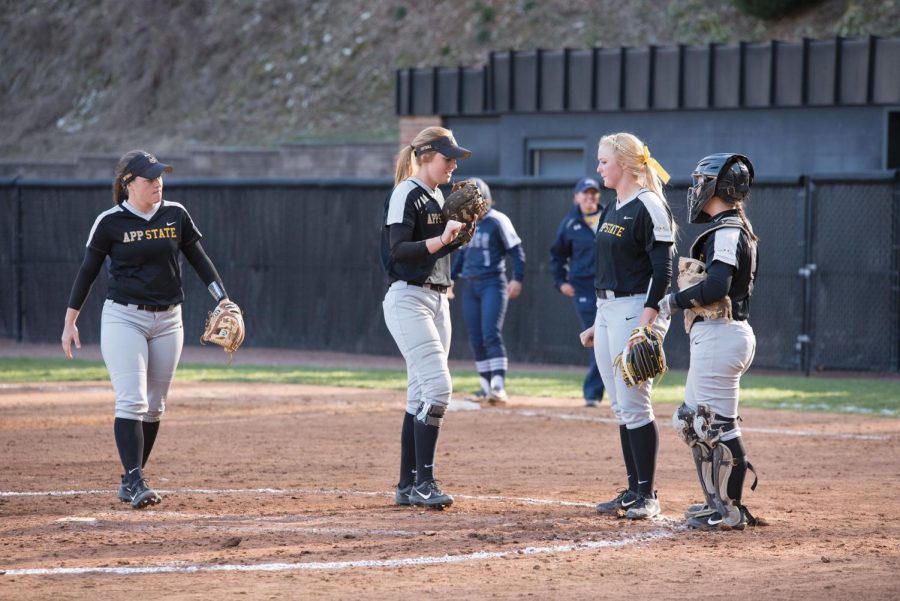 Players on the App State softball team discuss the next play during a timeout in the 2017 season. Courtesy of Halle Keighton.

Along with the warm weather that comes with spring comes new seasons for many App State teams including the softball team. After a 17-35 finish in the 2018 season, head coach Shelly Hoerner will look for her veteran-led squad to improve that.

The team showed high levels of commitment and dedication in the offseason as it made the biggest jump in team GPA out of any App State team and had five players named All-America Scholar Athletes for the 2017-2018 school year. Along with getting the job done in the classroom, the team has  also worked hard to see some of that success translate onto the field.

Senior utility player Ally Walters and senior infielder Haley Stewart will lead the team. Walters played in 45 games last season and posted a fielding percentage of .952. She also led the team in sacrifice bunts with 10.

Stewart, a redshirt senior, finished the 2018 season with a batting average of .220 and a six-game hitting streak. She was solid on the defensive end, committing only five errors in 411 chances. This gave her the second highest fielding percentage among the starting players.

The team will also benefit from the addition of transfer pitcher Sydney Holland. Holland is a redshirt junior who played at Francis Marion University in Florence, South Carolina, before joining the Mountaineers.

“Since I’m a junior and I came in with two years of college under my belt, I do feel I have the experience of being on the mound as a college pitcher,” Holland said. “Everyone on this team is extremely close. I feel like I can talk to anyone about anything at anytime.”

Hoerner said she has high expectations for the squad and knows she has plenty of players who can make big plays when the team needs them.

“I think everyone, every day competes and that’s that we’ve really established since the day I’ve been here,” Hoerner said. “Someone different every day steps up. I don’t look for anyone in particular because we really focus on team. Someone is going to be good one day, and someone is going to pick them up another day.”’

The Mountaineers open the season against Elon in the Elon Opening Weekend Tournament on Feb. 8.