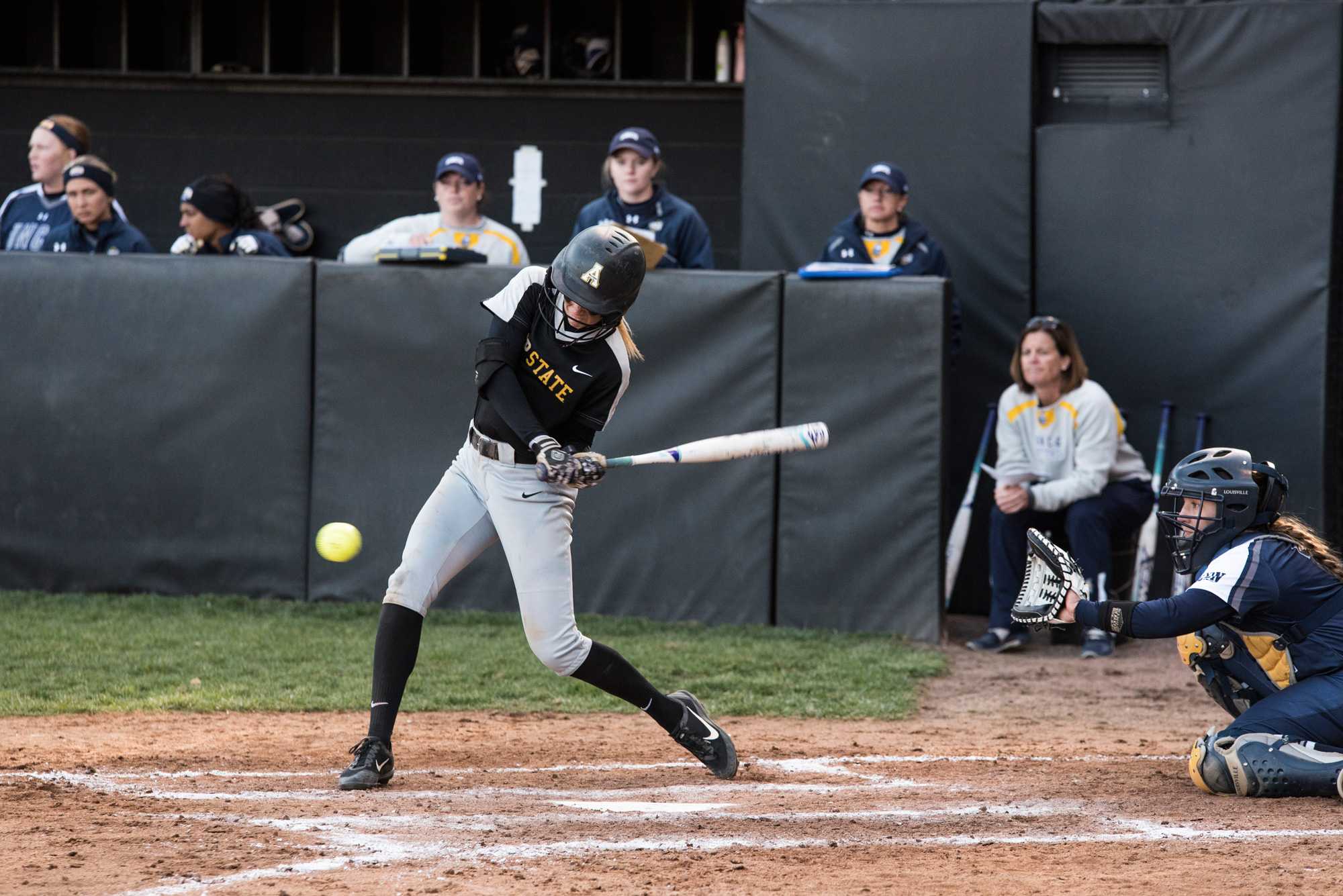 Sophomore Natalie Orcutt swings at the ball during the game against UNCG.

The App State softball team took on the UNC Greensboro on March 22 in the first game of a doubleheader with the Spartans (16-12). Sophomore pitcher Annaleise Kennedy started in the circle for the Mountaineers (2-4, 4.09 ERA) and faced off with junior Spartan Alicia Bazonski (11-7, 4.17 ERA).

There was little offense, but the crowd enjoyed some stellar pitching in a 2-1 win for the Mountaineers (12-12, 0-3 Sun Belt). Only two runs were scored through the first five innings, both by the Mountaineers, on just five hits.

Kennedy was removed from the game after 2.1 innings pitched, giving up one hit and allowing no runs. She was replaced by freshman Kenzie Longanecker (7-4, 1.76 ERA) who would go on to finish the game for App State.

Stout defense was played throughout the game by both teams, with one error being recorded by the Spartans in the sixth inning. Several running catches and sliding grabs in the outfield saved several hits for App State.

In the third inning, App State sophomore catcher Jenny Dodd came to the plate with sophomore left fielder Megan Walker standing on second base with two outs. With no runs on the scoreboard and only one hit, Walker knew she needed to make something happen.

“I had two strikes on me, and I knew she [Bazonski] had been trying to bust me in, so I knew to look fastball and adjust to a change-up,” Dodd said. “I was able to read the change-up out of her hand, and it was outside so I was able to take it out.”

The Spartans tried to get back into it in the sixth inning when designated pitcher Sidney Grkman homered to center field. But Longanecker shut down UNCG with three strikeouts in the seventh inning to finish the game in a 2-1 victory for the Mountaineers.

Appalachian State fell to UNC Greensboro in game two of the doubleheader to split the evening series in two very different games that consisted of very little offense in the first game to plenty in the second.

The Mountaineers controlled most of the game until UNC Greensboro’s (17-12) Rachel McClaskey delivered a two run RBI hit that sealed the game 11-9.

The Mountaineers (12-13, 0-3 Sun Belt) started the game off strong, picking the pitcher apart and putting up five runs on the board. Appalachian’s Ally Walters nailed a hit over the left field wall that resulted into a grand slam.

“I just wanted to be aggressive,” Walters said. “I just saw the first pitch and I went for it.”

The momentum was all on the Mountaineers side, and it felt like it was going to be another win for Appalachian.

The third inning blindsided App State, as UNCG was able to put seven runs themselves with the help of Greensboro’s Jordan Gontram. She delivered a grand slam of her own to put the Spartans up 8-7.

“They put up a big run and put us back on our heels,” head coach Janice Savage said. “I was proud of my guys the fought and continued to keep pressing.”

For every rally that the Spartans had, the Mountaineers would continuously counter and have one for themselves.

The Mountaineers were going into the seventh inning up one, and feeling comfortable because of Cara Parker’s solo shot. The worst inning for the Mountaineers came during the last inning they were held scoreless, as they did not reach base and were unable to hold on to the lead.

The Mountaineers will look to get back on track as they take on conference opponent Georgia State in Georgia this coming Saturday.