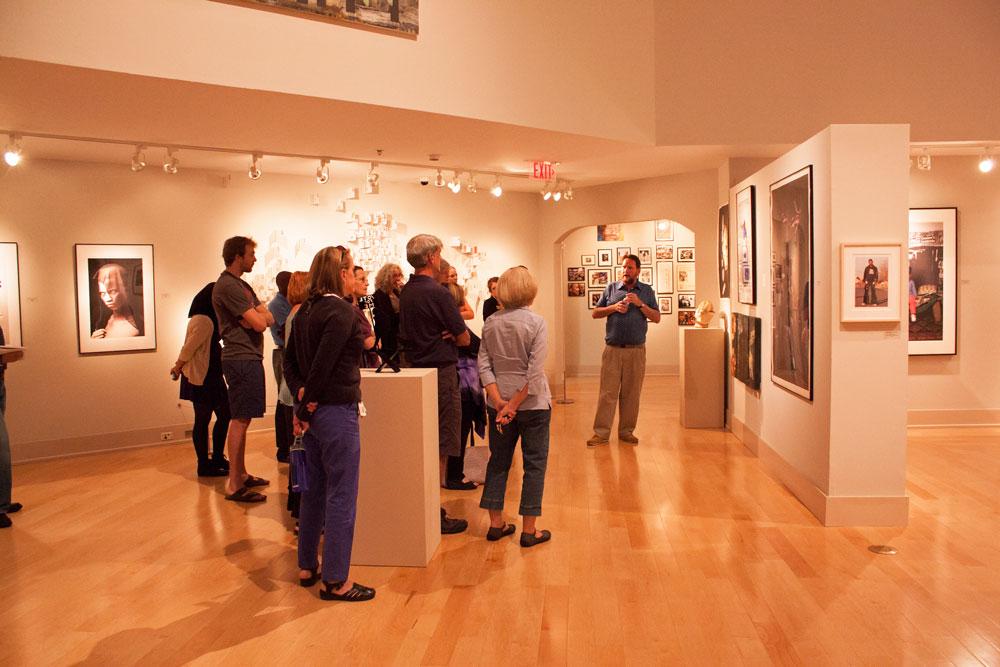 Visiting South African artist and sculptor Gordon Froud ended his 10-day residency at Appalachian State University on Friday, now moving on to Bloomington, Indiana and traveling the states for a short stint before heading back to his life as a full-time artist and teacher at the University of Johannesburg.

He said he was put in the hospital twice due to stress during the planning of TWENTY: Contemporary Art From South Africa. The exhibit, currently on display in the Turchin Center for the Visual Arts, celebrates 20 years of democracy in South Africa. Froud hopes this first major project will help to cement the relationship between the schools, which have been working together for the past few years.

The Appalachian: What did you think of your overall visit here? How was it?
Gordon Froud: It’s been incredible. The people have received me very warmly. The exhibition has had such a great response and everyone has been really great with wanting to know more, very hungry for information about South Africa and how things operate there. I’ve also been quite amazed with how surprised people are to learn South Africa is rather sophisticated. People might have been expecting noble savages or something but they’ve got something a little different from that.

TA: How has the response been from art students?
GF: They’ve been very engaged, very interested in the fact that our work is so much about subject matter and content as opposed to just making visually pretty pictures or interesting pictures. It’s about the content or what the work is about that grabs their attention.

TA: What have you been teaching in your workshops?

GF: I’ve been teaching about the history of printmaking in South Africa, particularly as a democratic print medium that allowed people during the struggling years to be able to disseminate information, and again the content that comes through in the printmaking. In the curatorial class I spoke about different notions of curating and how one has different approaches for putting exhibitions together sometimes for an economic reason or sometimes for a showcase like this or sometimes, again coming back to this, the democratic curatorial practice of trying to involve well-known artists beside other talents and finding a balance in the conversation.

TA: How did you get involved with the university?
GF: Our two universities have a memorandum of understanding and a bilateral agreement, so when they wanted to do a show that was incorporating the celebration of 20 years of democracy, they came out and set up a meeting with the University of Johannesburg where I am a senior lecturer, and the university of KwaZulu-Natal who they engaged with to create a music program, and they engaged us to put together a show. I was the one that got suckered into that, but I’m very glad to have been.

TA: Is this something you have done with other universities?
GF: I’ve done a lot of guest curating over the years but this is the first international exchange I’ve curated. This show is moving to China next year, so I will have the opportunity to visit there. Of course I won’t have the ease of language but it will be a very different experience.

TA: What are your thoughts on this collection?
GF: I think it’s really quite amazing. I sent them more work than they could realistically house here. I misunderstood the size of this place. I thought it would be about double the size that it ended up being, so there are about 50 pieces that didn’t make it to the wall, which is a pity, but I think because I wasn’t here for the hanging, that they did a very creative job of trying to make conversations and pull things together in such a way that there was meaning, but also so that it looked visually good on the walls. There’s nothing that I saw and thought we should change, which is good.

TA: Tell me a bit about your personal work, and how it relates or doesn’t to this collection.
GF: I’m a sculptor that works with found objects. I tend to use found objects in multiples – 10,000 coat hangers to make an artwork, for example – and I try to do it in such a way that the artwork changes your perception of what that object is. Once you’ve seen my coat hanger works you will never look at a coat hanger in the same way again. I’ve actually infiltrated your thought process in some way and changed the way that you look at things. It’s glorification of the very ordinary, giving it a repurposed meaning. In the show I don’t have much of my own work, I have a small collection upstairs but none of it is only my own, it’s all collaborative stuff around the notion of freedom of expression.

TA: What do you hope that people take away from your time here?
GF: I think the facts that will make them more curious about South Africa, and the facts that might have taken some of the tinge off of us being called the ‘Rainbow Nation,’ and that people will realize that we’re still a country with a lot of needs and a lot of problems and issues that are still left to be sorted out. As a young democracy of only 20 years, we’ve still got a hell of a long way to go. We are still in a very infantile stage. I think that’s what I wanted people to get from this exhibition, along with all these positive stories and great things that are out there and happening, there’s still a lot of stuff that needs to be cleaned up and sorted. The fact that we’ve still got 43 percent unemployment in our country means that at any given point more than 20 million people don’t have a job.

TA: What are some common misconceptions about South Africa that you’ve encountered here?
GF: First it would have to be that it is a very safe place. It is not a very safe place, I myself have been shot at multiple times through the window and what have you. Many people I know have been killed in violent acts and things like that. One of the more obvious preconceptions would be that we have lions walking around in the street and things like that. Also the fact that people see that we are more of a perfect society than we are – they think everything’s great, we are the rainbow nation, we were saved from bloodbath and therefore everything is cool – and it’s not.