That special moment: A look at App’s special teams 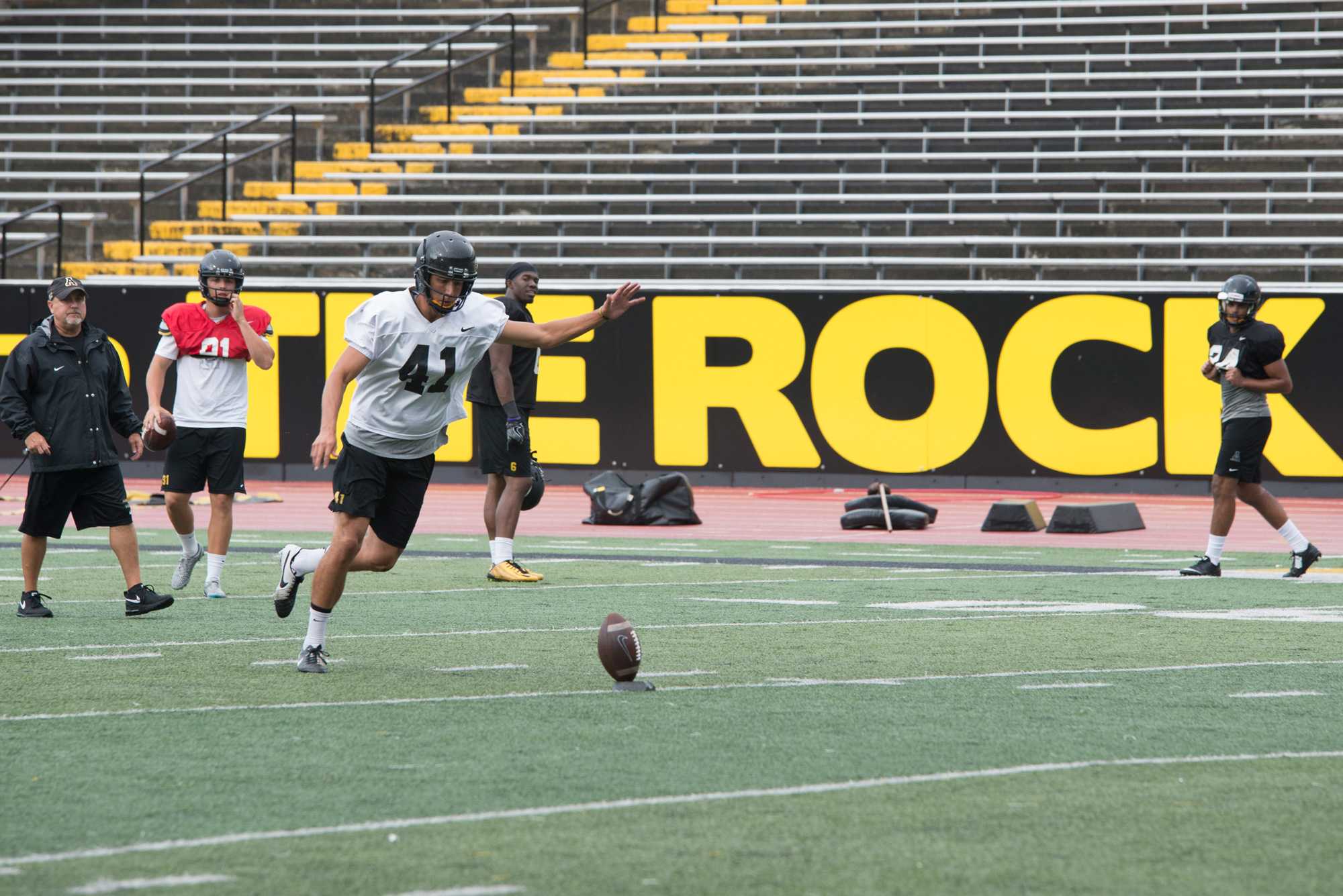 The Appalachian State Mountaineers aren’t known for their plethora of quarterbacks who lead college football in passing yards. They aren’t known for the running backs that go through and become NFL hall of famers or their size up front compared to that of their opponents. What they are known for, however, are moments that become unforgettable.

Ten years ago, Appalachian State became a household name when they went to Ann Arbor, Michigan and took down Goliath. With 24 seconds left in the fourth quarter, kicker Julian Rauch put a 24-yarder through the uprights and created a two-point deficit. After Corey Lynch blocked the Wolverines’ final chance, that field goal became more than just a two-point deficit.

Nine years later, Goliath turned into Tennessee and Rauch was a redshirt freshman named Michael Rubino making his college football debut in front of 100,074 fans, a sea of orange and white and only a speck of black and gold.

With five minutes remaining in the fourth quarter, Rubino set up to try a 42-yard field goal and a chance to take the lead. He missed. The Mountaineers went on to overtime and lost 20-13, resulting in another moment that became unforgettable.

Fast forward to the last game of the 2016 season: The Raycom Camellia Bowl Championship. With 5:14 remaining on the clock, Rubino set up for a 39-yard field goal to take the lead. A year previously, his predecessor, Zach Matics, was in a similar position when he kicked the game winner as Rubino watched. That moment then became his and he kicked the go-ahead field goal to win 31-28.

Special teams has defined Appalachian State football for the last 10 years and will continue to do so. Whether the outcome is considered the greatest upset in college football history or the biggest disappointment of the season, special teams has been at the forefront.

Rubino is in his second year as a starter and has had more than enough adversity under his belt. Along with having every eye of more than 100,000 people on him and winning a championship, he has also managed more. Toward the end of the season against Troy, Rubino nailed a career long 47-yard field goal, landing at fourth longest in the Sun Belt Conference.

Rubino said this year, it’s all about gaining confidence in his leg and maintaining it.

“I know I can do it. It doesn’t matter where I’m at, just kick the ball,” Rubino said. “I know what it’s like to make a lot of field goals; as a kicker, I mainly remember the misses, that’s what drives me.”

Special teams coach Stu Holt echoed Rubino and said that they know he is talented and they aren’t worried about what he can do this season.

Aside from the field goal unit, the job for starting punter has been a battle since the end of last season. For the last four seasons, Bentlee Critcher has dominated the position. Last season, Critcher sent seven balls 50 yards or more with a season high of 59 yards. He managed to land 21 punts inside the 20-yard line and was only blocked once. Critcher was also sneaky with the fake plays and racked up 28 rushing yards.

Critcher has graduated, and now looking to take his spot is a very familiar face in his younger brother redshirt freshman Rylee Critcher.

“It’s definitely motivating, I love competition,” Rylee Critcher said on the opportunity to win the job.

Rylee Critcher has a lot to live up to if he wants to maintain the family name as the Appalachian punter this year.

Competing for the job is a true freshman in Xavier Subotsch from Melbourne, Australia. The Mountaineers added Subotsch to the roster this past summer and are excited for him to be a Mountaineer.

“Both guys have shown they can do it we just have to find the guy who’s more consistent,” Holt said.

Against Georgia last Saturday, Subotsch punted eight times for a total of 301 yards. He averaged 37.63 yards per punt. Critcher punted once from the red zone for 39 yards.

Other notable student-athletes to keep in mind are the wide receivers sophomore Darrynton Evans, senior Ike Lewis and true freshman Thomas Hennigan. As a true freshman last year, Evans returned a crucial kickoff in the Camellia Bowl back for 94 yards to take the lead 28-21.

Hennigan joins the team listed atop the depth chart at punt returner and brings valuable speed to the return team. The speed of Lewis will be handy in any situation and will no doubt be used this season again.

“I like where we are, I think the guys are bought in and working hard,” Holt said.

With the history that Appalachian State has, special teams will always play a pivotal role in the Mountaineers’ game plan. The Wake Forest Demon Deacons are making a trip up to Boone this fall in another game that is likely to be sold out. On top of that, the Mountaineers were picked early to win the Sun Belt Conference again but a strong Georgia Southern team may pose a threat. The two are set for Sept. 23 and Nov. 9 in Kidd Brewer Stadium.

Special teams cannot and will not be looked over this season. Whether it’s the speed from the return team or Rubino’s leg, another defining moment will come. If history means anything, these Mountaineers will always be ready for their moment.