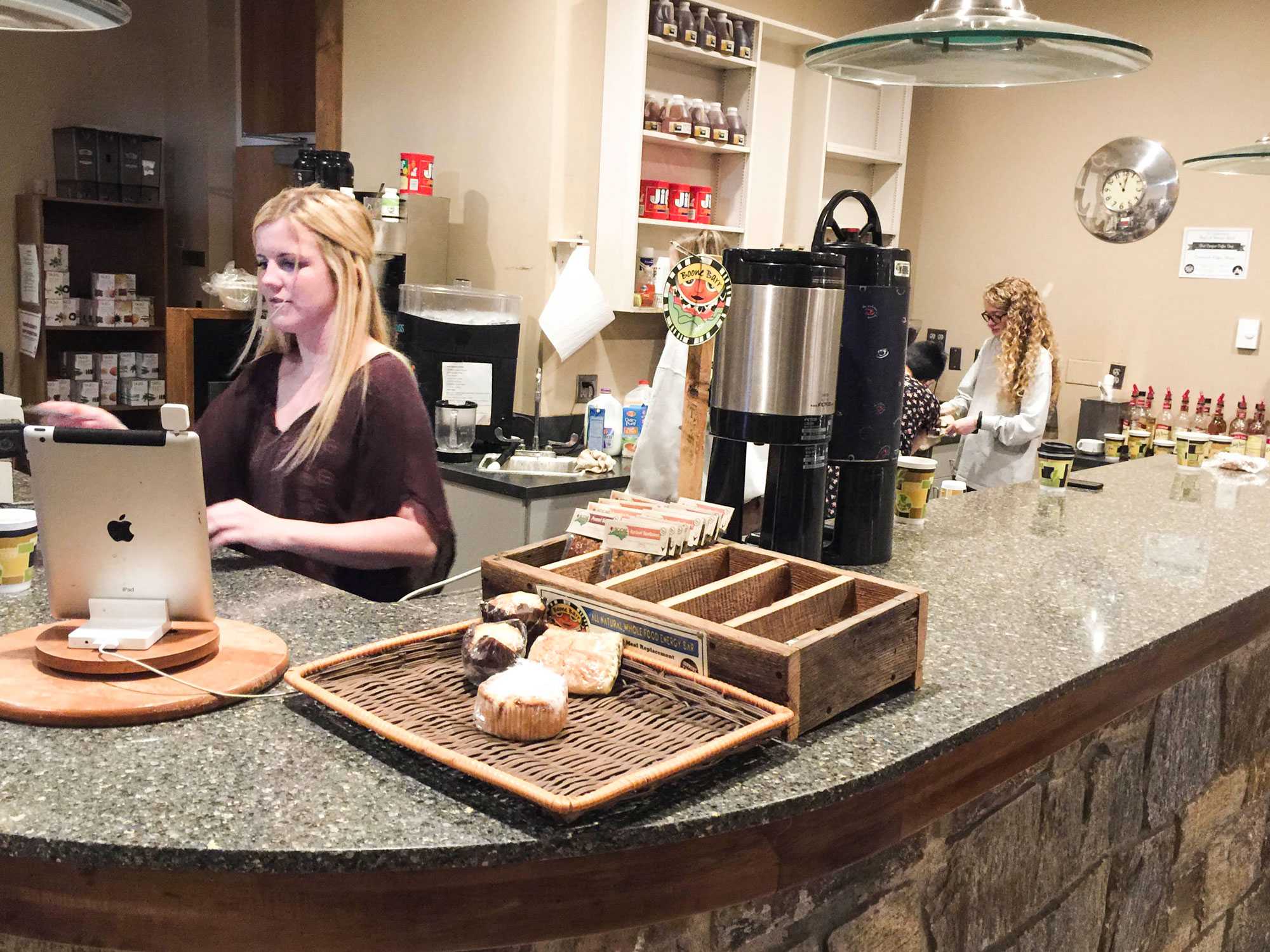 Crunch time is upon students as they enter the last week of the semester. Boone is home to some of the coziest coffee shops that are perfect for cramming for finals and escaping the chilly weather for a warm cup of Joe.

Bald Guy Brew on King Street in downtown Boone was established in 2007. It is a staple for local poets and crafters. About three years ago, Bald Guy Brew was named Alchemy Coffee Shop, but the name was changed to reflect the store’s exclusive use of Bald Guy coffee beans.

Located in the same building as Bald Guy is a bead shop called Strand, that allows customers to choose their own beads and craft their own jewelry.

Bald Guy Brew located beside Strand is not affiliated with the Bald Guy Brew in Valle Crucis, but is an extension of the bead shop that exclusively sells Bald Guy coffee.

Melanie Harsha, Bald Guy Brew barista and 2015 App State alumna, said, “I am a coffee snob. I would not just work at any coffee shop, I work here because I know that the coffee and beans are good.”

Harsha’s favorite drink is the chai latte, which is one of Bald Guy Brew’s specialties because of the owner’s secret recipe.

Unlike other coffee shops around, Bald Guy allow dogs inside and accommodates customers with free Wi-Fi. Harsha explains that this space is not the quietest, but it is great for students to meet and work on group projects or for people who want to sit, chill and listen to music.

The playlist is barista’s choice and Harsha describes her playlist as mostly The Avett Brothers while her co-worker plays Emancipator. “We try to keep the playlist family friendly, especially during the day,” she said.

For food, Bald Guy Brew offers cookies from Appalachian Cookie Company and bagels.  “The owner really liked the idea of people coming and staying here for four hours or more even if they only spend $2,” Harsha said.

Bald Guy Brew sells seasonal specialty drinks and for winter there is the peppermint mocha and London Fog, a drink made with Earl Grey tea, vanilla and steamed milk. The cheapest drink is a 12 ounce drip coffee and the most expensive is a large specialty drink that costs about $4-$5.

Bald Guy hosts open mic night every Wednesday night from 7:30 p.m.-9 p.m., and it is the only night the coffee shop is open past 7 p.m. At open mic night there is a variety of acts such as comedy, poetry and music. Even though poets usually dominate the open mic, there is an opportunity for everyone to perform.

Espresso News opened in 1993 and is located at a “hidden” location on Howard Street, local coffee fanatic Allison Samperi said.

With seven bar seats, two four-top tables, five two-top tables and a more private and quieter “feng shui” upstairs that seats 15 to 20 people, this coffee house is tucked away between Footsloggers and ECRS Retail Automation Solutions in downtown on Howard Street. It is a short walk away from Walker Hall, which makes it a perfect spot for Communication and Math majors after class.

Douglas Watson, a molecular biology major and Espresso News barista, said his favorite drink is a triple americano. The cheapest coffee option is an espresso shot or a 12 ounce coffee totaling $1.75, and the most expensive drink is either a smoothie or a white mocha latte, which costs about $4.95. There are also homemade pastries and soup ranging from $1.75- $5.

“We are known for our organic beans that we sell a lot of to local businesses like Boone Saloon, Proper and Hob Knob Farm Café,” Watson said.

Abi Shaki, a senior English major whose favorite drink is a dirty chai, also works as a barista at Espresso News. “Espresso News is also known for its in-house roasted coffee, roasted by the owner Uijin, who is the overseer of Espresso News and is really cool,” she said.

The music is selected by the barista and Watson describes his choice playlist as “anything from Death Grips, to Earth, Wind and Fire, and Earl Sweatshirt or Weezer.”

Shaki’s playlist depends on the weather. “If it is rainy or dreary out I will usually play ambient music. When it is sunny I will play energetic music. Winter is coming so you will probably hear me playing Tycho-like music,” she said.

Espresso news is trying to organize monthly or bi-monthly music shows, and Watson said lately there has been “a good kind of weird” alternative music playing at Espresso News.

Shaki describes Espresso News as a “meeting place” for students and friends. She believes that coffee shops are a place of reconciliation and a space for people to discuss life and problems. “This coffee shop has good energy and has been open for almost 22 years, and there has been so many spirits and bodies in and out,” she said. “I feel so honored to work here.”

Wired Scholar is conveniently located in the Belk Library and Crossroads is close by in the Plemmons Student Union and are both owned by Shelly Parsons.

Each spot sell the same drinks and the pastries and donuts are from Local Lion. For Fall season there is also hot apple cider. At the Wired Scholar, there are salads, quiche and cheesecakes available from Red Onion Café.

Katie Hudgins, Wired Scholar barista and senior psychology and health studies major at App State, said her favorite drink is a mocha latte. Hudgins describes the most popular drink as the “turtle,” which is a latte with chocolate, caramel and hazelnut syrup.

“We accept meal plan money here which accommodates students when they don’t want to use ‘real money’ to pay for coffee,” she said.

Jordan Lancaster, senior advertising major and barista at Wired Scholar, describes the coffee shop as great study environment. “Since most of our customers are students, we try to keep a very student atmosphere,” Lancaster said. Pandora is used for the music most of the time, he said.

Barista Jason Prigge’s  favorite drink is a varietal drip and Kre Voight, a barista at Crossroads, prefers an espresso over ice. Crossroads is available for booking any event such as music to Greek life functions. On Monday nights there is live jazz, Wednesday is open mic night and Sunday nights are trivia nights.

Crossroads provides pastries from Local Lion and “Boone Bars,” which as Prigge describes, is “a local Cliff bar that is really good.”