Stacy Eggers: Lawyer, Boone native and Board of Visitors member 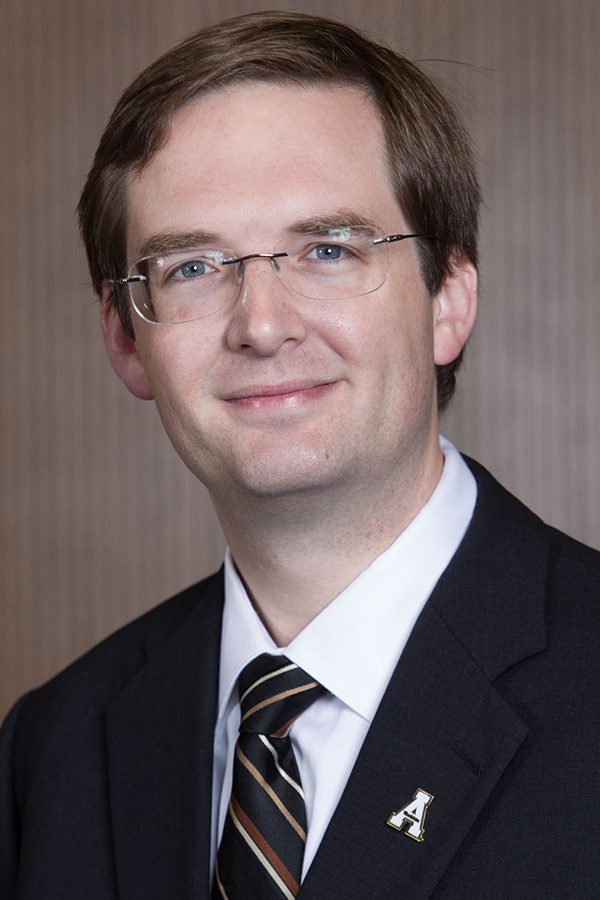 Stacy Eggers is a Boone local who graduated from App State. He works as a lawyer for his family firm.

Stacy “Four” Eggers IV firmly believed as a teenager that if he ever got into trouble or arrested, the bars in the jail would be for his protection from his disappointed lawyer relatives.

Eggers has lived in Boone his whole life and has taken on the business of his father and grandfather before him: law.

“The joke about it is that I don’t have any other marketable skills,” Eggers said.

Eggers described memories of Boone and App State’s campus from his view as a child.

“When I was in middle school, we’d ride the bus and stop at my friend’s mom’s office and drop off our backpacks and run downtown to have a hamburger and french fries at Boone Drug,” Eggers said.

Eggers said Boone Drug was a meeting place for the town, where lawyers and judges and reporters would go to the back room and swap “the day’s news.”

Eggers described stopping in town to talk to somebody and his son tugging on his arm, asking him to keep moving.

“I remember doing the exact same thing when I was little,” Eggers said.

Eggers was recently nominated by the North Carolina Republican Party to serve on the state Board of Elections. Gov. Roy Cooper did not appoint him, but Eggers served on the board in the past and is involved in local government in Watauga County.

Eggers serves as the municipal attorney for the towns of Banner Elk and Beech Mountain as well as the village of Sugar Mountain.

He said his family has always been involved in politics. The conference room Eggers sat in had two composites on the walls of the former North Carolina House of Representatives in the 1940s and 1950s, which pictured Eggers’ great-grandfather, Stacy Eggers Sr.

“My family has been in the Republican Party since the age of Lincoln,” Eggers said. “I’ve joked that we were probably Whigs until there was no longer a Whig Party.”

Eggers referenced “The Appalachian Family,” which he attributed to former chancellor  Kenneth Peacock.

Eggers graduated from App State in 1998.

The Board of Visitors assists the Board of Trustees and Chancellor Sheri Everts on public policy that will affect the university as well as fundraising activities and needs, according to its website.

“It’s really great to see the alumni that come together for the university,” Eggers said. “As soon as you meet someone, you almost instantly become friends with them because you have this strong Appalachian connection.”

Eggers said he was greatly affected by his relationship with his grandfather, who he became close to after his father died when he was 14.

“If you would have asked me what a judge looked like, I would have told you a judge is usually 5 feet 7 inches, balding in the front, very soft spoken, very reserved and very thoughtful,” Eggers said. “That was Judge Lyerly.”

He said Lyerly was the measure by which he measured all other judges were measured.

“If Judge Lyerly said, ‘Well, Mr. Eggers, I suggest that you do this,’ what he really meant was, ‘You will do this,’” Eggers said.

Eggers said he has always appreciated Lyerly’s friendship and guidance.

He described feeling like he can make a difference in other’s lives as a lawyer.

“I definitely like the small town office better than the big (firms),” Wiseman said.

Eggers is married to his high school sweetheart, Kimberly, and they have three sons together.

“That’s really what I think life is about, the relationships you build,” Eggers said.