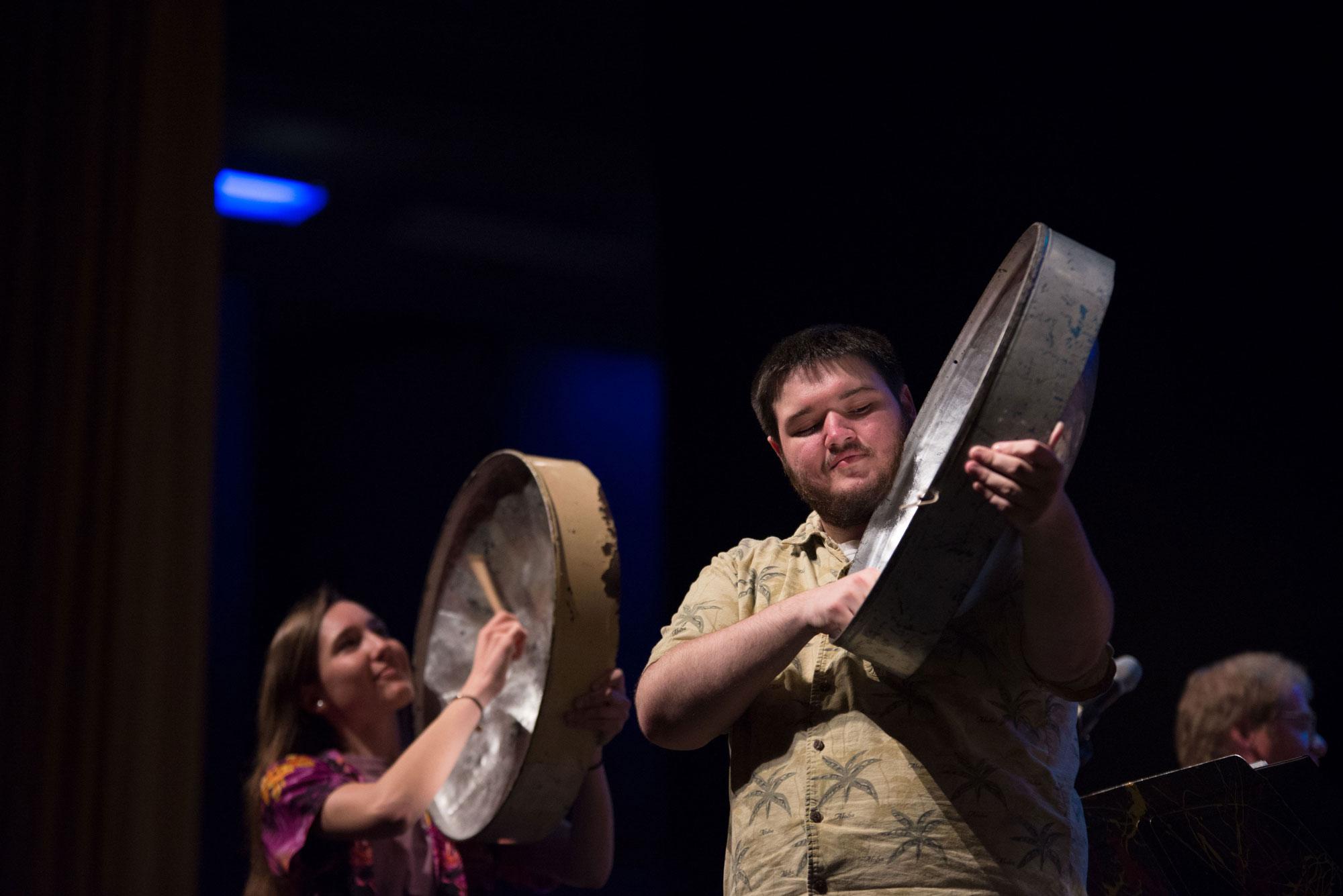 Eric Luke performing on stage during the Steely Pan concert at the Schaffer Center. The members of the band utilized movement and synchronized dance around the stage to captivate the audience on a whole other level.

Appalachian State’s Steely Pan Steel Band played a free concert on March 26 at 3 p.m. in the Schaefer Center for Performing Arts. Steely Pan is composed of 22 students and director Byron Hedgepeth, an adjunct instructor of percussion. Hedgepeth took over the class three years ago after former instructor and the band’s creator Scott Meister retired.

The band played a variety of tunes ranging from traditional steel band songs and children’s songs. Among them were Len “Boogsie” Sharpe’s “Birthday Party,” Roy Holman’s “My Band,” “Reptilia” by Julian Casablancas of the The Strokes, which was arranged by former student and Unaka Prong’s Jonathon Sale, “Pagliacci” by Ruggiero Leoncavallo, “Under the Sea,” by Alan Menken and Howard Ashman and “I Just Can’t Wait To Be King” by Tim Rice and Elton John. Phil Hawkins’ “Cha Cha Sandwich,” featured a solo by vibraphonist and junior music performance major Miranda Stone. The traditional songs were Aldwyn Roberts’ “Pan in A Minor,” Ellie Mannette’s “My Paradise,” and “Tamboo Bamboo to Steel.”

Hedgepeth said these songs were some of the traditional steel band numbers played at the music competition, Panorama, happening late winter and early spring in Trinidad and Tobago, where the steel pan was introduced. Hedgepeth said the pieces are usually long and intense, but gave students insight into the culture of the music.

The show closed with Alphonsus Cassell’s lively tune “Hot, Hot, Hot” during which the band members from each section came back on stage to dance and play the melody one more time.

Hedgepeth said it is great to see students nail a performance and without them there is no band because the drums do not play themselves.

“We learn from each other,” Hedgepeth said. “I need to be the one that leads but I’m learning from the students.”

Hedgepeth said learning the instrument is difficult and takes dedication to learn it and play it. He said it takes about one year to really learn the instrument.

“It is a very different type of culture that plays in Boone,” Hedgepeth said. “It is a beautiful thing, and takes a lot of heart, dedication and ability. They got that, it is the real deal.”

Aaron Collins, a junior electronic media broadcasting major, is in the basses section and started playing in the band in January. This is his first year with the group and he said one of the only challenges of playing pan is how they are arranged.

“I think it is challenging how the drums are set up,” Collins said. “The instrument is not really predictable in the way that the notes are laid out so you have to really work and learn how the instrument visually looks and how to apply it.”

Collins’ friends from his a capella group, Enharmonix, came out to support him on Sunday. Kiera Massi, a freshman electronic media broadcasting major, said the show was fun and she was into it the entire time.

“It was so fun and colorful and brings a smile to your face,” Wrenn said. “It was a good time.”

Tom Furmanek, a junior interdisciplinary studies major, is in the tenor section and has been playing steel pan for six years, although it has been his passion for almost 10.

“I heard their unique voices I just wanted to learn more and learn how to play them,” Furmanek said.

He said once he really learned how to play about three or four different types of steel pan, he wanted to start learning how to make a pan.

Although Furmanek has not been to Trinidad or Tobago, the closest he has gotten was two years ago when he went to Pensacola and met a man named Alan Coyle. Furmanek described Coyle as “truly one of the greatest steel pan makers in the world.” Furmanek said Coyle learned from the creator of the steel pan, Ellie Mannett.

“That was my first taste at the real world of steel drum making,” Furmanek said.

Stone said even though the instrument takes some getting used to, her favorite part is getting to play for community events and elementary schools.

“That is actually how I got into steel pans, because I saw this group, not knowing it was this group when I was in second grade,” Stone said. “Then I didn’t find that out until after I was in this band. That is a big recruiting event.”

Steely Pan plans to play at the elementary school in Hiddenite, North Carolina on April 7. Brady Kennedy, junior music performance major, is the percussionist in the engine room section for Steely Pan and said the band is shooting to record and update the 10-year-old album. Kennedy said hopefully that will happen next semester.