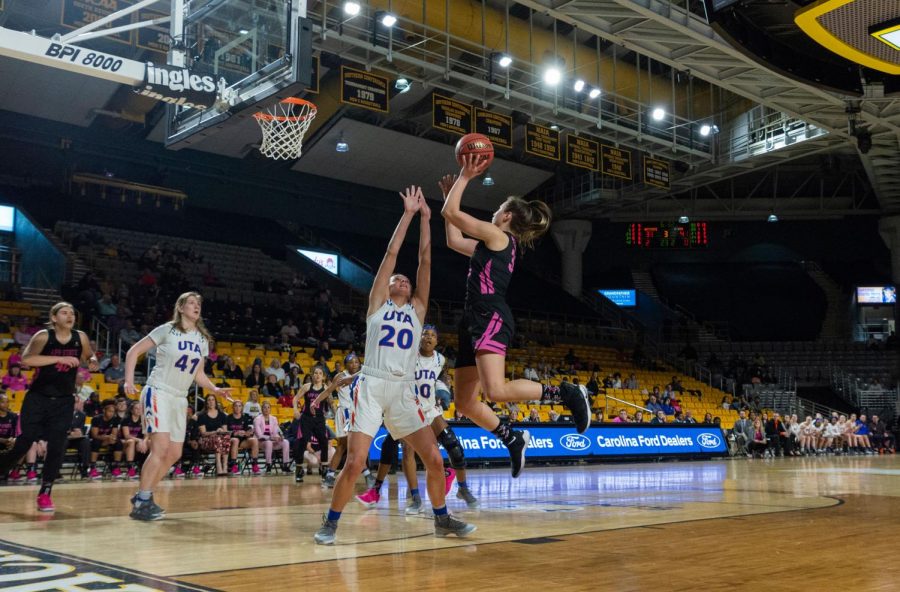 There has been a serious culture change for the App State women’s basketball team in recent years. Last season the team made it to the quarterfinals of the Sun Belt Conference tournament before getting knocked out by the defending champs, the University of Arkansas at Little Rock.

“Coaches always want a certain attitude out of their team. There’s always an expectation from us,” women’s basketball assistant coach Same Pierce Jr. said. “Ultimately, you want that attitude to be player-driven, the players need to facilitate.”

Redshirt senior guard Madi Story has been that facilitator, both on and off the basketball court.

Story began her career at App State in 2014 after a successful career at Bandys High School in Catawba. She lead the team in scoring and steals, reaching the 1,000-point scoring milestone as a sophomore.

She was named All-Conference and All-State all four years; and was the Bandys High School all-time leading scorer with 2,156 career points.

Story continued to develop as a player under Elderkin, becoming a more dominant points scorer and rebounder each season at App State. Her freshman year she had a career-high 14 points in a single game, and her sophomore year she averaged 12 points per game.

Story averaged 13.3 points per game and rebounded at a team high 6.9 per game her junior year. She finished that season ranked No. 9 in the Sun Belt for scoring and No. 7 in rebounding, earning her a third team All-Sun Belt selection.

“The biggest obstacle I’ve had to overcome in my time here was obviously tearing my ACL,” Story said. “That was tough, but thankfully I had my coaches and my teammates there to support me.”

Story sat out the entire 2017-2018 season with a torn ACL. Despite not competing, she became the first team captain Elderkin has ever named in her time coaching at App State.

In the face of a serious injury, Story was a leader in the locker room and on the sidelines by motivating her team and keeping spirits up in the face of adversity. Elderkin believes Story’s attitude is one of her finest qualities as a leader.

“She has a relentless work ethic and a passion for the game that is hard to find,” Elderkin said. “She doesn’t take a possession off, offense, defense, doesn’t matter she is finding a way to be involved however she can.”

App State is 5-2 in its last seven games, holding opposing offenses to an average 61.4 points per game. Its record stands at 12-9 overall with eight games left before the start of the Sun

With their bench players shooting nearly 50 percent from the field and 44 percent from the three point line, App State is building momentum in a key part of their season. Story and her teammates hope to carry this momentum into the postseason and make it past the quarterfinals of this year’s conference tournament.