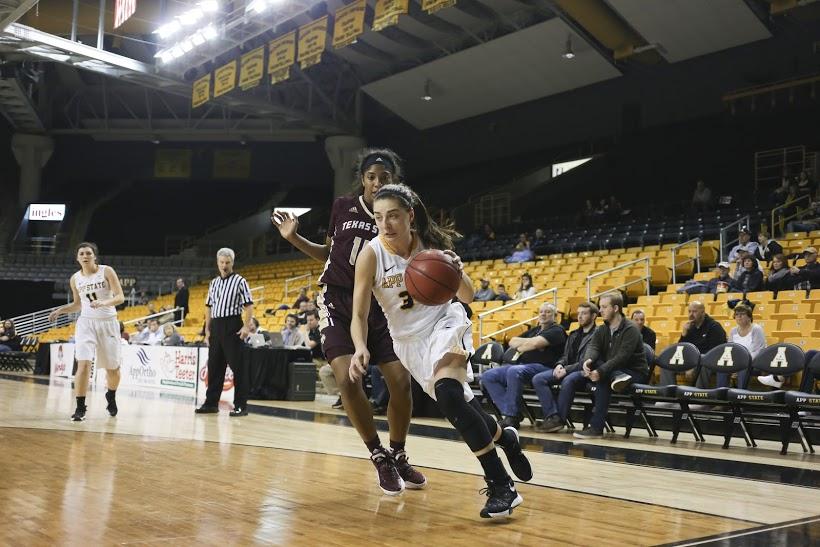 Sophomore guard Madi Story drives to the basket during Saturday's 90-71 win over Texas State. Story scored a career-high 31 points in the victory.

After having arguably one of their worst losses of the season just two nights before against UT Arlington, a 76-45 trouncing, the Mountaineers were able to bounce back taking an early 22-13 lead in the first quarter and never looking back.

Going into the second quarter with a 7-point lead, App State failed to make a field goal for the first six minutes of the quarter. Texas State pulled within two points before senior forward KeKe Cooper helped lead a 7-4 run giving App a 37-32 at the half.

App went into the half thinking they should have a much larger lead, a result of shooting 28.6 percent in the second quarter.

“We weren’t satisfied being up five at halftime and we responded to that coming off a loss,” Story said

Shots began to finally fall for the Mountaineers, as they bounced back to shoot 71.4 percent from field following the half. Madi Story sparked an incredible boost of energy with 7:44 remaining in the quarter, hitting three straight baskets in the paint while also being fouled — all in roughly 39 seconds. She missed all three free throw attempts but gave App a 47-40 lead.

The run helped the energy throughout the team and gave the Mountaineers a 63-56 lead heading into the fourth quarter. The lead came with only one 3-pointer on a mere five attempts.

“We didn’t settle for many shots outside of the paint and it showed our commitment and toughness,” head coach Angel Elderkin said.

Defense and aggressive play in the paint helped App pull away in the fourth quarter. Cooper pulled in her second double-double of the season with 14 points and 11 rebounds.

“We came in ready to play today. We didn’t want to have another game like Thursday,” Cooper said.

Texas State seemed to have no answer for Story, as she finished the game shooting 11-15 and went 8-13 from the charity stripe.

“She was unstoppable,” Elderkin said. “She had fakes and got to the rim. They didn’t do anything to stop her and she was in the zone.”

App State pulled away for a 90-71 lead while shooting only 4-8 from three and holding Texas State to 38.2 percent from the field. Five players scored double digits and after a lopsided loss just two days earlier, the win helped App get back on track.

“I am proud of the resiliency of our team to be able to turnaround 48 hours after having a really tough game,” Elderkin said. “We were able to come back and play the brand of basketball we have learned to play.”