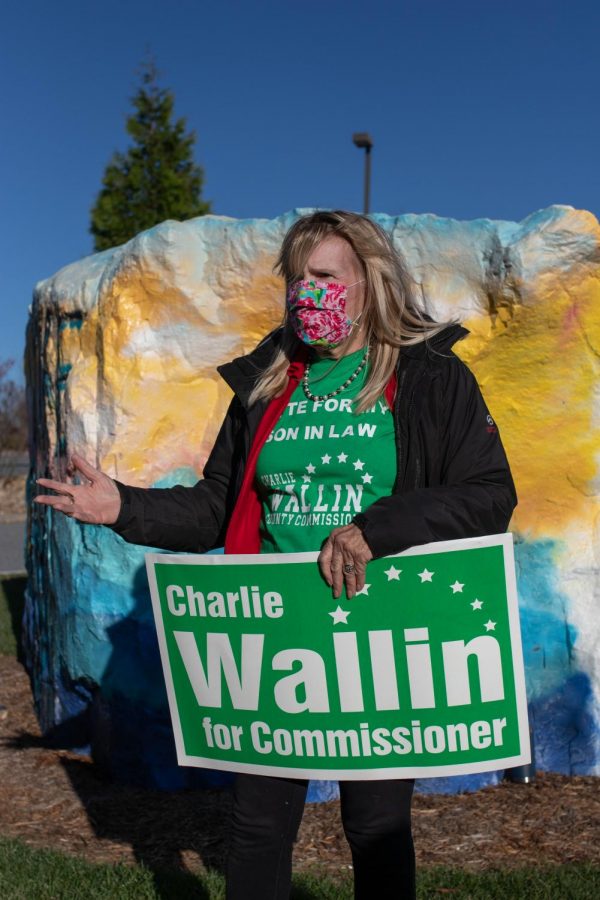 “The local elections are so important because they have such tremendous impact on your life. I just feel really strongly about that.”

Nancy Hight, a West Jefferson resident, campaigned for her son-in-law, Charlie Wallin (D), who ran for reelection as a county commissioner. Wallin won his campaign. She said it’s important for community members and App State students to vote on the local level during a monumental presidential election. This race, Hight yearns for a unified country paired with unified personal relationships.

“I’m hopeful that we will have a new administration in. Very hopeful. I just think it’s terrible what’s happened and how it’s divided the country. It’s divided life long friends of mine, I no longer feel close to them because to me, it’s such a huge issue. For them, it all comes down to money.”

“Local is dear to my heart when it comes to education.”

Elizabeth Shukis campaigned for Board of Education candidate Ronny Holste outside the polling site at Hardin Park Elementary School. She volunteered to campaign for Holste as he attends a Bible study with her and is a “good friend.” Holste did not win his campaign for the board. Shukis had been at different polls throughout the day and said she values education in the local elections.

“We fought several battles together.”

Boone resident and former App State professor Dennis Grady campaigned outside the polls supporting “good friend” Ray Russell (D), who ran for reelection for a seat in the North Carolina House of Representatives. Russell lost his campaign to Ray Pickett (R). Retired and back in Boone, Grady said he had to help with Russell’s first campaign after he called “out of the blue.”

“We had a very successful run two years ago. Hopefully we’re going to repeat it today … I’d never seen a campaign where the same people who were at the first meeting were also at the last meeting.”

Grady, precinct captain for the 1996 election at App State, said it was tougher for students to vote back then. He said they were “the key” to Russell’s election in 2018 and played the same role on the national level in this presidential election.

“I think the students are more engaged now, I think there’s more at stake. They probably understand the stakes better now.”

“It’s been slow and steady. Everybody’s been in good spirits and pretty friendly. It’s funny because I’ve got Ray Russell literature here and then she’s got Ray Pickett. We’re both getting along amicably.”

Boone resident Dabney Smith passed out literature outside the polls at Hardin Park Gym. A “Democrat down the line,” Smith said she’s eager for the country to come together and defeat COVID-19.

“I’m kind of ready for (the election) to be over in a way. I want to know, I wonder if we’ll know anything tonight.”