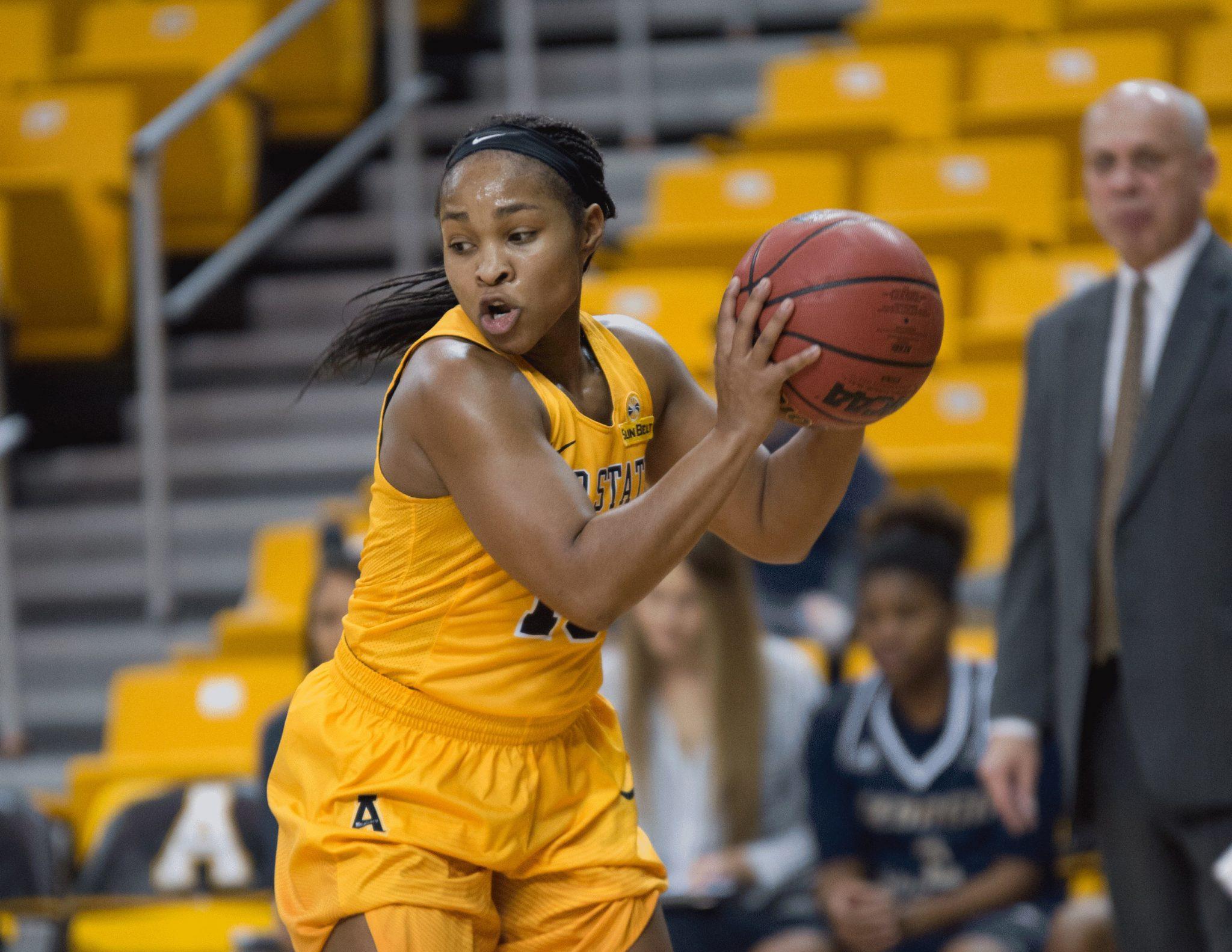 Senior guard Joi Jones, grabs the ball and looks around for an open team mate to pass the ball to. She went 7 for 10 shots and managed to grab 7 rebounds the entire game against Georgia Southern.

After losing momentum and ultimately falling to Georgia Southern last month, App State was looking for payback, and they got that payback in a big way.

Trying to fight back into the game, the Eagles would cut the lead to 17-7 at the end of the first quarter, but the Mountaineers would maintain a ten point lead into halftime.

Dominating on the boards, the Mountaineers used their 46-33 rebounding advantage to outscore the Eagles 23-5 in second chance points. Senior guard Bria Carter notched her third game on the season with ten or more rebounds, bringing down a game high 10 boards.

“It is a big part of my game, rebounding,” Carter said. “I wasn’t really scoring throughout the game so I knew I had to pick it up in another area.”

Emulating their first half success, the Apps started the third quarter with an 8-0 run, pushing their lead to 38-20. This time, however, junior guard Madi Story supplied the offense, draining three three-pointers in the third quarter.

The Mountaineers finished the game with eight triples and would fall one short of tying their season high.

Assisting on 19 of 29 shots, App State was able to quickly move the ball, which lead them to getting off 14 more shots than the Eagles.

“The ball movement against the zone was the best we have attacked the zone this season,” head coach Angel Elderkin said. “Once we started making that extra pass, we got uncontested, open shots and we were knocking them down.”

Four players were in double-digit points and the Apps were able to eclipse the 70 point mark for just the third time this season to push their record when scoring over 70 points to 7-0 on the season.

The Mountaineers also held the Eagles to 32.7 percent shooting on the night, including shutting down Georgia Southern’s outside shooting. Averaging around 10 triples per game, the Eagles were held to 3-22 from behind the arc.

“We started the game in a half-court trap that we’ve been working on,” Elderkin said. “Knowing Georgia Southern and how they play, very slow and methodical, we thought it would be the best thing to start with the press and get them disrupted early.”

“Blocking shots is probably the favorite part of my game,” Bassett-Smith said. “Everyone knows on this team I like to block shots, and they hype me up.”

The Mountaineers will finish up their homestand this weekend as they will host Georgia State, who they defeated 67-63 earlier in the season.