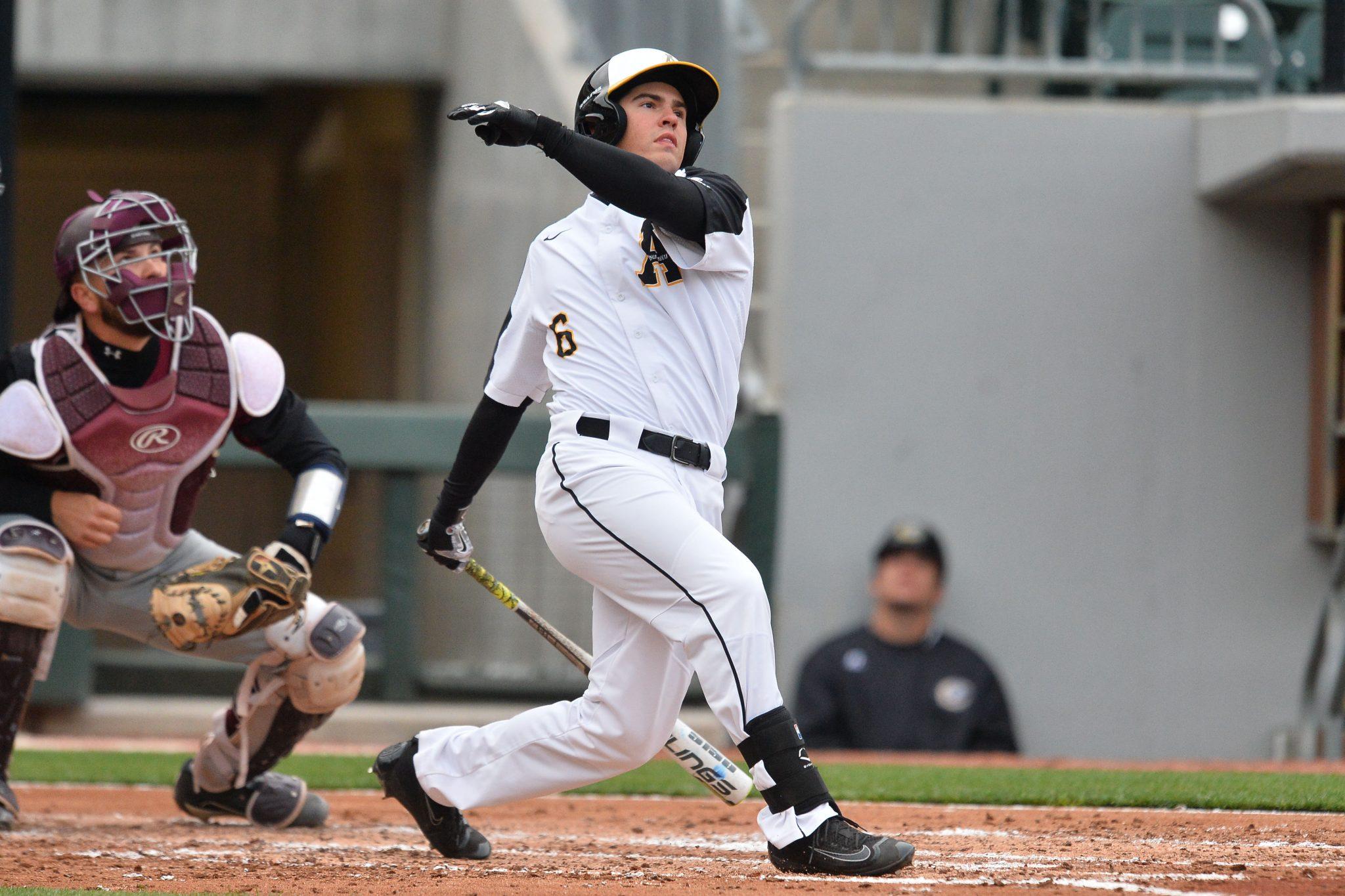 Tyler Stroup finished the game 4/5 and became the second App player in the last 14 years to hit for the cycle. Photo Courtesy: App State Athletics

In a comeback effort, the Mountaineers baseball team overcame a four-run deficit in the top of the fourth inning to win the game 13-9 against the Radford Highlanders (8-12). The game was highlighted by junior left fielder Tyler Stroup becoming just the second Mountaineer in the last 14 years to hit for the cycle.

The Apps (10-11, 1-2 Sun Belt) struck first after a scoreless first inning, and put up the game’s first two runs in the bottom half of the second inning.

After a quiet first inning, junior designated hitter Chandler Seagle had the team’s first hit with a single through the infield. Senior right fielder Brian Bauk would then ground into a fielder’s choice and advance to second off a stolen base. Stroup got his career day started with a single to left field, bringing home Bauk and getting the first run on the board.

“I didn’t really think about it at first,” Stroup said. “Until I got my triple, I was in the on deck circle, and I thought, if I hit a homerun here I could hit for the cycle, but once I got in the box I didn’t think about it at all, let me hit the ball hard, get on base and hopefully score again.”

The Mountaineers would find themselves down 7-3 going into the home half of the fifth, and that is when the bats would catch fire. Senior second baseman Matt Vernon doubled to the right field fence, putting a man on second and third, and junior catcher Connor Leonard would walk, loading the bases.

“I feel like that’s something we’re really good at this year,” Vernon said. “Coming back from if we’re down, that’s something that we improved on this year. I have confidence throughout the game no matter what the score is.”

In the inning, Seagle would blast a two RBI double, a wild pitch would score one, Stroup’s RBI double and junior Centerfielder Drake Zupcic hit an RBI single up the middle to make it five total runs in the inning, giving App the lead 8-7.

The Highlanders would add two more runs in the top of the sixth via homerun and wild pitch with the runner scoring from third, giving them the lead back 9-8.

Stroup would then get the Apps right back into scoring position with a stand up leadoff triple off the fence, and he would be brought home by a single from Calev Grubbs tying the game at nine. Vernon would then add to his great day, crushing the go-ahead homerun to deep left field, a ball that would hit the tops of the trees at Beaver Field at Jim and Bettie Stadium. One more run would score that inning to give the lead to App 11-9 and they wouldn’t look back.

“We got down but coach always says we have more innings to play,” Stroup said. “It’s never a loss that early. We thought that we had innings to get runs and we did.”

Vernon would end up hitting two for three with two RBI’s and two runs scored on two home runs. A career day for him, his first multi home run game in his Appalachian State career and the first this season for the team. This game would also boost his batting average to .302 on the year, which leads the team.

“I was trying to get a fastball to hit,” Vernon said. “I wasn’t really trying to chase anything down. Coach talked to me before my homerun and told me to get my pitch and don’t swing at anything in the dirt and that’s what I did.”

Stroup would strike again in the bottom of the eighth to give the Mountaineers some insurance, scoring his inside the park home run which also brought home Bauk from second.

Nobody would score in the ninth and the Mountaineers sealed their second home win of the season 13-9, giving junior pitcher Tristan Helms the win, which is his first for the season.

App finished the game with 15 team hits, the most in a game this season, making it four of their last six games to post eleven or more in a game.

“I didn’t say a whole lot to them,” head coach Kermit Smith said. “They have been through this before and looked at our coaching staff and said this is an opportunity to see what we’re made of.”

App has averaged 7.3 runs a game in their last six games, winning four out of those six games.

The Mountaineers are now in the midst of a five-game home stand. They will open home conference play at home against Texas State this weekend.