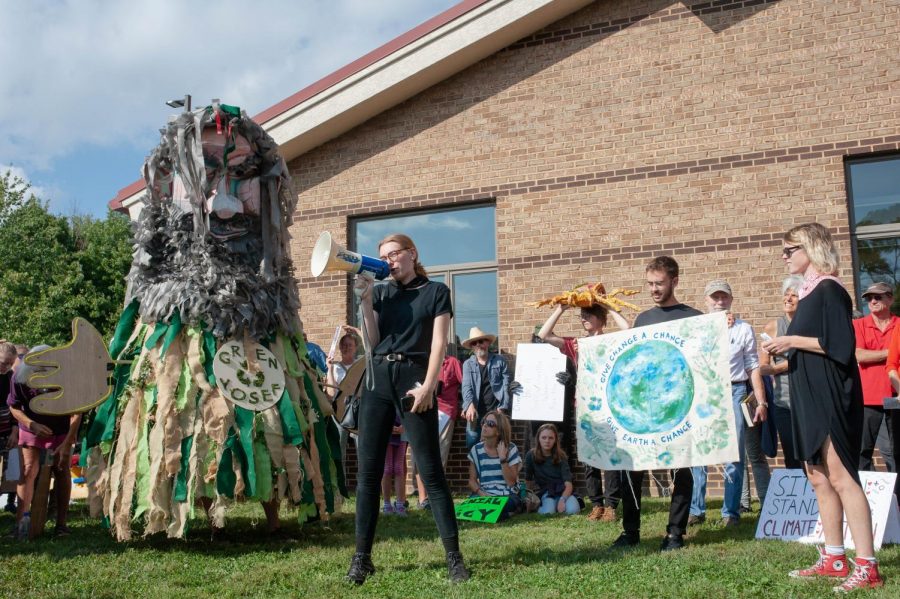 After working alongside App State to make the university climate neutral, the Climate Action Collaborative withdrew from the university’s official process in August to create its own climate action plan.

The collaborative, also known as ClimACT, is a group of students, faculty and community members who envision a world where human-driven climate change could not happen, according to its website.

On Nov. 3, ClimACT released their “Just Climate Action Plan,” a six-chapter, 71-page document that explains how App State could become climate neutral. This means the university would not strain the climate and would have net zero greenhouse gas emissions, a balance between the emissions produced and the emissions eliminated.

The university climate action plan, AppCAP, was released by the Office of Sustainability on Nov. 12 and outlines the path for complete carbon neutrality by 2050 and significant greenhouse gas emission reduction by 2025.

ClimACT offered steps to have net-zero greenhouse gas emissions by 2022 in its “simple ‘neutrality’ by 2022” option.

ClimACT established themselves in 2018 after a report released by the Intergovernmental Panel on Climate Change explained the consequences if the Earth’s temperature rose 0.5 degrees Celsius to 1.5 degrees.

Michael Weiss, a ClimACT organizer, said the group believed if they didn’t act soon, that “disaster on a wide scale” would be inevitable.

ClimACT said the university currently spends $6.3 million on electricity, natural gas and carbon offsets. The group proposes that, rather than using nonrenewable energy, App State should purchase its energy from renewable sources. Accounting for the remaining greenhouse gas emissions, ClimACT advocated that App State purchase carbon offsets, essentially paying to fund a greenhouse gas reduction project elsewhere, to make up for the emissions caused by the university.

The “simple ‘neutrality’ by 2022” plan, ClimACT acknowledges on their website, does not make App State climate neutral, because although they’d be funding sustainable projects elsewhere, purchasing carbon offsets will not stop App State from contributing to climate change.

They advocate against reliance on simple “neutrality” because, according to ClimACT’s website, it could give a false impression and allow climate change contributions to continue as usual with a “clean conscience.”

The group says this plan would cost $7.4 million, a $1.1 million increase representing 0.26% of the total university expenses in 2019.

However, ClimACT argued that App State may be further behind than it realizes. The group said that the university is “vastly” undercounting its actual contribution to climate change by not including many of their polluting activities and using a 100-year time horizon, evaluating climate change on a 100-year scale rather than a 20-year scale which ClimACT advocates for.

Weiss said the group is trying to send a message to the university and show that a goal of climate neutrality by 2022, viewed as radical by many, is possible.

“To say that 2050 is the only reasonable goal, our … simple ‘neutrality’ shows that is untrue in so many ways,” Weiss said.

Although ClimACT says climate neutrality by 2022 is possible, they argue more long-lasting solutions, like weatherization of homes and agroforestry, need to be implemented by 2025 at the latest.

Agroforestry, intentionally planting trees for environmental benefit and human use, would sequester or suck up carbon through the soil year after year. According to ClimACT, sequestering App States non-electric emissions through agroforestry would cost $13.7 million. ClimACT adds that $11.2 million in student fees go towards athletics every year.

The university has not responded to the CimACT plan being released.

Weiss said that the group appreciated being invited to the table with the Office of Sustainability during climate action talks but felt their voices were not being heard.

“They did make an effort to include us. But doing that in the presence of power relations… it’s tough to navigate,” Weiss said.

Lee Ball, Chief Sustainability Officer for the Office of Sustainability, said the office worked hard to make the process as collaborative as possible and was sorry to hear their thoughts.

“I am hopeful that the university can find a way to harness the passion of ClimAct in a way that draws upon the strengths of our common interests,” Ball said.

On their website, ClimACT said they expect little results from the App State administration, adding “Please –– surprise us!”

Weiss said the reason these seemingly simple changes have not been made because of who makes decisions at public universities.

He acknowledged that the Office of Sustainability is constrained by university and UNC System administrations. He said the Board of Governors and board of trustees are made up of “wealthy neoliberalists” who only have an interest in free trade and accumulating wealth.

ClimACT hopes to adjust the power structure and allow those who are impacted by decisions to take part in the decision making process. The group will be hosting a public forum in the future to ensure they are letting the community lead the process.

Weiss said the group hopes to inspire a new framework to look at climate change through. He said ClimACT wants to use climate neutrality as a way to not only stop contributing to climate change, but to boost the Boone economy and empower the community in a just way.

The collaborative and the Office of Sustainability have both emphasized the importance of incorporating climate justice into their plans and ensuring people’s lives are being improved along with the environment.

ClimACT members believe App State should be a leader in tackling climate neutrality. Weiss encouraged members of the Boone community and App State students to support ClimACT by advocating for action and joining the public forum in the future.

“It’s not going to matter unless students and community members show up and ask why App State is doing these things,” Weiss said.