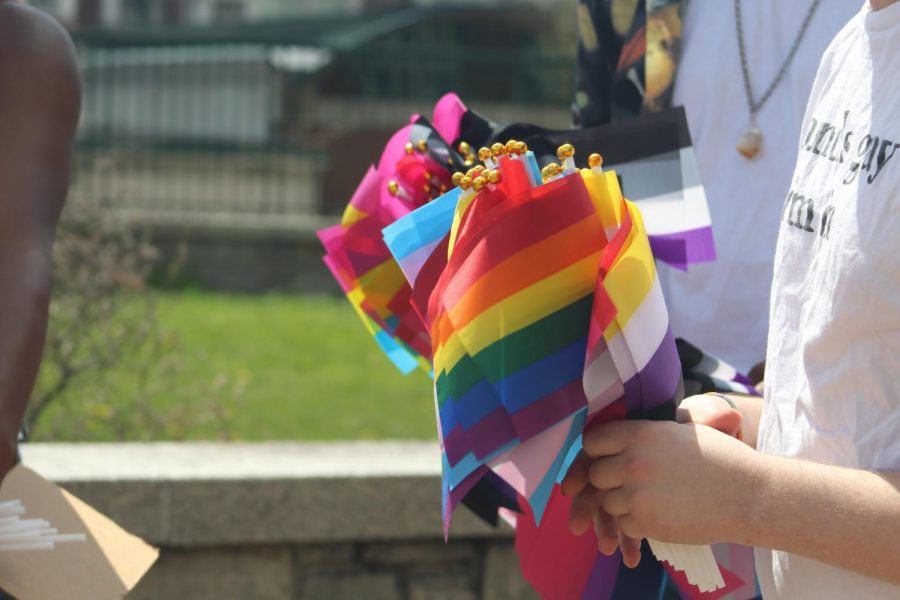 Students holding Pride flags during the Day of Silence event on Sanford Mall.

Dozens of white signs and pride flags lined Sanford Mall as students gathered for a Day of Silence rally on April 9.

The Day of Silence was started in 1996 by two students at the University of Virginia as a way to protest discrimination against LGBTQ students. Every year, typically on the second Friday in April, participating students go an entire day without speaking. To emphasize their silence, students often wear tape over their mouths throughout the school day. Students don’t speak until the end of the day when they gather together at a “Breaking the Silence” rally.

App State sophomore Ty Critchfield, who uses he and they pronouns, organized the rally on Sanford Mall.

This year, COVID has complicated the tradition of tape-wearing, and many students found it harder to carry on this tradition at the university level, Critchfield said. This led Critchfield to emphasize the rally itself than the day-long vow of silence.

“That’s what this event is all about: knowing that you are not to be silenced,” Critchfield said.

The rally included live music, drag performances and slam poetry. The performers included Kentucky-native rapper Akhil Warrier; App State student and musician Dee; and drag queen Molly Pocket. Students also passed out free stickers and pride flags. Critchfield said they designed the Boone rally to be something like a “mini Pride event” that would be peaceful and fun for everyone.

Critchfield said they wanted to expand this event to include the Black Lives Matter movement in light of the protests that followed George Floyd’s death last year.

Each sign had the name of a person of color or member of the LGBTQ community who was killed last year. Critchfield said there were just over 200 signs, but the list of names was not exhaustive because information about many of the victims was limited.

Critchfield said that each sign represented a person who died at the hands of unnecessary violence and whose life “was cut short for basically nothing.”

“You look at the names that’s posted up. It puts things in a very surreal perspective,” said Jade Deweese, a student who was at the rally. “I realize that I could have been one of those statistics last year. Knowing that some of the names are part of my community, it’s kind of terrifying.”

Critchfield said they hoped the rally would help people see that just because someone looks different or lives a different way, they’re not any less human.

“It’s just so important to understand just the magnitude of this issue,” student Jordan Henes said. “It’s so much realer than we think.”