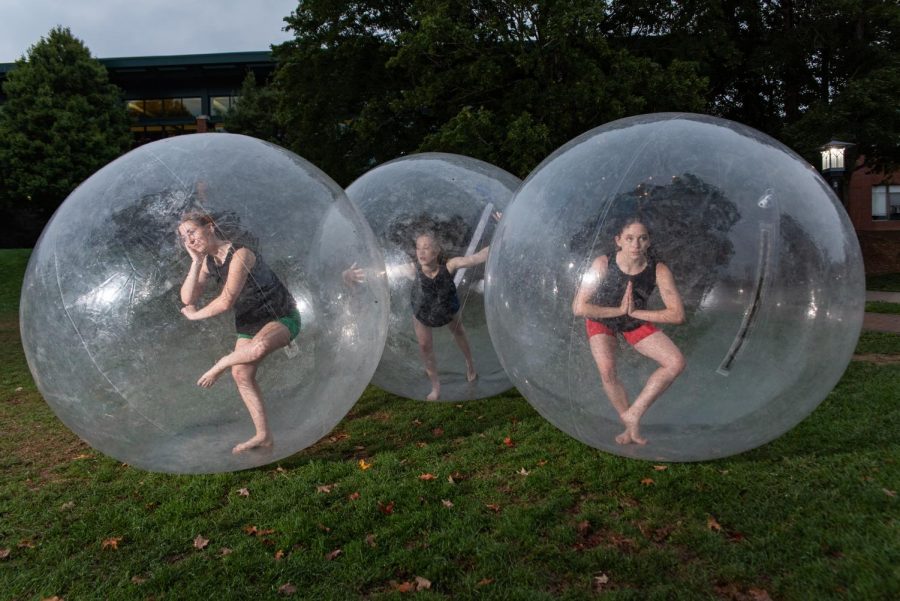 Courtesy of Lynn Willis from the Department of Theatre and Dance.

The First Year Showcase's theme this year was "In Our Bubbles," which was inspired by performances during COVID-19.

For the first time in over a year-and-a-half, students are getting the chance to return to in-person performance.

First Year Showcase is an annual performance focused on giving freshmen and transfer students the opportunity to perform in front of an audience within their first semester at App State. While typically held inside IG Greer Hall, this year’s First Year Showcase was held entirely outside Sept. 24-26.

Under the direction of faculty members Marianne Adams and Gina Grandi, their theme was “In Our Bubbles,” which Adams said was inspired by watching students perform while under COVID-19 regulations. In fact, the inspiration is possibly more literal than one would expect.

“I had considered making a piece where dancers were inside of these large vinyl bubbles,” Adams said. “I thought it would translate really well for the First Year Showcase.”

Wary of COVID-19 regulations, the performance was separated into four outdoor stations. Each station focused on a different aspect of performance while utilizing campus “found spaces” to act as their individual venues. The choice to perform outside was both a product of COVID-19 cases increasing as the summer went on and a creative decision to develop  “site specific pieces” in response to campus architecture, Adams said.

Each location was specifically chosen to suit the needs of the actors and dancers in the showcase. A tap-dance performance utilized a concrete patio next to B.B. Dougherty Hall, a theater performance was held at a study space found outside of Anne Belk Hall, and a dance was performed on a hill just outside of IG Greer Hall. Finally, students were found on Sanford Mall performing “Stuck Inside,” a dance piece performed within large, clear vinyl bubbles.

The head stage manager, Lindsay Douglass, a sophomore theatre design technology major, said the usage of these outdoor spaces is something that made this performance especially unique.

“These are all places that every App State student has walked by, studied at or just been at before,” Douglass said. “The biggest difference here is that we aren’t inside a theater, and we aren’t performing a script. It’s not what you typically think of when you are going to watch a play.”

For Janis Nordeen, a sophomore theatre design technology major and assistant stage manager for First Year Showcase, being back in person, even if it’s outside, was critical.

“Being able to see people in more than just Zoom boxes is so relieving,” Nordeen said. “Getting to be in person and being able to actually be with people while doing it has been so rewarding. It feels like I’m really a part of something.”

Nordeen recalled during the period where heavy COVID-19 restrictions were still present on-campus, performances had been moved to a Zoom environment. Performers were given higher discretion of direction, but with the cost of not feeling as engaged due to the nature of the online environment.

Similar to this period of Zoom performances, students were encouraged to help design their performances from the ground-up, something Grandi calls “devising theater,” Nordeen said.

For example, Assistant Director Tori Borgia, a sophomore ​​theatre arts education major, said the theater performance, entitled “Alice’s Bubble,” was “designed 95%” by the student performers and was a result of the practice of “devising theater.”

Similarly, two dances were choreographed entirely by students. In an after performance discussion, Auriella Rosendahl, a sophomore dance studies major, said that the piece she choreographed, “Holding on,” was about “holding on to our sanity during these tough times,” and “the reactions and dynamic between the two dancers.”

Taking these performances outside was “definitely complex” for First Year Showcase,  Nordeen said. However, the privilege of being back in person did not go unappreciated.

“It’s definitely different because it’s outside,” Nordeen said. “I’ve never done a show that is in separate places but all together. But it feels like live theater again. It’s the best part.”