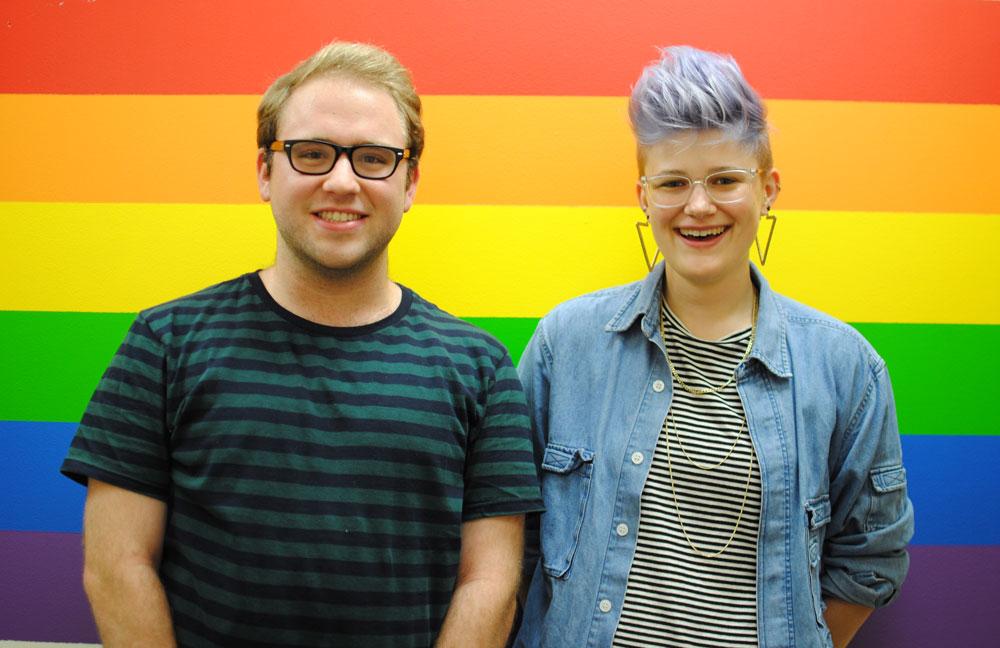 Sophomore social work major Joe Wrenn and public relations major Shady Kimzey in the LGBT office Monday afternoon. Wrenn plans to help with the LGBT table at Homecoming and Kimzey is the chair of the social justice coffee hour committee. Photo by Nicole Debartolo | The Appalachian

Appalachian State University students are campaigning against the MSM blood ban prior to the upcoming annual homecoming blood drive.

Joe Wrenn, a sophomore social work major, and Amber Daniels, a freshman sociology major, are leading efforts to acquire signatures to a petition against the ban. The petition was started several years ago with help from Wrenn’s brother and Appalachian alumnus, Tommy.

The petition has gathered over 1,200 signatures so far.

According to the U.S. Food and Drug Administration’s website, www.fda.gov, the blood ban defers men who have sex with other men (MSM) from giving blood, while women who are sexually active with men who have had sexual encounters with other men are temporarily banned. Since the AIDS epidemic in the ‘70s, it is thought that they are at an increased risk for HIV, Hepatitis B and certain other infections transmitted by transfusion.

Wrenn and a team of 15-20 people, plus volunteers from the LGBT Center, will have a booth set up in the Holmes Convocation Center on Sept. 24 for the annual homecoming blood drive from 10 a.m. until approximately 5-6 p.m. to raise awareness and sign the petition. The blood drive is held from 8 a.m. to 7 p.m.

The team will be on the concourse of the convocation center, the loop above the gym.

A trifold display will be set up along with presentation slides. Signatures are being collected on postcards rather than one long petition, Wrenn said.

Wrenn said they will also be doing a photo campaign where people can pose in front of a backdrop with their postcards. The team will post the photos to their Facebook page throughout the day.

“We want to send pictures of our representatives to people with political power to remind them that this ban still does exist, that students from Appalachian State are concerned,” Wrenn said.

On Sept. 10 at 5 p.m. in the Appalachian and the Community Together office, the Social Justice Coffee Hour Committee held the first coffee hour of the year and discussed the subject.

“Before every big event, we’re going to do a coffee hour about the subject to try to increase the social justice awareness within the office and outside,” Kimzey said. “[The coffee hour] enhances people’s understanding of why we did the blood drive, because a few years ago, there were people at the university and in the LBGT community that felt like the blood drive was kind of discriminatory because of the MSM ban.”

Kimzey said she believes the ban is based off of stereotypes that stem from the AIDS boom in the ‘70s and ‘80s.

“There wasn’t really a lot of scientific fact behind those beliefs, especially now that it has been proven that the groups that are at highest risks for HIV are not men that are sexually active with other men,” Kimzey said.

Kimzey said many people don’t know that the ban exists, so their goal is to raise awareness.

“The primary resistance to removing the ban from what I can tell is a perception that there is a brief window of time after initial infection with HIV that it might not show up on a blood screen,” said Jeff Cathey, the director of Student Programs. “This results in fear that infected blood could make it to a recipient.”

According to www.redcross.org, in a joint statement about the National Gay Blood Drive, the American Red Cross supports a science-based deferral and suggest a change to a one-year MSM deferral.