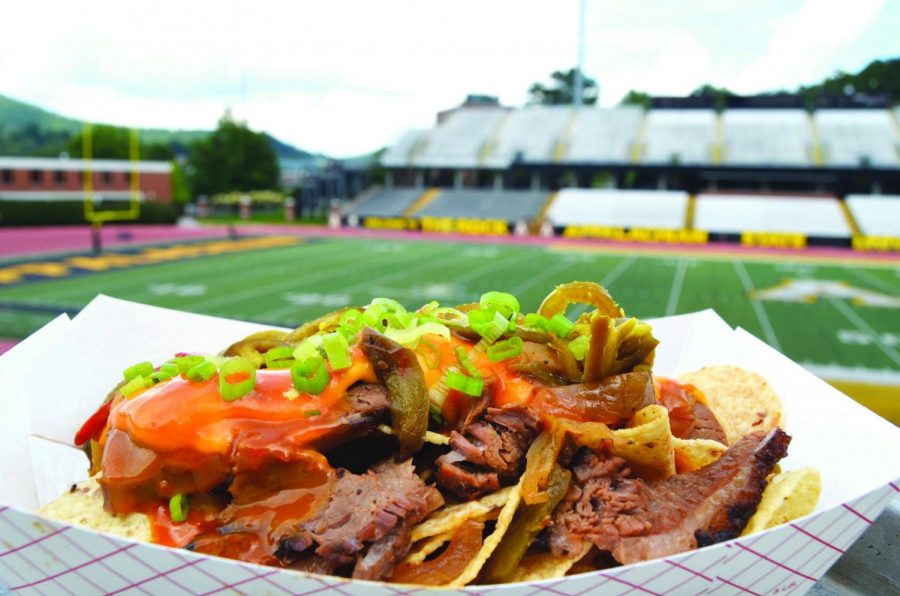 One of the featured dishes is brisket loaded nachos, which will be sold at the Smoke House: Hall of Fame stand. The menu was created by executive chef Tony Bates, who pulled barbecue inspiration from the Deep South. Courtesy of Food Services.

During the 2018 football season, for the first time in school history, App State students were introduced to a major change in the game day menu. Food Services chefs created the new menu with an eye on helping the student body and all fans better enjoy the game.

“I can tell they really put some thought into the food this year. A big part of Saturdays is always trying to get food before the game, but this season I was happy to wait and eat there,”  junior geology major Sean Hurd said.

One of the new fan favorites was the smoked brisket nachos created by executive chef Jules Bott and executive catering chef Tony Bates. Bates said he wanted to create a meal that embodied the South. The nachos come with the traditional fixings— peppers, onions, tomatoes, jalapenos and, of course, nacho cheese but on top is freshly smoked brisket and a southern-style mustard barbecue sauce.

“I have to say I had the nachos almost every Saturday. They were delicious,” senior accounting major Casey Quinn said.

Quinn said the 2018 football season was the first year in her four years at App State that she felt she got an actual meal from the stadium on game day.

Fan favorites held their place on the game day menu. Popcorn, jumbo pretzels, sausage with peppers and onions, and chips were all served fresh by Food Services employees.

“It was nice to go to a game on Saturday and see how this school is always trying to make everything better for its students and fans,” junior communication major Mason Stewart said.

Joining the new options on game days were several food trucks that rolled in from local restaurants. These stands include The Cardinal, Captain Jims and Woodlands BBQ. All of these trucks have been a hit with fans.

“I think on Saturdays you can really see how great the community of Boone and the whole of App State fans are,” senior parks and recreation management major Jacob Fain said. “By bringing in local restaurants and allowing the food trucks in the stadium, you are not only offering better food options for your fans but also granting exposure to a local restaurant. It’s really an awesome idea.”