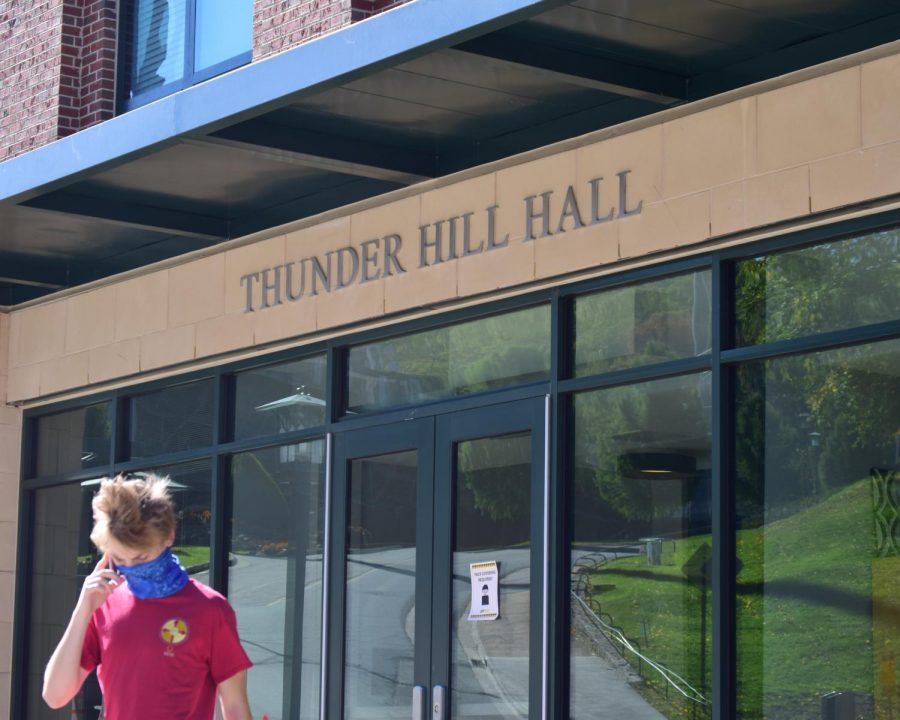 Students in Thunder Hill residence hall were relocated after encountering a leak in two suites Oct. 2.

At least six residents of Thunder Hill residence hall have relocated after a leak from a bathroom vent, impacting two suites on two floors.

University Housing and the Office of Planning, Design and Construction, which works with the contractor, said six plumbing leaks were discovered and repaired in Thunder Hill.

Residents Kalina Hanowski and Katie Hayes called maintenance Oct. 2. after discovering a leak in their shower ceiling and water coming from a vent.

University Housing said students needed to move out by the end of the day on Oct. 2 then later pushed their move-out to Oct. 5 at 6 a.m.

Hayes, Hanowski’s roommate, was sent home and was unable to relocate on campus due to being at high risk for COVID-19.

“App State is committed to maintaining clean living spaces and has engaged the appropriately trained and qualified professionals to ensure any potential for mold is completely mitigated and the highest levels of safety are maintained,” said Megan Hayes, chief communications officer for App State.

Workers have not encountered black mold, but housing is treating all areas conducive to mold growth of any kind with black mold response treatment as a precaution.

A few of the leaks were small and occurred for a few days. Others were immediate and short in duration before identification and repair. Out of caution, residents in the affected units were relocated and containment barriers were put in place.

Ten rooms were affected on the first through fifth floors, impacting a total of 20 students. The students are now living in other residence halls in suite or hotel-style halls until the situation is fixed.

These students will be credited with any difference from less expensive halls they were assigned to and Thunder Hill.

Hanowski said she knew of six people who had to move out.

“Myself, my roommate, my two suitemates, and the two people who live above us, as they also had a leak,” Hanowski said. “However, there have been many people who have had to move out in the past month due to this issue. It wasn’t organized at all.”

University Housing relocated Hanowski and her suitemates to Summit Resident Hall. Upon arrival, Hanowski had problems with her AppCard, which would not grant her access to the residence hall.

Katie Hayes also said University Housing was vague about the situation and how serious it was.

“All I know is that we had a small leak that was fixed, they cut a hole in our ceiling, and then called us two days later and asked us to move out so they could do maintenance in the bathroom,” Katie Hayes said. “I’m not even entirely sure what they’re doing.”

Housing told Hanowski and Katie Hayes they would have to move out for two weeks. There is no official move-in date for when the project is finished.

“Of course I am upset that I am spending two or more weeks at home and not with my friends, but I will say that I’m glad our health and safety is being put first,” Katie Hayes said.